Home
TV News
Who Cares if Sean Spicer is on Dancing With the Stars?
Prev Article Next Article 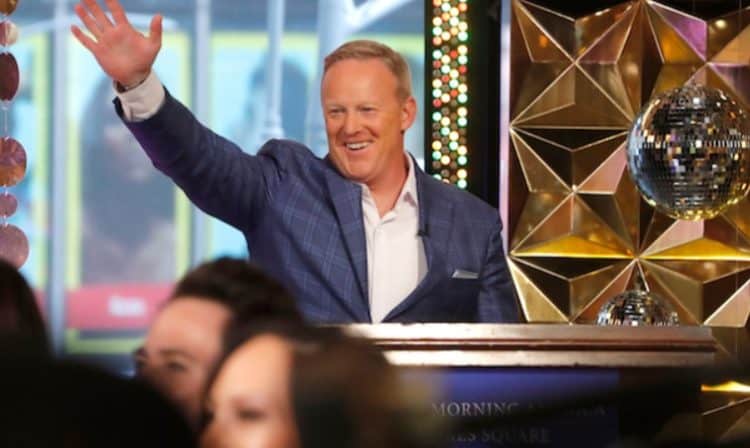 It’s been clear that we can’t all get along for quite some time now and it’s only becoming clearer now that Sean Spicer is coming to Dancing With The Stars. Obviously as TV Line has indicated, a few people aren’t too happy with this decision including Krista Vernoff from Grey’s Anatomy. The thing is, she’s not in charge, she doesn’t call the shots, and if she doesn’t like it, then that’s too bad. Those in charge of the show are hopeful that this coming season could be something that will continue to entertain the audience and give them something to cheer for without worrying too much about politics or the history that Spicer has with the American people. Let’s be honest, if everyone were to drag their skeletons out of the closet we’d likely be looking at some of our favorite individuals in show business in a very different light, so perhaps Vera needs to calm down a bit and remind herself that Spicer will not be advocating for President Trump while he’s on the show. In fact Spicer has made it clear that he’s not seeking any political lean with the show, as he simply wants to come on and do his thing without taking the time to anger anyone or upset them with rhetoric that obviously wouldn’t be welcomed.

It’s interesting how some actors will gladly call out those that they have issues with based on politics or perhaps other issues when it’s not their call, doesn’t affect them, and has no bearing on their job or their life. Human nature is a tricky thing at times it would seem but sticking one’s nose in the business of others seems to be a normal everyday occurrence for some folks. Sean Spicer has of course infuriated a lot of people in his time simply because he was employed by the Trump administration, but even now being an ex-employee it doesn’t seem to matter since his appointment to the show is still ruffling feathers. Michael Schneider of Variety had to chime in with his own two cents to indicate that Hollywood is basically poking a hornet’s nest every time they deal with someone that might not be among the many ‘approved’ individuals that those in show business would want to work with. A lot of times it would seem that anyone who’s had anything to do with Trump is simply not welcome in their vicinity, which is increasingly frustrating since it takes that ‘tolerant’ viewpoint that Democrats and liberals love to rant about and tears it to shreds the moment that they decide that they simply don’t want to associate with someone who was connected to Trump. At this point it seems as though it wouldn’t matter if Spicer publicly denounced his former boss for the whole world to hear, people still wouldn’t trust him.

The issue with this of course is that not only does it fail to promote an inclusive atmosphere, it seeks to continually divide people based on what they’ve done and not what they’re looking to do. So Spicer was an issue for many people when he was employed by Trump, that’s obvious. But considering that he’s not coming to DWTS to promote the president or in any way share his beliefs concerning conservatism or anything else should mean that people can relax and take a breath before rushing to judgment. Trying to exclude people based on what they’ve done and who they’ve worked for in the past is a very subjective practice that could end up biting someone in the rear eventually, and trying to demonize this action would only harm those that are actively speaking out against it. While politics are definitely being used by politicians and the media, let’s not forget their contribution, to keep people apart in a big way, it’s also quite likely that people are making up their own minds and simply going with the flow when it comes to being told who they have to hate and why. The remarks by Krista Vernoff are rather childish and a bit naive if she thinks that simply whining to the execs about keeping Spicer away from the network is going to do any good, especially since the amount of pull she has isn’t great enough to make such a thing happen.

So yes, people don’t like him, a lot of liberal Hollywood might not like him, but the popularity contest that is show business is going to have to accept it at this point since he is coming on the show. If they wanted to suddenly grow up and be decent, civil human beings as they seem to think they are in any case, then it might be that they’ll remember that, as adults, it’s more important to accept people for who they are than judge them for what they’ve done.