Home
Entertainment
So Who’s The Guy That Does Movie Trailer Voiceovers Today? 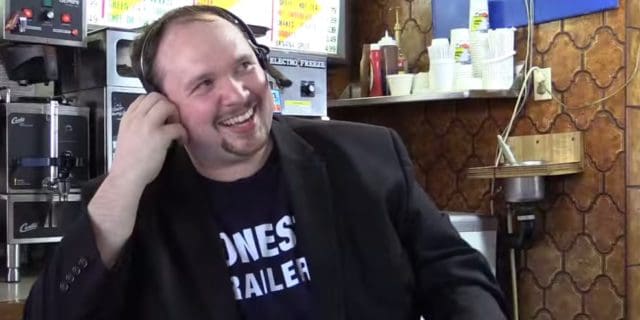 Have you ever wondered who it is that does the voice for movie trailers? Previously, the late Don Lafontaine provided the magnificent strong voice that was heard in many of the popular trailers. Since his passing, there are several voice actors who have taken over the job, but one has risen to lead the pack. Jon Bailey is the talent behind many of the more current movie trailers that prepare us for the blockbuster films being released. These actors often remain in obscurity because all we really know of them is their voices.

Here are some things that you need to know about Jon Bailey, the new voice narrator for movie trailers.

Jon Bailey began voicing the Honest Trailers with what is called his “epic movie trailer voice.” He is a natural who began making parodies of movie trailers which were aired on YouTube. Not a lot has been known about the man behind the voice because we don’t get a name or a voice on the trailers. Honest Trailers takes the requests of viewers and then turns the trailers from blockbuster films into parodies. Bailey shared that it takes the crew approximately one week to put the videos together.

Jon is a professional voice actor

He has an amazing voice that lends itself to narration, announcing and voice-overs well. He began his career in 2009. He has done more than three thousand trailers but he has not limited himself to this genre. He has supplied his voice for a variety of documentaries, promos, ads, toys, animations, video games, reality shows and sizzle reels and digital media. Some of the more popular games that he is found in include “Halo Wars 2,” Graveyard Carz,” Dishonored 2,” and “Transformers: Combiner Wars.”

He is a family man

Jon Bailey’s voice is very well known, but this is where his notoriety ends for most. Behind the voice is not only a talented professional, but also a real person. He married his wife Amanda Lee on June 24, 2000. The couple is still together and they have four children together. He was born under the name Jonathan Bailey Crumpton. He dropped the Crumpton to assume a professional name in the entertainment industry as is the practice of many in the profession.

Bailey is more versatile than the late greats

While there are many who would argue the point, the truth of the matter is that Jon Bailey is capable of doing more voice styles than his famed predecessors Don LaFontaine and Hal Douglas. They are indisputably amazing, but Jon has shown his capacity by doing voice overs for a little bit of everything under the sun. Trailers his voice is heard in are all over the map from action and drama to romance and comedy. He has an innate ability to do it all. He began his career by doing the traditional straight laced voice overs. He quickly learned that in order to make it in the parody genre, he had to be versatile enough to do whatever was required. Jon rose to the challenge and performed remarkably well.

Another thing that the world needs to know about this talented actor and family man is that he is financially stable. While some pros in the entertainment business end up on the rich end of bankruptcy, this is not the case with Bailey. His estimated net worth is at $850,000.