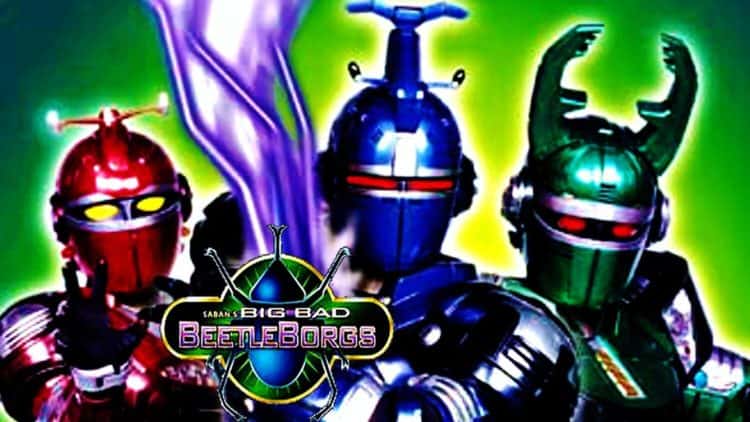 Let’s be clear here, the Big Bad Beetleborgs wouldn’t be any crazier than any other kids’ show that’s out right now and it might actually be that this idea could gain some serious ground if it was to be brought back in some form. There have been plenty of Power Rangers knockoffs throughout the years and a lot of them have given way to the evolution of superheroes that are basically kids in costumes with powers, which is what the Beetleborgs were. Much like the Power Rangers the Beetlborgs did eventually evolve in the second season and they did continue to come up against other enemies and situations that reflected the risks that the producers were willing to take with the story. Seriously, these were kids that were fighting in life or death battles with monsters, any other issue might have been kind of pedestrian when considering the overall trauma of a sword fight with a monster that wants to suck your brain out of your skull. The main case for bringing back the Beetleborgs is pretty simple: it’s one more show that kids would eat up when it comes to merchandising and the overall series. This time around it might need an upgrade to the story and the actors, but overall it could stay pretty much the same without having to get rid of or add too much. Kids are still entertained and amazed by actors in costumes pretending to duke it out with each other, and despite the Japanese influence that made this show possible there’s still plenty that was Americanized in a big way while keeping the overall feel of the culture that the idea came from.

If anyone recalls, there were a lot of these types of shows that came out as a way to mimic the Power Rangers, and they all had their own fair share of quirks, as the BeetleBorgs were high-tech warriors that came from a comic book and instead of having some galactic talking head as their adviser they had a ghost that had been trapped in a magical organ that, once played, released him, whereupon he granted them a wish that ended up turning them into the armored warriors known as the Beetleborgs. Taken in this light it doesn’t sound like anything too insanely impressive, especially since the show was dialed down to a modest and very manageable limit that could entertain kids and at the same time not scare the living hell out of them. After all, the movie monsters that were a part of the show, God knows why but it made sense to a lot of people, were basically caricatures of the movie legends that people have idolized for so long. Plus, the monsters were so ridiculous that trying to take them too seriously was virtually impossible given that some of them really made it look as though the design department had given up halfway through the process and decided to throw together whatever they could find. Some of the villains had a pretty intense look, but others were just, well, obviously showing a lack of real creativity or sense when it came to their overall design.

Bringing back the Beetleborgs would be a move that might make a lot of people that grew up in the 90s kind of nostalgic even though they only lasted two seasons and weren’t nearly as widely known as the Power Rangers, who kind of cornered the market when it came to super-powered individuals that had been granted their abilities by an outside force. This would need to be a kids show first and foremost as that’s how it came in and that’s really how it should remain. But apart from that there could be a lot of expansion on the idea and it could be that the Beetleborgs could become another popular idea for the kids when trying to get them into yet another superhero show that is basically centered around a younger crowd given that the heroes in the story are still kids and not yet teenagers. It’s a though really, but it’s one that will have to wait along with many others since the COVID-19 virus is still a very big issue and is stalling any and all production that might otherwise be going full tilt at the moment.

When the virus is finally dealt with or beaten back enough that life can go back to normal, or what passes for normal, it’s a big hope that studios will push forward with their current projects and start looking at a few ideas that might have appeared to have come and gone years ago, but could be given another chance. After all, the Power Rangers were given another chance at the big time, and despite flopping a bit there’s always a chance that someone else could improve upon the formula.