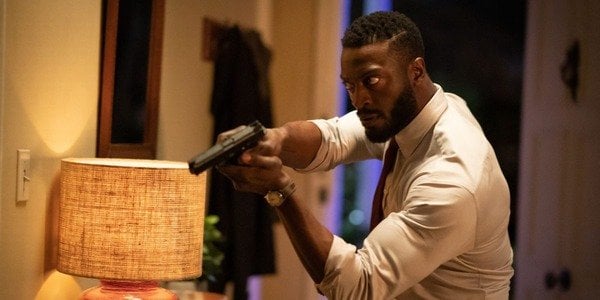 Aldis Hodge has already made a pretty big name for himself by starring in a couple of big movies that have strengthened his on-screen reputation and even gained him the role of Hawkman in the upcoming Black Adam movie. As the reincarnated spirit of an Egyptian prince, it’s likely that a lot of people are thinking that it would make more sense to see a man of color playing the role since Hawkman has primarily been seen as a white man in the comics with an impressive set of armor and wings that basically gives him the name. But there’s a lot more to the character than just his looks, since Hawkman is, as you can imagine, a very intelligent character that’s also exceptionally tough and capable with several types of weaponry, as well as insanely tough since that’s usually how memorable DC characters are made. But placing him in the Black Adam movie is bound to be a good move since Hodge is the type that simply looks as though he belongs in an action movie, whereas Dwayne Johnson has been an action star for a while. But the fact is that the two characters being in the same movie is bound to confuse a lot of people since, in terms of power and strength, it does appear that Black Adam has Hawkman beat quite easily.

There is an idea that perhaps the JSA will become a part of the movie since it features some of the older heroes such as the original Green Lantern, Flash, and Doctor Fate, but at this time it’s hard to say since there have been a few facts released about the movie, but not as many as people would like. The announcement of Hodge as the chosen actor for Hawkman is one of the most prominent announcements at the moment, and apart from that, the idea of Dwayne Johnson playing the titular character is bound to be more than enough to get people to watch. The movie is slated to be released in December 2021, and barring any unforeseen problems it could happen on schedule. There’s a bit of confusion when it comes to Hawkman though since he’s been seen to fight Black Adam in the comics, and he’s been seen to have his butt handed to him as well since Black Adam ripped off one of his wings during a fight. One of the biggest questions is just how strong Hawkman is going to be portrayed as and what his abilities will be since this is a hero that has a pretty serious skillset when it comes down to what he can do.

In a sense, it all depends on how over the top DC really wants to go with the character since we’ve already seen from the Justice League that Doomsday can take on a trio of heroes and hold his own for a while, and even Steppenwolf can take on an army of Amazonian warriors but can’t handle on Kryptonian. Wondering how tough Hawkman is going to be will be easy for a lot of people since having seen how tough Shazam is, and knowing that Black Adam and Shazam have roughly identical power sets, it’s going to be interesting to see how someone who can reincarnate, has a tendency to use large and very dangerous weapons and can fly due to the magical Nth metal that’s bonded with his body, will stand up against someone that’s nearly on Superman’s level. Through a good deal of his time in the comics, Hawkman has been one of the heroes that a lot of people think are cool, but others have wondered about more than once. He does kind of look like a guy in a hawk mask emulating He-Man in a way, but it’s also likely that he’s far tougher than some people want to give him credit for. One thing is certain though, Aldis Hodge is going to need to stay in pretty good shape to play this character since a bodysuit likely won’t cut it. Thankfully the actor is one of the many that knows how to get ready for a role, so there’s no concern there.

Casting for the DC movies has been questioned more than once, and some people still feel that Grant Gustin should take Ezra Miller’s place, or that Jason Momoa might not have been the best choice for Aquaman, but the movies we have at the moment are what is there and what people are willing to work with. So far the few foibles that DC has made on screen have been largely forgiven, but haven’t done them any favors either. Hopefully, Hodge will be the addition that the movie needs, and hopefully Black Adam will go off without a hitch since it already has a couple of talented individuals to help it along.