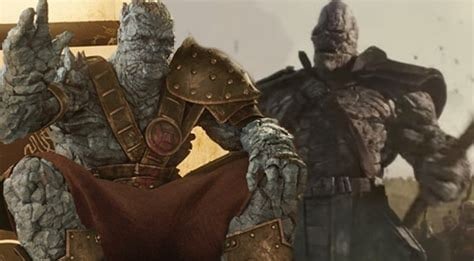 If the Kronan from Thor: Dark World is any indication, there are a few Avengers that might have the knockout power to take one of them down. But when you compare that specimen to Korg, who actually thinks and doesn’t just blunder into a battle thinking he’s going to dominate anyone, then you get the idea that Korg might be a little different. Also, it kind of depends on whether the Avengers, each taking their solo shot, would be able to one-shot Korg if they were standing toe to toe with him. Obviously Thor can do this, and if Thor can do it, then the Hulk can do it since their power base is up at a level where they’re both considered heavy hitters. Iron Man and War Machine might be able to wear Korg down, but again, we’re going to talk about face to face at this point, and this is where I do believe that Korg’s immense strength would come to bear and simply pummel the two suited-up Avengers mercilessly. Tony might have a chance simply because his suit is more adaptable and can take a good number of heavy hits, but Rhodes might suffer a bit worse since his suit is tough and can take a wallop, but with repeated blows he might end up looking like a dented can of tuna that’s been tossed on a floor by an irate toddler after a while. Spider-Man might be able to get in a few good licks, but even with his adaptable armor he’s not indestructible, and it’s possible that Korg would flatten him eventually.

Hawkey, Black Widow, Captain America, Falcon, and Winter Soldier would all get stomped in a head to head bout without calling on their other strengths. Sadly, Black Widow, Cap, Falcon, and Bucky probably wouldn’t be able to do much since when it comes to someone like Korg they just don’t have the knockdown power, no matter how hard they hit. Hawkeye might have a couple of arrows in his arsenal that, if placed just right, might be able to hurt Korg, but like the others he would need to keep his distance and not get squashed. Spider-Man fighting from a distance might be able to tie Korg up in his webs for a bit, but he still doesn’t have the knockout power and would need to improvise, while Black Panther would likely be at a loss. Iron Man and War Machine could possibly wear Korg down from a distance as they have an amazing array of weaponry between them, and could possibly take Korg down if they kept hammering on him from afar. If we’re bringing Doctor Strange into this matter he could easily subdue Korg since all he would have to do is open a portal and send the Kronan to another dimension or another location and call it a day. To be fair, out of every one of those seen in the Avengers he would have the best chance of ending the conflict without any real use of violence.

Barring that though, Hulk and Thor would be those that would have the easiest time in a one on one battle with an angry Korg since they’re the closest to his power level, and it’s already been proven that Thor can one shot a Kronan that thinks he’s insanely tough. The Hulk would probably be able to one shot Korg if he really got angry, but thinking that Ant Man would have that much luck is kind of silly since the best he could do is to get small and try to find a chink in Korg’s natural defenses that he could exploit. Apart from that, his role as Giant Man wouldn’t do it since his strength doesn’t increase when he grows apparently. Korg could still tee off on Scott without much trouble, and as for the rest of the Avengers that aren’t Doctor Strange or the Hulk or Thor, it’s easy to think that Korg would run riot over several of them. Captain Marvel could beat him, lest we forget, since her blitz attack allowed her to blow through Thanos’ ship pretty easily, which means that she could likely on shot Korg if she had the need. The great part about all of this however is that Korg is a pretty easygoing individual and doesn’t appear to walk around angry all the time, which makes him a very easy character to like since he’s usually just there to hang out and be a part of the group. But there’s no doubt that when it’s time to fight he’s down for it and he’s ready to dish out some major damage. As far as being able to take on the Avengers, there are plenty of tricks that a lot of them know, but when it comes to Korg only a few of them would have a chance.