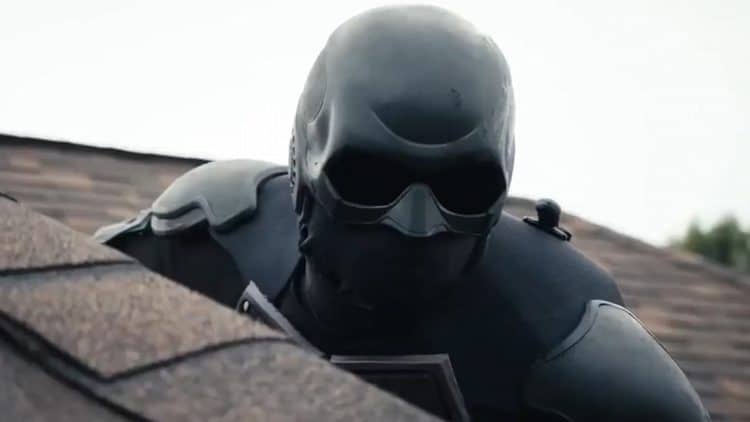 The Seven is based on The Justice League of America. Black Noir is based on Batman. They both wear black, they’re both basically ninjas, and they’re both usually quiet. The difference between them is that Batman will actually, well… talk when he has to. Oh, and Batman (most of the time) doesn’t brutally kill people. Those are just among the few differences between them, but in terms of how they serve their teams, Batman is far more active. Yes, he’s often considered a loner, but he’s arguably the most vital member of the Justice League.

If you’re a fan of The Boys television show, you might say that Black Noir isn’t quite so vital to the Seven. He often works alone and does his own black ops missions and when he is around other people, he just makes them feel very uncomfortable. That’s mostly because he just stands there and doesn’t talk. Actually, he never talks. Ever wonder why? If you read the comic, you already know the answer. I’ll be honest, I read the comic after I watched season one. I was very curious as to why Black Noir didn’t speak, but I just thought he was the badass ninja-like member of the group. It turns out, there was a very good reason why he was the speechless guy and the answer was just… messed up.

The twist has the impact of all impacts on the comic series and we fans are predicting the show will go a similar route. It’s precisely why I believe Black Noir is actually the most important character on The Boys. Here’s a little forewarning: I’m diving into some deep spoiler territory here. If you didn’t read the comics and just watch the show, you might want to turn away. If you read the comics, you already know where I’m going with this. Then again, the show likes to do things a bit differently, so you just might be in for quite the surprise. Basically, I’m going into full theory mode here, but come on, when is that not fun? If you’re a fan of the show and the comic, stick around and listen. You might hear the unexpected.

First of all, let’s kick it off with the big question. Why is Black Noir always in costume and never speaks? Well, the answer is simple: he’s not allowed to. It’s not because he’s a ninja-like superhero, but because he’s a clone. Guess who he’s a clone of? The one and only Homelander. Man, that explains a lot, doesn’t it? If you’re wondering why Vought would make a clone of Homelander and dress him all in black, it’s because he’s basically their contingency plan. Homelander is unpredictable and doesn’t like to listen to authority, so his clone sticks around just in case he decides to go rogue. If Vought wants him dead, they say the word and the clone/Black Noir, will kill him. Just when you thought Vought couldn’t get any shadier, huh?

Well, the clone was constantly around his target and not allowed to do the one thing he was created to do. This made him increasingly unstable and he eventually snapped. Instead of killing Homelander, he went on a killing spree without the mask. This led people to believe that Homelander did these things, including Homelander himself. Of course, this drove Homelander over the edge and once he discovered the truth behind Black Noir’s identity, he completely lost it. Needless to say, their stories didn’t end well.

It was a good twist for the comics, but I think the show is going to play with it a lot more. So far, we’ve seen Black Noir only being awkward and killing super terrorist. He hasn’t said a peep yet, but we got a small glimpse of his face during his fight with Starlight. When Queen Maeve lifted up the lower part of his mask and fed him the almond joy, we saw his nose, jaw, and mouth. The thing is, his skin was dark. Like, very dark. Keep in mind, he did get half his face badly burned in the first episode, and those wounds do show. However, even without the burn wounds, his skin tone is dark. Way too dark to match Homelander’s. That can only mean one thing: Black Noir is not a clone of Homelander.

That’s hard to answer, but the Heavy Spoilers channel on YouTube gave the best explanations. The channel points out how Black Noir was most loyal to Stan Edgar. Stan Edgar seems to be the guy with the plan, so who wouldn’t be surprised if he wasn’t up to something with Black Noir? Edgar sent him to kill Bill Butcher and he was willing to carry out the order without question. When Edgar called him off, Black Noir instantly obliged and retreated. He’s basically Edgar’s personal hitman, but where does this loyalty come from? I think it’s a lot more than just Black Noir simply doing what he’s told. Heavy Spoilers goes even further.

If Black Noir really is a clone, he’s Stan Edgar’s clone. That could explain his dark skin tone, but it’s very possible he could be something else. Black Noir can very well be Stan Edgar’s clone, but he could also be his son. That could be the best reason as to why he’s always at Edgar’s beck and call. We have yet to have seen Edgar show any real affection towards him, but then again, Edgar doesn’t seem like the loving-parent type. I reckon Edgar wouldn’t mind using his son as a test subject for Compound V. The perfect test subject who can answer to Edgar and Edgar alone.

His exact purpose can very well be to kill Homelander in case he goes rogue; Edgar is the only guy who is completely fearless when Homelander confronts him. It’s probably because if Homelander decides to try anything, Edgar calls on Black Noir and Homelander is history. Basically, he’s still a fail-safe, but he’s Edgar’s fail-safe. If he is truly Edgar’s son, then I hope they dive further into that and explain why Edgar felt the need to turn his son into a supe. Maybe that’s why Black Noir was crying when he discovered the truth about Compound V. Did his dad lie to him? These are some interesting questions that we really need answers to.

Think about it this way. Season 2 of The Boys emphasized a lot on the relationship between fathers and sons. I don’t think it will end with Homelander and his son, or Butcher and his father. I believe the theory that Black Noir being Edgar’s son is plausible and if it’s true, then it would be a pretty cool twist. Almost every deviation from the comics has worked well for the show, so in my opinion, they shouldn’t stop now. Be unpredictable and throw us a curveball.

What are your thoughts on Black Noir’s identity? Can’t wait for season 3!