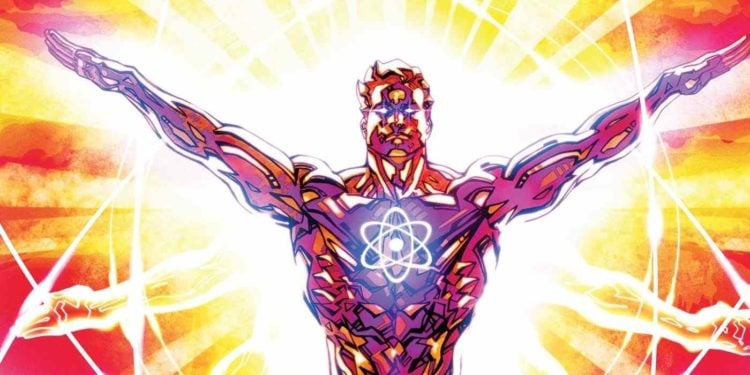 If I can point out a certain DC superhero that stands out mainly for his looks, it would have to be the very underrated Captain Atom. I remember the first time I saw this unique comic book hero was way back in the mid 2000s in the Superman/Batman series. He wasn’t exactly on the right side, although he thought so from his perspective. Back when Superman and Batman became public enemies, President Lex Luthor (yes, he became the president at one point), ordered them to be hunted down and brought in. Of course, very many supervillains were willing to take a paycheck from Lex Luthor. However, there were a handful of heroes willing to work for the government, despite Luthor being the president. The leader of that small group of heroes was Nathaniel Christopher Adam, aka Captain Atom.

That was the first comic I read where he was a major supporting character, tasked with bringing in Superman and Batman. Why did he choose to work for Lex Luthor? Well, it’s not because he was a traitor, far from it. In fact, there’s a reason why he’s called Captain Atom. Much like Captain America, the much bluer Captain Atom comes from a military background. He might not be a super soldier who fought in World War II, but his story is still very intriguing. On top of that, it’s actually more tragic.

First of all, I do very much believe that this character is underrated and deserves his own movie or solo series. Why? Well, I’ll just start with the obvious and point out that he looks so freaking awesome. There are many comic book heroes that just look cool, but Captain Atom stands out like a Christmas tree among plants. Just Google the character and take a look at a single image of him. About ninety percent of his body is a shining blue, while his hands and feet are a bright red. He also has a red atomic symbol on his chest, hence the name. Oh, and it just so happens to be the source of his awesome powers.

Yes, Captain Atom is basically a walking nuclear weapon. That sounds like a dangerous character on paper, but you know what? He very much is. However, underneath that living atom bomb is a man who believes in duty and will fight injustice when he sees it. Sounds a lot like Captain America, but in terms of their powers, there’s no contest. Our boy Steve Rogers is one of the gold standard idols of superheroes, but he’s certainly no powerhouse. That’s okay, because it’s all about the heart, right? Well, that’s why we have Superman.

Speaking of Supes, how many other comic book heroes can go toe-to-toe with him? Captain Atom is one of those heroes and if you don’t believe me, go watch their epic fight scene from the Justice League Unlimited cartoon. Boy, I really do miss that cartoon. If that doesn’t sell you on how seriously you should take Captain Atom, just look at him and think about another particularly shiny blue DC character. Does Watchmen come to mind? It certainly should, and there’s a reason why he looks a lot like Doctor Manhattan. From his looks, to his atomic-based powers, Captain Atom served as a major inspiration for Doctor Manhattan. Of course, Doctor Manhattan is probably the more powerful one, but at least Captain Atom doesn’t walk around naked.

I’m not just going to talk about how awesome the character looks. Sure, that’s a big element, but I believe a movie or solo series can explore his backstory. And of course, try to make it less corny that his last name is synonymous with atom. But hey, early DC days. They thrived in the corniest of corn fields.

As for his backstory, I think diving into his military background is essential to developing his character. Why was he fighting Superman in Justice League Unlimited? When General Wade Eiling reminded him that he swore an oath to the American government, Captain Atom felt coerced into becoming a registered superhero for the government. He did exactly that (for one episode) and duked it out with Superman. He lost the fight, but he sure did give Supes a run for his money. Part of Captain Atom’s powers is manipulating red sun radiation, one of Superman’s few weaknesses. That alone makes him a heavy-hitter, but that barely scratches the surface of what he’s capable of.

Before he became Captain Atom, Nathaniel Adam was an officer in the United States Air Force. After being accused of a crime he didn’t commit, General Wade Eiling blackmails Adam into becoming a test subject for a military experiment known as “The Captain Atom Project”. As a result of the project, Adam became the nuclear being called Captain Atom and disappeared for eighteen years. Upon his return, he discovered that Wade Eiling married his widow and served as the father for his two children. Eiling used this to his advantage by coercing Captain Atom into working for the government.

This is where I think a movie or a show for the character can be very interesting. The idea of a superhero working for the government can give us a rare and probably very complicated perspective from the character. Yes, he is a soldier at heart and he believes in following orders and serving his country. On the other hand, if he truly believes in fighting for a good cause, then he’ll choose to do what’s right. Sounds a lot like another captain, doesn’t it? If his government does something shady, like create another nuclear-powered being like him, but lacks a conscience, then he will do what’s right.

If there’s going to be a Captain Atom movie or series, he does have villains to fight. For instance, the one I just referenced is a psychopath known as Major Force. His powers can rival Captain Atom’s and be his physical challenge, while General Wade Eiling can serve as a main antagonist pulling the strings.

That’s the story, but even exploring his powers is interesting enough. His blue appearance is a metallic shell called Dilustel Armor. This comes from pieces of an alien body that was used in the Captain Atom project. It’s essentially his skin, but it also serves as a primary source of his powers, since it allows him to manipulate the Quantum Field. That’s only a fraction of his powers, so a series can allow to fully dive into what he can do. Plus, just seeing him in live-action form would be awesome to see.