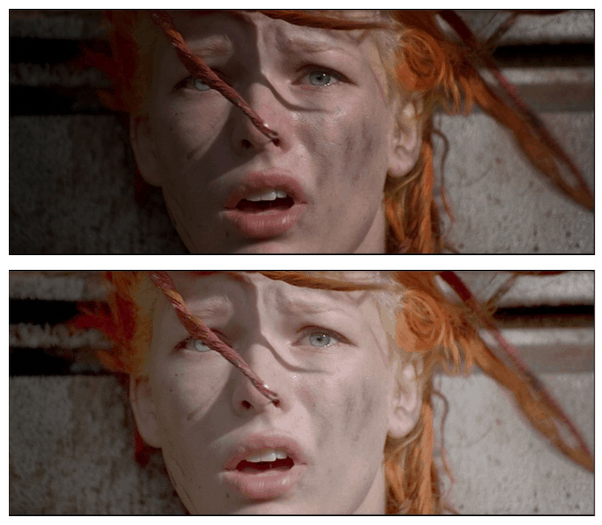 Without going into the technicalities the big difference between the theater and a home movie system has a lot to do with the color and lighting that is available for the big screen and is quite a bit different on home TV’s. So to be realistic it has nothing to do with thinking that you bought a defective TV, but it has a lot to do with how you play around with the settings so that you can get as much of a movie feel as you want. In another sense theaters have engineers that work on the picture quality and are trained to detect any issues and fix them either on the spot or before the picture is set to roll. Like it or not, unless you’ve received the same training you might not know what to look for or how to fix it if you notice it. There’s a world of difference between a high-tech projector and your home TV system, no matter how much money one might spend. If one does have that kind of money it’s hard to say whether or not they’d be able to purchase the kind of equipment they’d need for an in-home theater since the cost for a cinema projector can be up around $30 to $40 thousand dollars, which suffice to say isn’t possible for the average household. A flat screen TV that costs $1 thousand or more is far more effective but it will be necessary to tweak the settings a bit in order to make the effects pop as much as one might desire.

Then the setting has to come into play since theaters are specifically designed to keep your attention forward and offer the right type of lighting that will make the picture stand out and keep your eyes on the action. At home this is virtually impossible unless one can afford the aforementioned in-home theater would require thousands more to build since it’s not just the lighting, the seating, or the projector, it’s also the soundproofing that goes into the walls and the overall design that’s required for all this to come together. While it can cost as low as $5 thousand dollars an in-home theater can soar in price depending on the design and materials used. In other words it’s all a matter of what a person wants when it comes to designing a theater, and what kind of viewpoint a person prefers since as you might have noticed in a regular theater some people prefer to sit in the back at an elevated position while others might prefer being closer to the front where the screen looms over them. In a home theater this is really only possible if one builds the actual setup, as a typical home isn’t built this way and would require a great deal of work to make it operate in such a manner.

Some people have no problems spending thousands of dollars on their home system in order to give them the absolute best experience, but there’s a good chance that a lot of home systems won’t be able to compete with the theater in terms of graphics since movie theaters are built specifically to give audiences the kind of experience that keeps bringing them back. A lot of theater owners are likely hoping that they’ll be able to open their doors soon since the rumor is that a lot of theaters will be opening eventually. So far it’s hard to believe that some of them are still in business, though we’ll have to wait and see just how many really start to make back the money they’ve lost and how many will be able to hang on with a chunk of the summer revenue already being lost. To be fair it would be nice to get back into the theater and experience the big screen again, but it’s not so vital to our existence that it’s worth risking our health. Some people might argue with that no doubt, but the reality of it is that the COVID-19 virus isn’t gone yet and it’s still a concern, but much less of one apparently since people have been out and about despite the continue warnings. Theaters will be opening no doubt, but with much stricter guidelines when it comes the audience members and likely at half capacity for some time to come.

When talking about the quality of picture however just keep in mind that theaters shell out a lot of money for the projectors they use, and typically have someone on hand, or can call someone, that knows what they’re doing when it comes to adjusting the picture. Unless you’re one of those people that has this kind of training then it’s likely that you’ll have to play with the settings on your TV for a while to get it right.