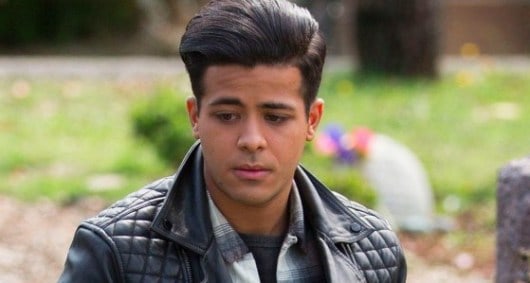 B. Alan Orange from MovieWeb seems to be confident or at least speculative in thinking that Christian Navarro from 13 Reasons Why might be a good fit for the upcoming live-action Little Mermaid movie. Since Harry Styles passed on the role it would seem that Navarro was and is being considered for the role since he’s put his hat in the ring so to speak and has begun the process of letting Disney know that he’s more than a little interested. He did make it know that he’s ready to ‘make history’ as if he did get the job as Prince Eric he would be a Latino prince joining a black mermaid, and you can imagine the small but troubling media storm this might bring up, or not, since the appointment of Halle Bailey as Ariel already drew the ire of many a fan of the animated movie that expected a white actress to take the role. All I can say is that thankfully Lindsay Lohan didn’t get the role when she expressed interest in it.

But the idea of having a Latino prince shouldn’t be that big of a deal really since Christian does have the right look to be a Disney prince since he is a good-looking guy and as he already said, he can sing as well. The movie would be making history regardless of the trolls since having a black mermaid is already stirring up a lot of inspiration that’s seeking to drown out the doubters and the haters and thus having a Latino prince would be just another bit of diversity that might make things even more interesting. It’s been rumored that Javier Bardem is up for the role of King Triton, even though Terry Crews initially pushed to be cast in the role. Nothing is finalized yet and as you can imagine a lot of people are waiting anxiously to see just what’s going to happen and who is going to be put in which position when it finally comes down to it. Those that are pushing for a white cast have only one good point when it comes to any argument they might make, the animated movie DID have a primarily white cast and it seems as though this might have been due to the geographical region the story took place in. That does kind of seem odd though that Sebastian would have a Jamaican accent while the rest of the cast spoke English without an accent other than the French chef and the English butler/adviser. Bailee Abell of Inside the Magic managed to showcase a few tweets, both those that are supportive and those that are quite negative, that came as a response to Bailey’s casting.

Apart from that the live-action movie should be fully capable of taking on anyone of color, though it would be crossing the line at this point to make anyone gay or transgender. Let’s face it, the original legend wasn’t quite THAT inclusive since it was conceived in a time when such things were still considered to be highly irregular. The fact is that Disney doesn’t seem ready to make its classic movies quite that controversial, which is what it would be seen as, and while they might be in the process of doing such a thing, The Little Mermaid won’t be part of that movement. The mere fact that Ariel being black drew such heated comments was enough to indicate that, unfortunately, a lot of people still want to stick to the old story lines. There’s nothing wrong with that to be honest since a lot of people of all colors and races enjoyed The Little Mermaid animated movie. It wasn’t horribly inclusive as far as race went, but it was still a classic tale that managed to captivate a lot of people and is something that inspires a great many people as well.

Sarah Halle Corey of Elite Daily reminds us that Christian isn’t the only one up for the role, he’s just one of the newest names to enter the ring for the privilege of being the next Prince Eric. While there’s likely a number of people that would love to see this happen there’s still no official word on what will be the final decision as to who is going to round out the cast. All that’s known at this point is that no matter what happens there’s going to be dissent and there will likely be voices that will be raised in support and denial of what’s going to happen in The Little Mermaid since the casting has, for one reason or another, become the main issue of this movie and a real sticking point with some people when it comes to whether or not they plan to enjoy it. It’s a wonder that it can’t just be a cute kids’ movie.