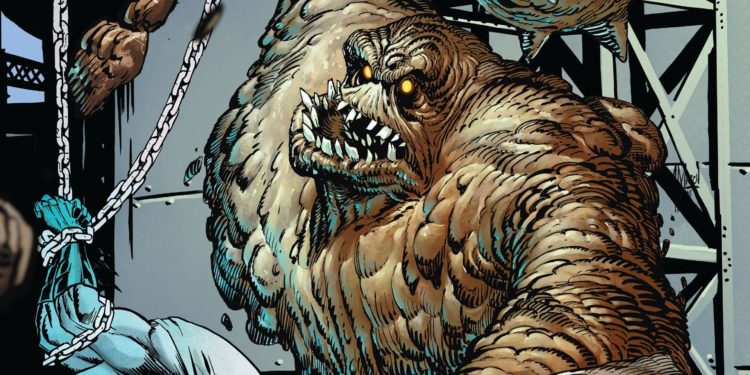 One of the most underrated Batman villains ever is Clayface. If you’re a Batman fan, how many times have you seen him outside the comics? I’m talking about every Batman movie, cartoon, television show, and video game that you’ve come across. By my count, he’s appeared in several shows and video games and zero live-action movies. That’s disappointing. Whenever he did appear in a show or a video game, he was never a major part of it. Granted, he’s never been the “main antagonist” type of villain, but as a physical threat, he’s highly formidable. That’s precisely why Batman has struggled against him and that’s why he needs to fight him in the next live-action movie. Let’s dive in to the villain of Clayface even further, because I think you will all see my point.

When I say “the next live-action movie”, I don’t mean Matt Reeves’ The Batman. That’s mostly because I view The Batman as a more realistic and less comic-booky take on Batman and I’m not sure yet if Clayface exactly fits in that type of world. Comic book fans can look at Batman: Earth One and see the more gritty vibe it gives. Gamers can look back at the Batman Telltale series and remember how that also had a gritty vibe, but Batman still faced villains with powers. I’d have to see the actual movie (now delayed until 2022) first to decide if Clayface can work, but for now, I have a different Batman in mind.

The best Batman to take on a villain like Clayface is Ben Affleck’s Batman. Keep in mind that Batfleck took on the greatest hero of DC and won. The thing about Clayface is that he’s a Batman villain that other DC heroes like Superman or Green Lantern can defeat with ease, but Batman always had trouble with him. For an aging version of Batman, Batfleck would certainly struggle against Clayface more than the other villains he’s come across. I imagine the two of them fighting would burn him out physically, similar to how a fight with Bane would go.

However, there is a critical difference between Clayface and the other Batman villains: he can’t be hurt physically. You can’t punch him, even with super strength. You can’t throw a building on him. Heck, you can do pretty much anything to him and it won’t hurt him. He’s virtually invulnerable to physical harm because he’s literally made out of mud. Technically, it’s more like some kind of magic protoplasm, but you know, that’s all comic stuff. This is one DC villain who just doesn’t get the kind of attention he deserves and it’s a Batman villain that he doesn’t fight enough.

So what else can he do? His primary superpower is shapeshifting. When he’s not a giant mud monster, he’s taking forms of anyone or anything he wants. When he does reveal his true form, he makes a show of it, instilling fear in his victims by showing how horrific he can make himself look. If he wants to kill you, he’ll literally engulf you in his own body. Basically, you’ll drown in his mud-like substance and he’ll spit you out. He’s done this before to Batman but he survived by just holding his breath… for over an hour. Hey man, he’s Batman.

I’d rather not have their fight play out like that, but just having Clayface debut in a Batman movie can make for an awesome story. Given his shapeshifting abilities, he can really turn a Batman movie into a horror movie. Think of it as The Thing invades DC and ends up in Gotham City. Batman will have to rely on his detective skills and his physicality to keep up with Clayface. However, the most valuable weapons he has in his fight against Clayface would be his gadgets. If he can’t knock him out, he’s got truck loads of gadgets to incapacitate him in all kinds of ways.

Speaking of which, does the final boss fight in Arkham City ring any bells? It should, because that was one of his most significant moments ever. As the last boss fight, he gave one heck of a battle that made players think on their toes. All the things he can do, including forming his limbs into bladed weapons, to turning into a giant wrecking ball, to creating multiple, smaller fighters from himself challenged Batman to the extreme. The only way you could do any kind of damage to him was by using the freeze grenade. Even after he thawed out, he was still very much fighting on. Not even Bane or Joker would be able to come back from that.

That’s the kind of fight I want to see in a live-action movie. It’s the kind of fight Batfleck can deliver, especially since he’s got the gadgets. Out of all the Batmans, Batfleck is the one that puts the “hero” in superhero. The live-action Batmans always fell short when it came to using their gadgets, except when it came to the Bat credit card. Anyway, I think the gadgets were never fully utilized to their fullest extent in the movies until Batfleck came around. They are a part of Batman’s character and they’re the closest thing to a superpower that he’s got. If he’s gearing up for a fight against Clayface, he’s going to need them.

That’s really where a movie with Clayface can get interesting. The freeze grenade from Arkham City can only temporarily incapacitate him. They ultimately helped Batman defeat him in the end, but we know he’s still around. If he’s incinerated, frozen, or blown up, a small drop of him always survives. That small drop could easily grow back to the monstrous Clayface and come back to fight Batman. Batman just can’t get rid of this villain, but the best he can do is incapacitate him. The challenge for him is to concoct a gadget that will actually allow him to fight him. This will push Batman’s intelligence, while being extra cautious about who to trust. Clayface can torment him with his shapeshifting and even push the boundaries of his sanity. Any villain who can challenge Batman physically and mentally is worthy of fighting him in a movie in my book.

Let’s also keep in mind that there are multiple versions of Clayface. The most popular one and the original is Basil Karlo. The most interesting thing about him is that he was the last Clayface to actually obtain the powers of Clayface. He’s the most cunning, the most diabolical, and the most powerful. Heck, why stop at him? DC is a massive universe, so they can easily fit in Matt Hagen, the treasure hunter who was the first to obtain the powers of Clayface. By including him, they can easily add in the other Clayfaces who followed in his footsteps. If it’s Preston Payne or Sondra Fuller or Peter Malley, they’re all different, which means they would all pose a different kind of challenge to Batman. If they just want to add in Clayface to fight Batman, I’d go with Basil Karlo and make it like Arkham City.

What are your thoughts, Batman fans?