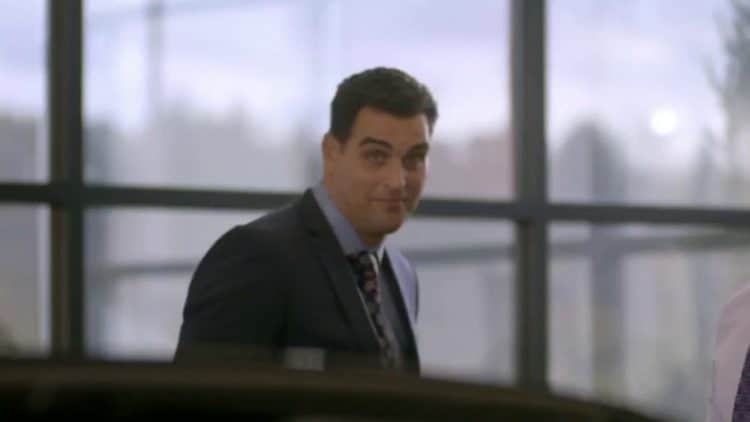 The idea of who’s the villain in Cobra Kai has been pretty well established in the second season of Cobra Kai, but while you can fault John Kreese for being kind of a garbage human being that knows how to manipulate people, it’s hard to say that he’s not to be respected in some way since it was still kind of slick in how he took back his idea. Johnny isn’t the villain, at least not entirely since he’s currently on a redemption arc, and even Daniel isn’t the villain, even though in season 1 he acted like an insecure jerk when he saw that Cobra Kai was making a comeback. Nope, the worst villain of them all at this time is cousin Louie, who gets the vote as the worst villain in two ways. The first is that he assumes that by going after Johnny he’s doing his cousin, Daniel, a favor. He actually hires a bunch of out of town bikers to torch Johnny’s car, which of course backfires since Johnny thought it was Daniel that did this. The second is that he’s just an idiot, point-blank, and without any redeeming qualities. Louie is the part of the family that everyone else shies away from and says “I don’t know this guy” whenever he opens his mouth. He’s that cousin that will stand up for his family member but will do it in a way that only makes things worse since he doesn’t think before acts.

Thankfully it doesn’t really feel that cousin Louie will be around any longer since he did get canned from the dealership, but it’s always possible he could be brought back since the show has been full of surprises thus far. Of course, if there’s really a villain to be brought back a lot of people are hoping to see Terry Silver, the rich and very manipulative friend of John Kreese, from Karate Kid 3. If there’s any chance to keep Louie as a villain then perhaps there’s a way to do so in season 3 or perhaps another season if things keep going. He’s definitely the kind of guy that would be susceptible to someone like Silver, who already showed the world just how cruel he could be when he gained Daniel’s trust and nearly turned him against his mentor. But Louie wouldn’t stand a chance against Silver since the resentment he has towards his cousin, which is likely, and the desire to get back in the good graces of the family would likely be triggers that Silver would lock on and use more than a few times to make certain that Daniel was made to pay for besting Silver’s chosen bully, Mike Barnes, so many years ago. Hey, Cobra Kai is all about grudges and redemption arcs, so there’s no telling if Mike Barnes might make his way back to the fold or not, especially since it sounds as though Chozen from Karate Kid 2 is coming back. But who’s going to be the villain and who’s going to be the hero is still a very muddied concept since there are no clear lines on who’s in the right and who’s in the wrong at this point, though they’re starting to clear up. Kreese is by far the bad guy that has to be dealt with at this point, but Kreese is also like a hammer, he can be subtle, but it’s not his strong point. Silver is like the knife one hears in assassination movies before it strikes, always ready and always deadly. Louie on the other hand is the distraction that the knife-wielder will toss out into the center ring to get everyone’s attention before going to work.

If Louie is brought back then it can only mean that someone else is going to be goading him on, or that he’ll be attempting to crawl back to the dealership in an effort to get his job back and gain some favor with his cousin again. It’s all good to forgive family and such, but to bring Louie back would kind of sully Daniel’s already slightly tarnished reputation in the show, so forgiveness is okay, but if the writers put him back on the payroll for the dealership and as a part of the show again it would probably mean that they don’t really see Daniel as a heroic character in any sense. But of course, this is a lot of conjecture and if Louie comes back at all it could be for some sort of comic relief. After all, that’s about all the character is good for since otherwise he doesn’t add a lot to the story and is mostly there to be kind of a goofball, almost like Johnny’s friends were back in the day. The only difference really is that Johnny’s friends could actually fight when they needed to.