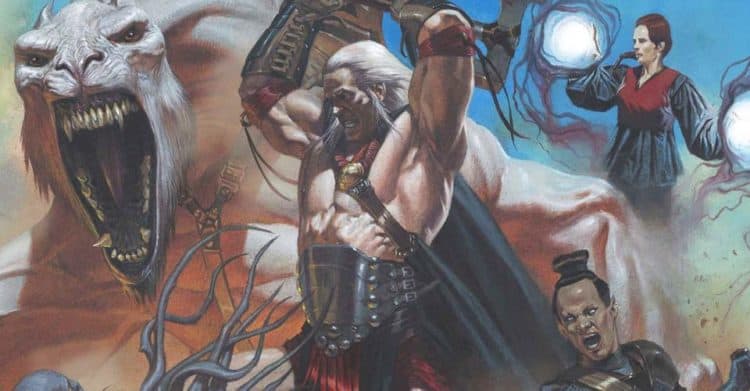 It would be impressive to see just how many people really know that much about The Last God when it comes to DC since it sounds fair to say that a lot of people might know nothing about it. But just reading the synopsis it does sound familiar, though it also sounds like something that could be used to help keep DC on top when it comes to TV since the story is one that might have been told in a number of ways, it’s also one that could be told again from a different vantage point and still be popular. In essence, a group of heroes has to stop a rampaging god, the last one of their number, from destroying their world with a legion of undead. They succeed and end up becoming the rulers of their world, but as one might guess, the last god isn’t really dead and thirty years later returns with the same threat to their world. Three decades finds the aging heroes unable to defend the realm as they once did and having to explain why the last god wasn’t really dead, and the particulars of the story that made them the rulers of their world. In effect, it brings forth the lie that allowed them to gain power and the reality that they have to face as a result.

As a series, this would be kind of interesting since the whole idea of gaining influence through deception and lies is something that one can’t help but get into since the intrigue is enough to involve a lot of people that are drawn to this kind of topic. It could also be a nice change of pace from the shows that are set in the modern era in a world that is basically the same as those viewing the show. There is a level of comfort that comes from watching shows and movies that are based in the real world or something like it, but every now and again it’s a fun and exciting thrill to see something that’s set in a world that’s supposed to be far different than our own and might even have different rules when it comes various natural laws. The story itself, set apart by thirty years in between, could be interesting, providing that it does something a little different than has been done in the past. If anyone knows what I’m talking about, we’ve seen plenty of TV shows that have elevated certain figures based on a lie, hell, we’ve seen that happen in history in the real world more than once, but there are various ways that this can be done, be it through good intentions or by selective memory.

Unless things are going to change in a profound manner it’s easy to think that the story will keep to the comics that the story will be derived from, meaning that there’s a reason for everything that happens and a secret for everything that people might think is true. The kind of deception that allows someone to become a ruler isn’t anything new, but there are plenty of ways to go about it that can be used to excite and thrill the fans in a way that will make them far more appreciative of the story than if it’s just a simple ‘this happened because of this and people believed it’ kind of story. Sticking to the comics might be the only way to really make the fans happy, but there’s usually some wiggle room at least to create a story that’s going to be bought by the people and can help to boost the ratings in a way that will help the show and the network that is attempting to push it. DC has already been doing great in the ratings with its various shows, so it’s fair to say that this one might actually do the same if it was presented in a way that represented the original story and was given the kind of treatment that actually makes the fans happy. Too often it’s seen that directors want to do things their way without much if any, real compromise, and often it’s seen that this backfires since many fans raise a stink about the idea that the source material wasn’t followed or even considered.

But we’re going to have to wait and see just how things go since if there are talks of making this happen they haven’t been made public just yet and it’s easy to think that not a lot of people know that much about it. There’s no doubt that it sounds like an idea that could possibly stick and even be seen in development if someone had the gumption to make it so, but until then we’ll have to keep wondering what might happen.