Home
TV News
Why Did Daniel LaRusso Spoil his Son But Teach his Daughter Karate? 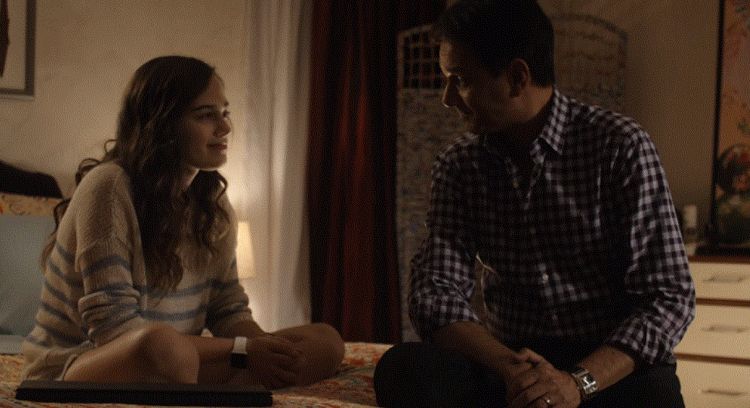 It’s been made pretty clear now through three seasons of Cobra Kai that the LaRusso children are very different since Samantha has taken up her father’s idea of self-defense while her brother Anthony has not. But some folks are wondering just why Daniel would teach his daughter and not his son, as Miyagi-Do did pass from father to son initially. The answer is pretty simple though, it’s not that Daniel didn’t want to teach Anthony karate, it’s that Anthony didn’t want to learn. There’s no denying that Daniel and Amanda have both spoiled their kids in a lot of ways, but Sam was the one that took to the training while Anthony didn’t. Their age could have something to do with it as well since Sam can remember Mr. Miyagi while it’s fair to say that Anthony does not, and that can make a big difference as well. If you’ve seen the third season already then you’ll know that Sam had a connection with Daniel’s mentor and from the letters that Yukie read to Daniel while he was in Okinawa, Mr. Miyagi stated that Sam made him feel like a grandfather in the best of ways. That would be one reason why she finally found the motivation when Tory and the other Cobra Kai’s decided to attack Daniel and Johnny’s students at Daniel’s home. Tory had just shattered the picture of Mr. Miyagi, one of the men that Sam looked up to the most, and it’s fair to say that she was a little pissed, but not so much that she was out of control since she started rocking Tory back with a great amount of ease.

But getting back to the question of why Anthony didn’t receive any further training, it’s largely because he didn’t want to do the work. Daniel did try to include him early on in the show, but it was seen that Anthony didn’t want to participate and as a result, he wasn’t given the same training. The fact is that Anthony didn’t want to do the work but he was impressed by the end result. Continuing to push in this manner probably wouldn’t be a good idea, but there’s always the chance that Anthony could come around at one point or another, and now that Amanda is on board with Daniel opening the dojo and accepting students thanks to her run-in with Kreese, things appear to be heading in a positive direction, even if the fight ahead is going to be even more vicious since it would appear that Kreese is calling in the reinforcements. One has to wonder if we’re going to see Terry Silver appear in the season to come and if even Mike Barnes might make an appearance at some point. Just imagine how that would go to have Daniel, Johnny, and Mike all in the same space at the same time. Then add Terry Silver and watch the fireworks fly. Where Anthony might fit into all of this might be the same spot he’s been to start with, since from the beginning he’s been more of a supporting character and hasn’t had a whole lot to do. It does feel as though the writers tried to work him into the story a bit more, but it didn’t go quite the way that anyone expected.

At this point in the story, he shows up now and again but isn’t considered to be that important. For those that are of the mind that he could just be getting held back in reserve until he’s really needed for something, this feels blindly optimistic since he does feel like the kid that has decided to go his own way and not be a part of the karate legacy that his father is trying to build. Anyone stating that Daniel hasn’t paid enough attention to Anthony would have a point, but at the same time, they would need to remember that Daniel did try, as he did make an attempt to bring Anthony into the fold, but was rebuffed in the way that almost all kids know how to do. But there’s no real need to think that Anthony will change his mind, even if it would be pretty cool if he did at this point. There are plenty of challenges coming up in the season to come since Robby has sided with Kreese, Hawk has made his way over to the united front that Daniel and Johnny have presented, and the battle lines have been drawn. The next season is bound to be epic since it’s easy to imagine that the All Valley Karate tournament is going to be even more important than it was in the past. Anthony LaRusso is either going to be a surprise that comes from nowhere, or just another supporting character when all is said and done.