Home
TV News
Why DuckTales Will Be Ending With Season 3 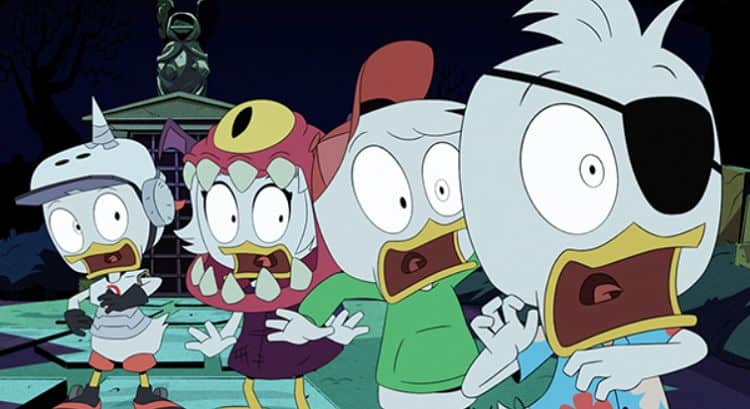 What’s more irritating than realizing that a favorite show is ending? It’s the fact that we’re being told that Ducktales is being ended after the third season is over, but not why. There are plenty of guesses to make since it could be money, it could be the lack of material, it could be anything, but since this is Disney we’re talking about and the fact is that their creative team should be able to keep the animated series moving forward without much trouble, it could possibly be that it’s just time for the show to end. The original cartoon that aired back in the 80s and would be brought back for reruns at some point was a popular show as well since was remembered fondly by quite a few fans that can remember plopping down in front of the TV to watch their favorite heroes of Duckburg as they embarked on their next adventure. It’s a hope that those who state that this new series is better than the original take into account that the story has been updated, and the basic formula is still there, but it definitely needed to be given a facelift to attract young viewers of today that aren’t bound to be as impressed as those of us that remember the original were. In other words, things were kept largely the same, but they had to be brought into the new era and given a slightly different look.

Maybe the ratings aren’t where Disney wants them to be, or perhaps there are other opportunities that the voice actors need to focus on. Who knows? All that’s evident is that Ducktales will be ending with the third season and it does sound as though it’s going to get a fitting sendoff in 2021. Fans might be sad to see it go, but the thought that it might come back again one day might sustain a few people. It’s not a guaranteed thing of course but it’s something to think about since very few people were thinking that the show might come back as it did, but look what happened. Even better, we got to meet the triplets’ mother and see more of Donald Duck, so there were definitely positives to be had with the new Ducktales beyond the return of Scrooge McDuck and so many others. It was even nice that Huey, Dewey, and Louie were given such different attitudes and looks to make them a little more distinguishable this time around since they’ve always been able to be identified by the color of their clothing, but that was about the only marked difference between them. This time around they were turned into their own specialized characters.

In fact, many of the changes were actually pretty well-received since Mrs. Beakley looking like an NFL linebacker was kind of interesting, and seeing the rest of the cast represented in a very different way was intriguing since it added to the story and created something that was miles above the original but had the original series to thank since it made this current version of Ducktales possible in the first place. To hear that it’s being dropped again is enough to make a person wonder if this is going to be a habit that Disney will be bringing back to the people eventually when they figure that the show has been allowed to die down after a while. It’s hard to say, but maybe it’s a strategy that Disney is contemplating, or not. It would be kind of a gamble since it feels as though people had to be coaxed into liking this show the way it currently is, even though plenty of folks came of their own volition and have come to grips with the idea that the show is going to be canceled.

One can only hope that Disney+ isn’t going to start taking its cues from Netflix, who is known to cancel shows after a while and give out the lamest reasons for doing so. It’s likely that’s not the case, it does kind of feel that way all the same since canceling shows has been the order of the day this year along with many other quirks that the streaming sites have been experiencing. There’s no doubt that Disney already has something lined up for the spot that Ducktales will be leaving behind, and will probably keep the show on the site for some time to come. But without any new episodes, it’s going to be kind of hard to let the show go since a lot of people were excited to see it. But without the added fanfare that probably doesn’t help the case of the show, it’s easy to think that it’s not worth keeping it around if people aren’t going to anticipate it like other shows.