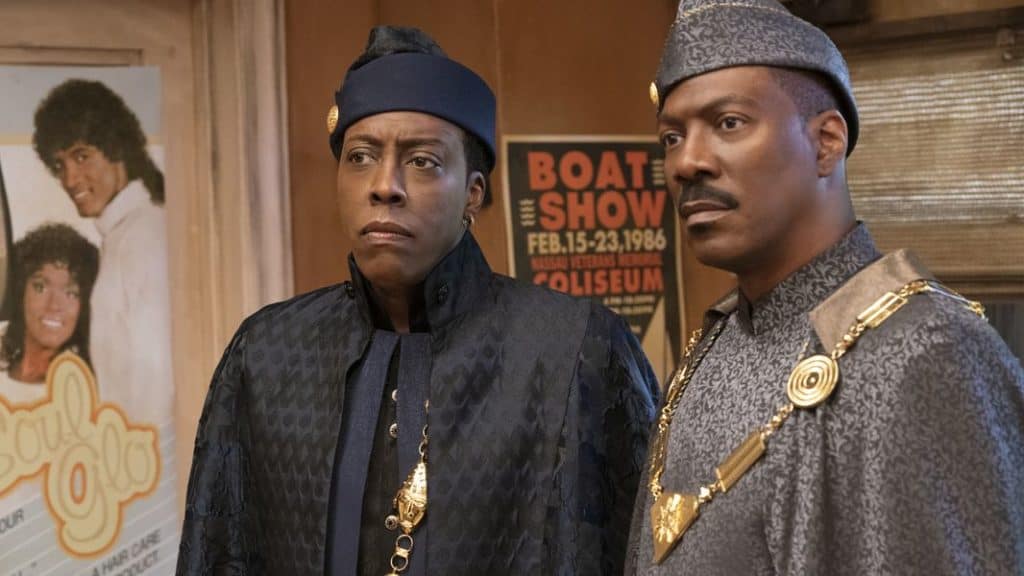 This is one of those times when even with a smile a person has to say “no, stop it, please” and keep smiling since it’s Eddie Murphy, a guy you can’t help but laugh with when he tells a funny joke. But the practice of continuing things that already have a great ending is something that really needs to stop since the second movie could have gone without being made. Not only did it introduce a few tropes that were less than ‘woke’ as some people might have noticed, but it just wasn’t as funny. The movie did try to make something happen given that it brought several new faces to the game and even gave Akeem an American son that had to grow accustomed to the ways of Zamunda, but despite not being the worst movie ever made it was still far from being as good as the original. Seriously, one has to wonder what Eddie Murphy is really thinking in even considering a third movie, especially since he wants to age for real this time instead of using makeup to age himself. That’s right, he wants to wait for a while until he’s older to get the experience right, but there’s a couple of things he appears to be forgetting, like whether the cast will be willing to come back when that time rolls around again.

It might be that he’s thinking that he’ll wait until the appropriate moment or it could be a joke, which is the best hope, but at this time it does feel as though Murphy might need some time to sit back and really think about what he’s trying to do. Another movie would be just as pointless as the second movie was, and if anyone wants to argue this point then there are a couple of good points to be made. For one, the first movie didn’t really need a sequel, largely because the story ended on a happy note, there weren’t any real controversies that would have been worth pursuing, and to be certain, people were happy with how it turned out. Even the second movie wrapped up nicely as Akeem’s son was allowed to wed who he wanted, General Izzi, played by Wesley Snipes, was turned into an ally instead of an enemy, and Akeem’s eldest daughter was set to assume the throne of Zamunda, thereby ushering in a matriarchy that should have made a lot of people happy. And yet, nothing. Perhaps not enough ‘woke’ individuals watched the movie, but the fact that a young woman was named as heir to her father’s throne should have had people swelling up just a bit. Oh well.

But a third movie isn’t really needed given that things are where they should be and after another decade or so one can easily imagine that a few of the cast members might be less than interested in returning for another sequel. It’s either that or the story will change in a way that will once again reveal a hidden surprise that will rock the kingdom. Asking what could possibly happen this time would be unwise since there’s always something that could come along and disrupt the country it would appear, especially another decade or so into the future. But the real question is, why bother? If anything, Coming 2 America was a decent sequel that wasn’t great but was enough fun that it helped to cap off a story that was already positive enough but apparently needed something else to make things work the way they should. Older actors attempting to one-up their own movies and continue something that they apparently didn’t feel was over and done with has been a trend for a while that is kind of growing tiresome since it would appear to indicate that those doing this don’t have anything left in the tank when it comes to new ideas. The story might change a bit here and there, but in doing this kind of thing it really doesn’t make a case for said actors having anything new to work with. A lot of people know and understand that Eddie Murphy is still a funny guy and can bust a joke and make people laugh at any given time, which is why this movie was a bit confusing.

But part 3 feels like it would be a big mistake. The second movie was easy enough to watch, but it was a step down, and it does feel as though a third movie would be the same way. Some folks might want to state that it would be just fine, that there’s plenty of material to work with and there’s no reason to think that a third movie would do anything but honor the original movie in a big way, but at this point, it feels as though people are just wanting things to continue for the heck of it, and not for the benefit of the story.