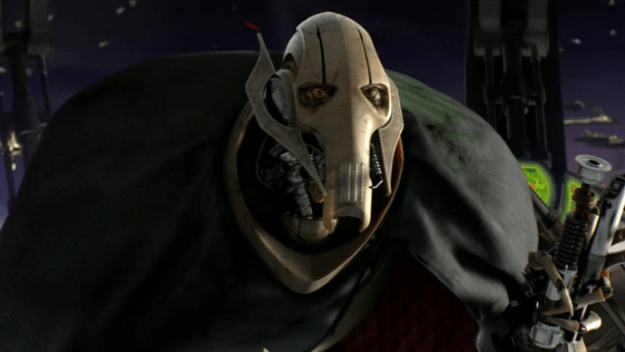 Out of all the characters from the Star Wars prequels, General Grievous was the most underutilized. He made his big movie debut in Revenge of the Sith, where he had a fairly minor role as a villain. The thing that made him stand out from other Star Wars villains was his lack of force sensitivity and his four arms. For each arm, he carried a lightsaber that he acquired from every Jedi he struck down, and as time went on, he accumulated quite the collection. Grievous is Supreme Commander of the CIS droid armies, Count Dooku’s strongest disciple, and a deadly Jedi hunter. His leadership abilities were shown in Revenge of the Sith, but the other elements were severely lacking. The lightsaber duel between him and Obi-Wan was short, like way too short. I liked the hand-to-hand exchange between them, but frankly, he deserved much better.

General Grievous is one of those underrated Star Wars characters that had the best character development outside of the movies. As a fan of the Star Wars novels and comic books, I can attest to how truly awesome of a character he truly is. Much of this was a part of the Legends continuity, which is unfortunately no longer canon. However, there are plenty of stories that are a part of the canon continuity that serve him rather well. One example of this is the Star Wars: Darth Maul- Son of Dathomir graphic novel. This is one of the pre-Disney stories to remain canon and was originally intended to serve as a script for the animated Clone Wars show. Once the show was cancelled, the script version never saw the light of day, but the story itself fortunately did.

Fans of the Clones Wars cartoon will remember Darth Maul returning due to the magic of Mother Talzin. She gave Maul a set of cybernetic legs and restored his sanity, giving him the opportunity to organize a vast criminal empire of his own. As mother and son, they declared war on both the Republic and the Confederacy, eventually attracting the attention of Maul’s former master, Darth Sidious. And who else to combat Darth Maul but his top droid general? Darth Maul and General Grievous had several duels throughout the duration of the Clone Wars, and there was never a decisive victor. Darth Maul was always awesome, so you need another awesome villain to go toe to toe with him.

General Grievous was that villain, especially since he slaughtered Mother Talzin’s Nightsisters in The Clone Wars series. What they didn’t show in the series, was him delivering the killing blow to Mother Talzin herself. Maul and Mother Talzin challenged Count Dooku, General Grievous, and even Darth Sidious, which ended in Maul witnessing Grievous stabbing Mother Talzin. He was dragged away screaming by his soldiers, and we wouldn’t see him again until his final appearance in the Rebels show. Grievous was a menace to not just the Jedi, but other Star Wars villain as well, even the strongest ones. Despite his humiliating defeat at the hands of Gungans in the Clone Wars series, Grievous was always a serious threat.

Speaking of The Clone Wars series, Grievous’ very first appearance was in the 2003 cartoon. As introductions go, it couldn’t have been better. Grievous ambushed and single-handedly took on six Jedi, including Masters, Ki-Adi-Mundi, Aayla Secura, and Shaak Ti. He made use of his cybernetic enhancements, which granted him incredible speed and durability. His mere ferocity aided him in his battles immensely, as he quickly gained the reputation of a feared Jedi hunter. The last episode of the series showed Mace Wind using the force to crush the chest plate protecting his heart and internal organs. The villain’s famous asthmatic cough was the result, which led directly to Revenge of the Sith.

Now I’m aware the events of that series are no longer canon, but let’s face it, it’s too cool to forget. Grievous’ introduction is one of the main reasons as to why, but his story technically didn’t begin there. I’ve established how cool he is, but that’s not exactly why he deserves his own movie. The best story to serve for his solo film would be his origin story. Before he became the cyborg killing machine called General Grievous, he was a Kaleesh warlord called Qymaen jai Sheelai. When the insect-like race called the Huk invaded his world, he led a brutal offensive against them. During the war, he met a female Kaleesh named Ronderu lij Kummar, who became very close with him. After she was killed by the Huk, Sheelai changed his name to Grievous and took the fight to the Huk home world.

An interesting origin so far, but guess who was responsible for his transformation? The answer is his master, Count Dooku, the man who taught him how to use lightsabers. Grievous’ body was almost nearly destroyed in a shuttle explosion, something that Dooku himself arranged. He later found himself in the care of San Hill, the Chairman of the Banking Clan. It was Hill who offered to reconstruct him as a cyborg and turn him into the ultimate killing machine. Though Grievous initially refused, he accepted with the hopes of using his new body for only one purpose: revenge. Dooku had his new weapon, Grievous acquired a new body, and the rest is history.

The most interesting thing about General Grievous is that he was meant to be an echo of how Anakin became Darth Vader. A Jedi hunting cyborg with a breathing problem that was manipulated into joining the dark side? The similarities between them are surprisingly close, which is why Grievous deserves to have his story told further. His origins even reveal why he despises the Jedi so much; when he invaded the Huk home world, the Republic and the Jedi helped push his forces back to their world. That proved disastrous for Grievous’ people and he swore vengeance against them. The Clone Wars show always showed his hatred for the Jedi, but never explained it. His origins show how awesome he is, as well as how complex his character really is. This is something Revenge of the Sith failed to do, and it’s something his solo movie can succeed in.

An underrated character with an unexpected tragic backstory can serve well for future Star Wars movies. A good way for it to end would be showing his first meeting with Count Dooku and emerging as the cyborg General Grievous for the first time. The more I talk about this, the more I want to see it happen. Maybe they can give George Lucas a call to do the coughing for him again. Only time will tell.