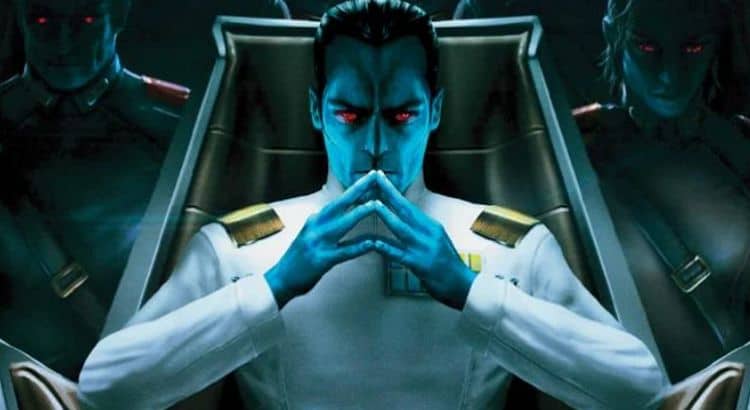 Casual Star Wars fans might not know enough about who Grand Admiral Thrawn is, or that Thrawn is a very shortened version of his real name, but those of us that have been following the story for so long can easily fill them in since the blue-skinned aliens known as the Chiss are and have been a part of Star Wars lore for many years now, admittedly part of the Legends canon where they were started. They were adopted for the animated series as well though, meaning that they’d become impressive enough to actually keep them around and continue to develop their story line. While the Chiss are absolutely scary in how they fight and how they view the rest of the galaxy the one among them that’s gained the most attention has done so since he’s been the go-between for the Chiss and the Galactic Empire in the past. Thrawn is one of the few individuals that’s been able to speak with Emperor Palpatine and work with Darth Vader and keep his composure around both, largely because his race is cold, calculating, and altogether dominant when dealing with others. The Chiss are a very demanding race within the Star Wars universe and are also quite standoffish when dealing with anyone other than their own species. Those that have read the recent Thrawn novels that have been released in the past year or so would be able to see that they simply don’t trust others as they are entirely self-sufficient and very secretive.

Thrawn is a bit different as he’s been depicted as a man that has seen the value in other species and can pinpoint various character quirks and failings about them through one of the strangest methods, their artwork. Of course it’s not always art that allows him to intuit the movements and mindset of his enemies, but it could be anything that a species has built, something they do, or something they value, that tips him off to something vital about their character and their motivations. In this manner he tends to be one of the most brilliant minds in the Star Wars universe since he sees things that others would miss, nuances that stand out to him and are buried to others since many seek to deal with what’s on the surface, not that which is below. This makes Thrawn a rather confusing figure as well as someone that operates on a level that’s well beyond many of his peers. Given the obvious xenophobia of the Empire at its height it was amazing that the blue-skinned Chiss officer was allowed to become an admiral, let alone a grand admiral, but his abilities and the skills he brought made him an interesting character for Emperor Palpatine, and kind of a nuisance for those that wanted to curry favor with the Emperor. ‘

Bringing Thrawn into the Star Wars franchise, into the movies or the various series, would be enticing simply because he brings another layer to the universe that hasn’t been seen in its entirety yet since the Chiss live and operate in the Unknown Regions, which hasn’t been fully explored in the live action movies but has been seen more than once in the books. This is a way to expand the universe and possibly give Star Wars fans more to think about despite the magnitude of the galaxy that they’ve already been given a look at over the years. The sheer size of the galaxy that so many Star Wars stories take place in is immense, but the fact that there’s more beyond it is even more impressive since it means there stories that remain untold to this day that could keep the franchise running for a long, long time if there are enough storytellers willing to take up the call. Bringing in Thrawn also delivers a villain that is not quite so evil as the Emperor or Darth Vader but is multifaceted in a way that makes it difficult to hate him entirely, but definitely makes people wary of him since Thrawn is a very calculating individual that knows how to read people and can make predictions based on his observations that are stunningly accurate. Bringing him in to the franchise during some point in the prequels or between the prequels and the original trilogy would be great since in the books he’s been an impressive figure that has often been a very influential individual as well. The only problem now would be explaining where he’s been the entire time.

Continuity has become a huge issue in the Star Wars franchise throughout the years as more and more of the story continues to be added in as the books and graphic novels have been released. The problem of course is that the older movies show no sign of the characters or mention of the situations that have unfolded before them. It’s easy enough to explain where Thrawn might have been during a great deal of the story, but given how influential he’s been, including him would no doubt be a delicate process.