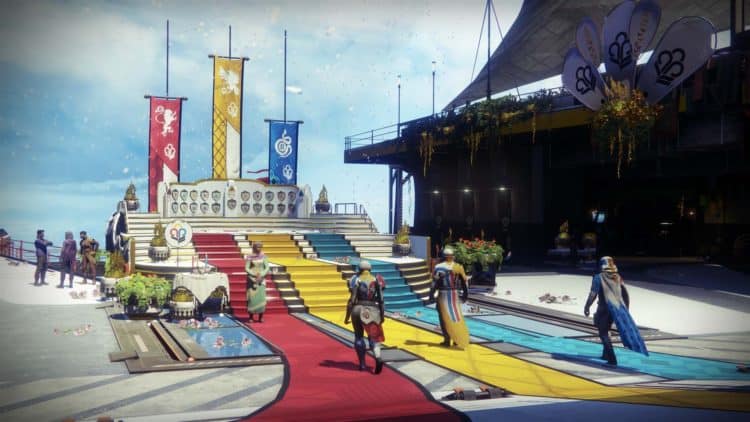 Well, the Guardian Games Closing Ceremonies in Destiny 2 have finally begun, and as expected, Hunters have taken the gold, which means their cloaks will remain gold until the next Guardian Games event, while Warlocks’ will remain silver, and Titans’ bronze. Hunters will also receive a statue at the side of the Titan Vanguard, Commander Zavala. Hopefully, for Hunter’s sake, this trophy will be a bit bigger and more prominent than the Titans’ previous trophy which was….disappointing to say the least (at least for Titans.) Now, even though it was a bit better than last year, let’s talk about what went wrong with this year’s Guardian Games event in Destiny 2, and why next year’s iteration of the event needs to be a bit different.

There really isn’t a whole lot that Guardian Games has to offer in terms of activities, and that needs to change going forward. Other seasonal events like Solstice of Heroes and Festival of the Lost have their own event activities including the European Aerial Zone (Solstice of Heroes) and the Infinite Forest (Festival of the Lost), so why doesn’t Guardian Games have its own seasonal event? Well, I’m not sure, because it should. Guardian Games relies on players participating in existing activities in the game including core playlist activities like Gambit, Crucible, and strikes, which is not really what people are looking for in a limited-time event. We really need a designated activity and I think it needs to be PvP oriented – we are vying to prove which Guardian class is superior, after all. Maybe a PvPvE activity where you’re not necessarily trying to eliminate each other, but rather just competing in a Leviathan-like gauntlet of various competitive objectives. I think that this would be perfect for Guardian Games, and would actually give people an incentive to play the game, rather than just mindlessly participate in pre-existing activities to earn Laurels…which brings me to my next point (how convenient!)

The whole Laurels system is a bit convoluted right now: basically you’ve got to equip your Guardian Games class item (this is fine and I don’t really think this needs to change), and then kill enemies with this item equipped to earn Laurels. Earning Laurels will allow you to then purchase a Contender Card that will give you a certain objective to complete in order to obtain a gold medal, which you will then need to head back to the Tower and turn it into the Guardian Games area. The issue with this is the same that will plague Armor Synthesis: it’s unnecessary. Let us just obtain medals by completing various objectives without having to go out of our way and interrupt the grind by going all the way back to the Tower to pick up a Contender Card. If you’re really trying to get the most out of your Laurels, you’re going to be spending more time traveling back and forth to the Tower than actually playing the game, and that’s no fun. The point of Laurels right now is to use them in order to purchase medals, so if you were able to just directly obtain medals by completing certain objectives, then Laurels are effectively useless and should probably just get tossed out the window. I get what Bungie was trying to do with them, but for me personally, it just seems like a waste of time, especially when you can get Laurels to drop all day and you can only hold 500 at a time. If nothing else, at the very least we need to get rid of the Laurel cap.

Sure, Guardian Games is a free event, and I understand that it’s free for all players, but it still takes all of the fun out of an event when most of the cool rewards – especially the armor set – is locked behind a paywall. Even if you’ve saved up the Bright Dust to purchase the ornaments for “free,” you’re still spending Bright Dust that could be spent on another non-event reward. I don’t think that this gives players much incentive to play throughout the whole event, when you can just log on for one day, buy the armor, and then log off. It would be great if you could earn a single piece of armor for a certain number of medals that you turn in – I would love this system. It’s just a bummer when you pay for a Season that includes Guardian Games that you’re still paying for most of the rewards that have been designed for the event. I just hope that for next year, Bungie changes up how rewards for all events work, and not just Guardian Games.

Overall, the Destiny 2 Guardian Games was another disappointment, especially when Warlocks didn’t win! Although, most of us are satisfied with second place, just as long as we don’t lose to Titans. I’m hoping that next year, Bungie really innovates on the event and brings us something completely new that we haven’t seen before.