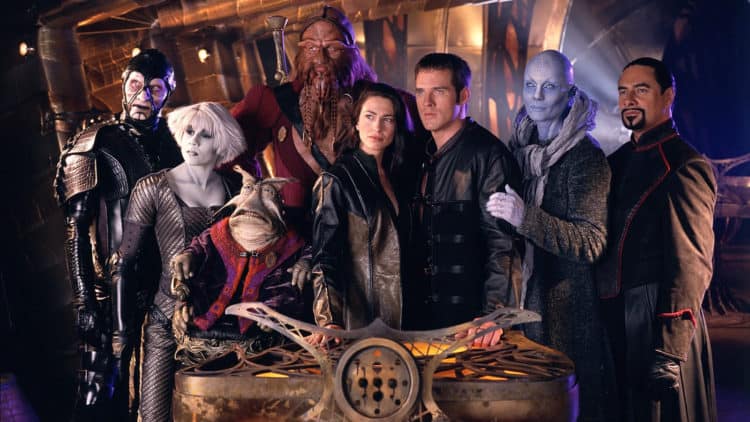 If Farscape was to be brought back it might need to be updated a bit and it might need an entirely new cast unless those that were in the original show were willing to come back.  That does sound like a possibility for some of them since there are a few actors out there that would love to back to the shows and movies they helped to make popular at one time. For a while, Farscape was one of the more appealing shows on the SyFy Channel, but after a while, as it happens with many shows, it was kind of shuffled to the back of the pack and then was taken off entirely. It’s fair to think that it could have gone a little further and really shaken things up in its own universe had the writers been able to take the story and really do something a little more dynamic with it. But as it stands, the series did end in 2003. The ragtag bunch that piloted the living ship known as Moya was interesting for a while, but the nature of fans is to move on to something else once the show they’re watching gets a bit stale. It’s harsh, but it’s true.

Bringing Farscape back is entirely possible and it might be the right time since there are a few different streaming services that might not mind trying to make something of his show since the premise isn’t that bad and it could be developed fairly easily. As far as finding actors, that’s usually the easy part, and it’s fair to think that some of the original actors might actually want to come back to star in some capacity or to at least have a cameo in the next version of the show since it would be a way to say thank you for the source material. But how long it would take to bring this idea to fruition is kind of hard to say since it also depends on what type of budget it would require.

That, in turn, would be up to how much any streaming service might want to invest in this show since it does feel as though Netflix might be interested, or Hulu, or maybe even Peacock, since the latter is attempting to snap up any property it can in order to keep itself noticeable. Wherever it might land it’s fair to think that this show would be watched by several of the older fans and would likely attract those who didn’t know that much about it when the show went off the air in the first place. The main theme might need to be reworked but it feels safe to say that there might not need to be too many changes to bring it back. This would definitely be the time for it since there’s more content out there now for people to watch and a lot of folks are loving the nostalgic look at the past that has been going on lately. If ever there was a time for Farscape to cash in on the fact that it was a part of that past then now is it.

There’s no guarantee that it would work, as there’s never any guarantee that any show is going to make a stunning comeback, but it’s worth the shot since people did enjoy this show back in the day and they were more than willing to try to get it to stick around. Obviously it didn’t really work as the show appeared to have run its course, but bringing it back shouldn’t be that big of a deal since there’s plenty of material to work with and a reboot would be able to capitalize on some of the other elements of the show that might not have been given as much attention. Given the kind of writers that could find various ways to work the story around and give a bit of life, it’s fair to state that Farscape could see its way onto a streaming network where it would do just fine. Whether it would survive past the first season though is anyone’s guess since cancelations appear to be the order of the day on some streaming sites.

But all in all, this isn’t a horrible idea and it could be interesting to see what might happen. There are likely plenty of fans who would rally for this show and try to see what could be made of it, but one has to wonder if it would be a huge deal or if it would simply be something to bring back for a limited series. After all, with so much content being developed across so many sites, it’s tough to think that every idea is going to get the same amount of attention. But it’s worth a shot.