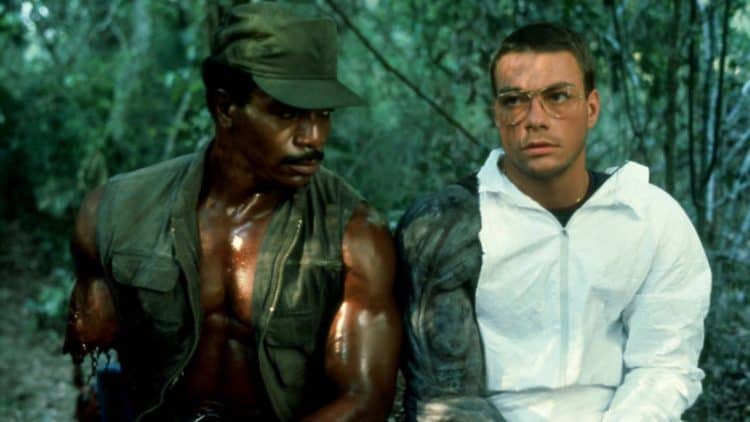 The Predator starring Arnold Schwarzenegger, who played the leading protagonist Major Dutch Schaefer has long since been considered one of the greatest action-science fiction movies of all time, who lead an elite special forces team into a jungle…. only to encounter a savage alien who was only interested in hunting particularly courageous, cunning, and strong human fighters, and ripping their spinal columns and skulls out as trophies to showcase its status as a powerful hunter.

In the movie after his men had been hunted one at a time by the alien, Schwarzenegger’s character went into a one on one battle with the Predator after discovering it could only see body heat and used that to hunt, and the alien was defeated at the last minute. Kevin Peter Hall, who played the Predator, gained acclaim for his role.

But he was never meant to play the Predator. Action star Jean-Claude Van Damme was originally cast to play the alien hunter. The original intention was to have Van Damme use his expertise in martial arts to make the Predator into a more agile, almost ninja-like fighter. That was the original concept and it seemed logical to have at the time since they felt an alien with ninja-like stealth rapidly moving through the trees was a terrifying enemy.

At first, Van Damme must have felt it was exciting being cast as the titular character with one of the worlds biggest action stars. But there was confusion since he had at first believed the makeup he’d receive for the role would be minimal, but they took casts of his body instead in order to fashion the famous Predator look which would take away his mobility and would be too large for him to run around in.

However Jean-Claude Van Damme later left production, and for a long time there have been many rumors about why this happened, but nothing definitive has emerged until recently.

In this article, we shall clear up a question, why did Van Damme leave Predator?

Jean-Claude Van Damme did not leave the Predator production of his own accord. He was simply booted out. Jean-Claude has made it very clear in an interview with The Hollywood Reporter the rumors are false, that he wasn’t angry when he found out the audience was not going to see his face at any point underneath that famous alien visage, but it was simply down to him being uncomfortable in the Predator’s costume, and not being able to handle the stunts he was expected to perform in a safe manner. He even admitted to a friend he wasn’t sure if he was going to make it as the Predator, but the problems were more than that.

It has been reported that more than once during production Van Damme complained about the monster suit being too hot for him to cope with and he struggled with his mobility. It’s even been alleged he passed out due to problems he had breathing when in costume. In the end, the Predator was forced to stand on stilts, but the role was no longer what had been originally envisioned for Van Damme. The good news was the design team also realized what they were being asked to do was impossible since the costume was so large and the production team wanted the Predator to be filed on muddy slopes in Mexico which was physically impossible for Van Damme to handle.

It also didn’t help that Van Damme would be running around wearing a red version of the suit which would be designed to be keyed out at the production stage to showcase the alien’s invisibility, but no-one had bothered to tell him. The actor must have been furious. As stated above, the original intent was to make the Predator into an agile, lethal ninja like fighter and give the alien hunter more martial art orientated style than the one we are used to, but he quickly came to believe the stunts expected of him were just too dangerous. It didn’t help matters the setting of the showdown between the Predator and Schwarzenegger’s character was too cumbersome and hard to manage in the jungle setting of the movie.

Anyway, Van Damme revealed these events led to his axing by Joel Silver, one of the biggest Hollywood producers at the time, and his replacement being the familiar Kevin Peter Hall. In the end, this action was the right one since Van Damme, when compared to Schwarzenegger, and Carl Weathers who played Dillon who was involved with the CIA, and lastly Jesse Ventura who played Blaine who totted a massive machine gun, was not physically impressive. Schwarzenegger, Ventura, and Weathers were actors who were well known for their bodybuilding regimens, and it was eventually decided that a far more physically imposing actor would be needed to make the Predator more vicious and terrifying anyway.

The Good news was this would not be the end of Van Damme, who has gone on to have a successful career of his own.