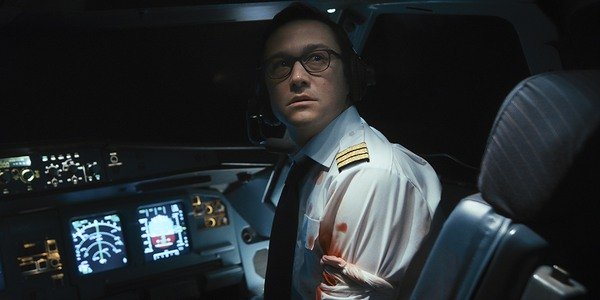 It’s kind of amusing that the movie 7500, Joseph Gordon-Levitt’s first in the last four years, has the writer/director Peter Vollrath claiming/joking that you can’t possibly show a movie about airplane travel to those traveling on an airplane. It’s definitely more jest than anything, as I can recall watching the movie Alive during a trip to Hawaii as a pre-teen. There is something unnerving about watching a movie about a plane hijacking while one is in the air to be certain, but with the state of paranoia that’s been gripping the world as of late it does feel as though people need to lighten up a bit now and then. Getting back to the subject of JGL and his first appearance in years it’s intriguing to see what he’s signed up for and what it might mean for his career. Since his time as a teenager on 3rd Rock from the Sun and then his move into movies such as Brick and Looper and various other titles it’s been seen that he’s grown quite a bit as a human being and as an actor, becoming one of the more sought-after names in Hollywood at one point until he stepped away for a while. The reason he did so? He wanted to be a family man once he had kids. With his kids being born in 2015 and 2017 he made the decision to stay at home and be the family man for a while, which is a laudable act that speaks highly of his character.

It does sound as though it might have been a bit difficult to come back and wonder just what he would be doing after such a hiatus, but the actual staying home with the children had to be a big decision as well. Plenty of actors have gone right back to work, as soon as they’re able, after their children have been born, largely because they feel the need to keep up their reputation and because they might need the money, but Joseph decided to take himself out of the game for a bit to help care for his kids, which is something to admire in pretty much anyone. This isn’t to say that those that go right back to work are any less dedicated as parents, but there’s a time in every actor’s life when they’ve got to prioritize their time and decide what’s a little more important, spending time with family or earning the money to support that family. In the case of many actors it feels safe to say that upon having children that they might be able to afford stepping away for a little bit to take care of family matters. But with some the drive to return to work is just too strong and they can’t stay away for long.

The need to get back on the set and to keep working is pretty alluring for a lot of actors that love their work, and Joseph isn’t really immune to it, but staying away for his family was obviously just as alluring considering how long he’s been gone. For a while it felt as though we were seeing him everywhere he could possibly be, and there was even a desire to see him star in another Batman movie, or perhaps a version of Nightwing considering how The Dark Knight Rises ended. In fact it does feel safe to say that such a movie might still be an idea worthy of his time if he’s still up for it, but at the moment his current movie is no doubt going to raise a few eyebrows simply because of its content and subject. Hijacking movies used to be something that people didn’t think twice about, but ever since 9/11 it’s been seen that any movie dealing with planes or hijackings of any sort will be looked at askance by some people and with increasing anxiety by others. There’s a good reason for it obviously since the moment in time that occurred a while back is still fresh in the minds of many people no matter that almost two decade have passed since that tragic event. But in this day and age it doesn’t take much more than a memory to get people thinking about such things, particularly when the moment was so horrible for those involved and for the nation as a whole.

As the movie to herald his return some might think that Joseph might have made a social error of some sort, but instead it feels good to have him back and it also feels just as good to realize that he’ll be back for a while to come. If he starts getting picky about the movies he takes on then so be it, but at the very least he’s back doing what he appears to enjoy.