Home
Movies
Why Men Should Make Themselves Watch “Waiting to Exhale” 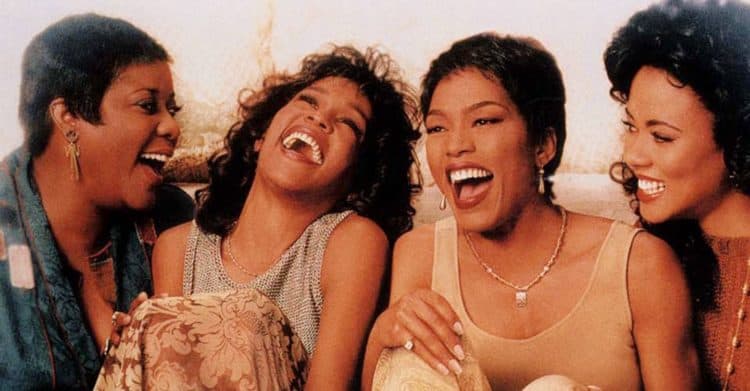 There might be a couple of reasons why men should watch Waiting to Exhale, and unfortunately pure enjoyment isn’t one of the most typical. One would be the simple fact that as men we seem to get misrepresented (imagine that) as misogynists and hustlers that just want things our way without consideration of the women in our lives, and that the majority of us are out to please ourselves first and anyone and everyone else second. Yeah, get good laugh with that one, because the words “not all men” seem to trigger a lot of people these days, not just women, and will often be taken as the need of a guilty conscience to defend itself. Erika Marie from Vocally might even chime in with an opinion on this since she too seemed to mimic the idea that a lot of men just didn’t measure up in this film. The second reason would be a little more positive as it could be interpreted as how to treat the women in your life so that they’ll feel the need to exhale, or relax in other words. There have been a lot of films that have shown the difficult between men and women and many like this one seem to paint men in the most negative light possible for reasons that only the director might be able to reveal.

It goes without saying that there are a lot of men out there that do in fact hold to the old ways of treating women like objects and keeping them ‘in their place’ so to speak. But thankfully this isn’t the overall, universal idea that many men in the current era are being given. The movie is kind of a hard pill for many men to swallow as Stephen Hunter from The Baltimore Sun puts it, but it’s also something to laugh at as you come to realize the caricatures of ‘men’ that are presented and the fact that women have just as many expectations of their male counterparts as men seem to have of them. There are plenty of positive notes about this movie as many people would no doubt point out and as far as men being shown as either slick, hustling types that don’t care about anyone’s happiness but their own, or being foolish individuals that take people for granted, it’s a bit insulting to men but easy enough to weather since after all it is a movie. But the positives to take from this picture are plentiful if you look at it from a certain point of view.

That of course would be the view of the females that star in the movie since their lives are seen to rotate, at first, around men that treat them like dirt and otherwise don’t seem to know that they’re alive or don’t care. While they don’t necessarily take a healthy approach to moving on at times they do move on, which is the point. Plus the whole idea of African-American women being seen as strong, caring, and definitely professional and well off is another positive to be taken away from this movie since as Jane Ganahl of SFGate wrote it would seem that too often black women are portrayed as single mothers on welfare or addicted to one substance or another and living in ghettos or some other place that they find it difficult if not impossible to get out of. While I’m not too sure about that claim, it does happen but not quite as often these days as before, it is inspiring to find women being able to star in a movie that’s all about them and for them.

The dating scene between men and women can be chaotic but for different reasons than the movie might suggest. Women and men are both looking for connections now and again, some just for a pleasant night, others for something a little more permanent, but the truth of it is that the dating scene is quite often like a battlefield that one has to navigate through in an effort to find the right partner. There are a great many pitfalls and you might find yourself torn apart by the wrong person if you put your faith in someone that has no interest other than satisfying their own needs. But depicting one side or the other as the antagonist or as bumbling, stumbling fools that barely know what to do kind of defeats the whole point of getting together in the first place. It’s great that women have these movies since it shows them that there is a chance for solidarity when they absolutely need it. It’s also great since it shows four women in positions of emotional instability that find a way to come together and support one another. But overall let’s be honest, while women are waiting to exhale after finding the right man, men are constantly wondering if they’ll ever be good enough for the woman that chooses them.