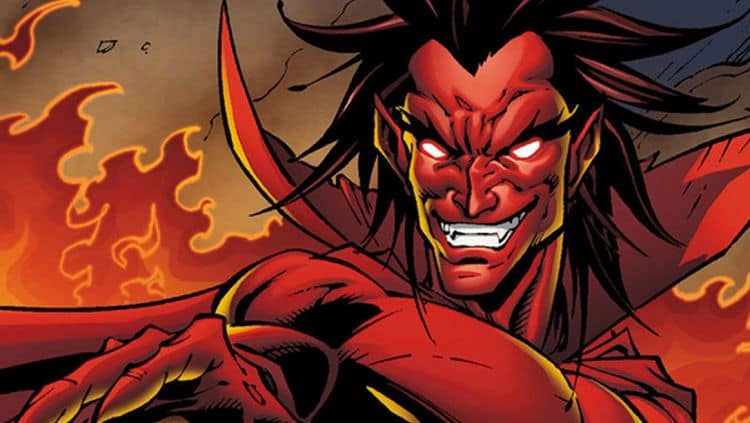 There are a lot of characters that really need to be brought into the MCU and given their own show, or movie, or at least be made part of something in a big way, and Mephisto is one of those that probably should have already made his appearance at this time since for a long time he’s been pretty much sewn into the fabric of the Marvel universe. He’s been listed as the actual devil of the Marvel universe but this has also been disputed since his power levels are insanely high but he’s still been bested by the likes of Thanos and does have individuals that could stomp him into a red puddle. When it comes to any earthbound hero or villain though there aren’t many that can top Mephisto since he is a literal devil and in his home plane he rules supreme and is undeniably deadly. But it’d be interesting to think that, like the Skrulls, he’s been kicking around the MCU for a while and no one wanted to say anything, since there’s likely a character in there somewhere that could be retconned into a kind of Mephisto surrogate given that he’s the type of villain that and does change his shape every now and then to fool those around him and lull them into a bit of false confidence.

If we see him at all in phase 4 it’s going to be a bit of surprise, but some folks get the feeling that we might see him in WandaVision at some point, and rather than argue with this I do think it would be kind of interesting since Mephisto is known for tricking people into believing what he wants them to believe for his own ends. But it would be kind of hard to reason why he might want to use Wanda for anything other than to upset the fabric of reality since his goals are usually along the lines of domination using every trick that knows how to use. He has been utilized in a Marvel movie in the past since the origin of the Ghost Rider has everything to do with Mephisto seeing as how the spirit that he infuses Johnny Blaze with is in a sense his bounty hunter, the demon known as Zarathos, who was also a rival at one point since the Ghost Rider has been said to have nearly limitless power, but is only ever held in check by those that restrain him, such as Blaze or Mephisto. That does feel like it would mean that Mephisto, as powerful as he is, does recognize other powers that are greater than his own.

Bringing him into the MCU would be a lot of fun, from a horror standpoint, since while he’s definitely evil without any apologies he’s also something of a trickster and could possibly be given the same treatment that’s been given to the Christian devil in the show Lucifer, only with a much more wicked twist. Unleashing him on the MCU would be a good idea since not only would it test the new batch of heroes that are going to be unveiled but it would no doubt prompt another big story, possibly, that could bring more and more characters into the fray and thereby continue to unite the MCU in an even bigger way than Endgame did. Let’s face it, Endgame is going to be hard to match, let alone top since at least a few of the heroes that were so vital to the movie are going to be gone unless fans get their way and they’re somehow brought back. But bringing Mephisto in almost makes it feel as though the movie would have to be something big and important since the MCU devil doesn’t really bother with anything that’s seen as beneath him a lot of times, as he’s a pretty major villain that needs a challenge to face. Bringing him out for just some random adventure doesn’t feel like it would work that well, but maybe if it had to do with something on the scale of Endgame it would be great since in the comics, Mephisto was a part of The Infinity Gauntlet saga, and in the end, he tried to doublecross Thanos and paid the price for it since the mad titan throttled him for his avarice.

But bringing Mephisto in is a definite must since he’s one of the evilest bad guys in the entire Marvel universe and in terms of the power he wields he’s definitely someone that can be seen as a very potent threat, especially since he can handle quite a few opponents on his own, and often at the same time. For Mephisto to enter the MCU it does feel as though a movie would need to be something vital to the franchise.