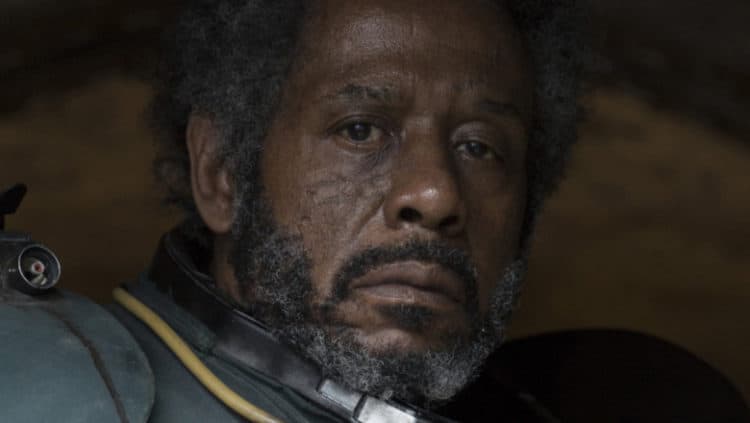 If Saw Gerrera ever gets his own series or movie, and that’s still a big ‘if’, it’s likely that we won’t see Forest Whitaker take the role again since as pretty much everyone knows at this point, Saw was killed in the movie Rogue One when the Empire decided to test the Death Star on the planet of Jedha. This would mean that any series or movie based on his life would need a younger version of Saw, and someone who could pull off the look and act of an extremist in training at the very least since as a lot of fans know, Saw was the kind of guy that was bound and determined to take the fight to the Empire in a way that somehow made the rest of the Rebel Alliance queasy. That’s amusing really since in Rogue One it was established that those that didn’t work in the high command of the Alliance were often bound to do things that were questionable to say the least and downright immoral when one really got down to it. Seriously, watching Cassian Andor simply kill someone in the movie since he was no longer useful pushed the Alliance into a different light, as did the near act of assassinating Jyn Erso’s father. Saw was an extremist, but even he paused at times when it came to those that he cared about on a deeper level it would appear since his humanity hadn’t fled entirely. But by the end of his life, the man had been through quite a bit and he’d likely seen a lot of his friends and companions perish either thanks to the Empire or in some other way. The Clone Wars were far more taxing on many worlds than a lot of fans realize since by and large Star Wars is still seeking to cater to kids and families, meaning that the dirtier and nastier parts of the war aren’t always seen or touched upon.

But this was seen in Saw since thanks to the acting of Forest Whitaker the extremist leader was depicted as someone who was nearly worn out, beaten up, and definitely had seen better days. But he wasn’t beaten down obviously and he had enough energy to keep up the fight until Jedha when he finally finished his own mission and passed along his information to Jyn. The retconning of the exhaust port that would eventually spell the doom of the Death Star, turning it into a hidden flaw that Galen Erso devised, was supposedly a smart move, but many people still had to ask why it hadn’t been noticed when the Empire had enough people to double and triple-check everything a few times over. For the sake of the story, it didn’t matter since Saw was able to deliver the information to Jyn and to let her see the last message her father had left her. Saw was a lot of things in the movie, but he wasn’t heartless, which makes him an interesting character to think about and someone that might be fun to see developed a little further. One could argue that this was done during the Clone Wars animated series, but a live-action Saw would be preferable since it would be fun to see his character arc from the Clone Wars onward until he finally catches up to Jyn’s story. There are so many stories that can be told in the Star Wars universe, and a lot of them have a direct or indirect effect on the main stories that we’ve enjoyed thus far. But Saw is someone that was fighting during the Clone Wars and fought the Separatists and then the rising Empire when they started to form, so the guy has been through a lot.

It would be more than intriguing to see how his story develops, and what would make it even better is if it would keep a sense of continuity with the animated series and take things even further, since negating one series for the sake of another isn’t the desire. It’s not even entirely certain how Lucasfilm would handle something like this if the idea ever came to fruition, but it’s fair to think that they would at least try to make it work and perhaps bring in a few other key characters if they could in order to give the gravitas it would need in order to become a fully functioning part of the overall story of Star Wars. Considering that people have been calling for other characters to get a little more attention, often characters that don’t really have a serious arc in the story, it should be easy to see the wisdom in bringing Saw to the table for his own series or perhaps even a limited series. It could work.