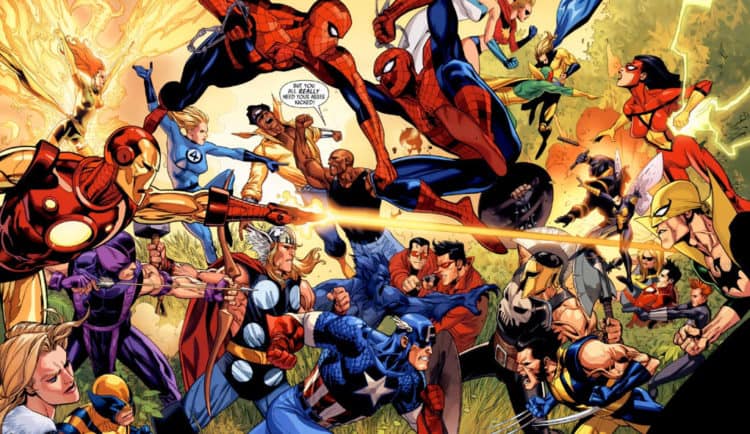 If you want to read a Marvel comic that’s pretty much a horror story, check out Secret Invasion. What’s it about? Well, for those who love the Marvel Cinematic Universe, but don’t read the comics, watch Captain Marvel again. After rewatching that movie again recently, I thought about how Marvel is going to adapt the Secret Invasion comic into a television series. My first thought wasn’t really on the excitement level that I wanted it to be on. I was actually scratching my head more than anything else.

Now I’ll confess that Secret Invasion is one of those Marvel comics I love that I still don’t own. Collecting comics get expensive, so forgive me. After hearing the news that it’ll be adapted for the MCU, I feel like that’s the extra incentive I need to break out some money for it. I love that storyline and I’ve been wanting to see it adapted for the MCU for years. I was expecting Marvel to set up that story after Captain Marvel introduced the Skrulls. However, I was not expecting Marvel to turn Secret Invasion into a television series for Disney+.

Now I don’t mean to say that like it’s a bad thing. You know what? I like to think positive and believe that it’s going to be awesome. After all, our main man Samuel L. Jackson is going to be the lead behind it. Whenever Sam is attached to something, it sparks my interest. Even when it’s not the best movie (in this case, show) he still brings that Sam Jackson presence that no one else can bring.

Since we’re talking about Samuel L. Jackson, let’s talk about the last time we saw Colonel Nick Fury. No, he wasn’t actually recruiting Peter Parker for the fight against the Elementals. If you stuck around for the post-credits scene, it was revealed that “Nick Fury” was actually a Skrull. Not just any Skrull, though. The Skrull who impersonated Fury was Talos, the enemy-turned-ally of Captain Marvel and Fury. And if you remember his Skrull wife, Soren, she was the Skrull impersonating Maria Hill. Speaking of Hill, where the heck was she during the events of Far From Home? Was she really on vacation with Fury? Somehow, I doubt that, but then again, there’s nothing wrong with taking some vacation time.

Okay, so here’s the part where I get to the Secret Invasion connection. Fury plays a big part in protecting Earth from all kinds of threats, but now he seems to be getting cozy with the Skrulls. The way the Skrulls are portrayed in the MCU completely contradicts their villainous ways in the comics. Not only are they villains in the comics, but they’re probably the most formidable enemies the Avengers have ever faced. Why? Well, the fact that they’re shapeshifters says it all.

When I watched the beginning of Captain Marvel, I was very intrigued in by the way it handled the Skrulls. They weren’t as technologically advanced as the Kree, but they posed a serious threat to them by using their skills of cunning and deception. Their introduction scene showed how they can effectively use their shapeshifting abilities and turn it into a form of guerrilla warfare. And when that first Skrull roared as a signal to the other Skrulls, it reminded me of a horror movie. That’s what really drew me into the Skrulls for the movie, but then it decided to throw us a curveball by making them good guys. Not exactly how we comic nuts are used to seeing them, huh?

So how will Secret Invasion work if the Skrulls in the MCU are good guys? I’ve written about this before and I have a theory that there will be a rogue faction of Skrulls that resemble the villainous shapeshifting aliens we’re used to seeing them as in the comics. This rogue faction will be led by the most villainous of the Skrulls, the conniving Queen Veranke. She is a very underrated villain from the comics, not just because of her manipulative, treacherous nature, but because of the damage she’s done to the heroes.

We get to see the full extent of the damage she’s done in the pages of Secret Invasion. She successfully infiltrated the ranks of the Avengers for quite some time by impersonating Spider-Woman. This allowed her to carry out her invasion by gathering her forces and by the time Secret Invasion came around, she crippled the Avengers and launched a full-scale invasion of Earth. Not only did she cause the death of Janet Van Dyne, aka the Wasp, but she also paved the way for Norman Osborn to become the new leader of the Avengers. Her actions led to the beginning of Dark Reign, one of the darkest chapters in Marvel history. Her Secret Invasion left many wounds that took many years to heal for the heroes of Marvel.

The thing that I loved most about Secret Invasion was that it felt like a horror story. Even as you flipped through the pages, we got to see hauntingly realistically photos of human children casually interacting with Skrull children. All of those pages were repeating the same phrase that the Skrulls were saying throughout the comic. It’s basically their own little religious chant and it’s actually kind of creepy. The phrase is a simple “He loves you”. They say it quite a lot and they always make it creepy. These Skrull are definitely not the ones we saw in Captain Marvel.

So with all that being said, the problem with Secret Invasion being a series instead of a movie is because of the horror element the Skrulls bring to Marvel. They’re not just scary because they look scary, but because they can study their targets and use that knowledge to impersonate them and hide in plain sight. Even when they do reveal themselves, they’re still dangerously subtle about it. That’s how they’ve been a thorn in the side of the Avengers for years.

So how will this Secret Invasion show handle them? My guess is that they’ll spend some time showing us how Fury built his friendship further with the good Skrulls. After he gains their trust, he’s sure to come across Skrulls like Veranke and we’ll get to see her build a disdain for humans. She can also have conflicting views with Talos and his friendship with Fury. Showing the roots of Queen Veranke can be interesting, but the strength of her villainy lies in her secrecy. A show can indeed establish her as a character and show us her origins, but imagine if she’s been a character we’re already familiar with in the MCU. If she spent all this time impersonating a well-known character just to set up the Secret Invasion storyline, that would be a wicked twist. It’s all about secrecy when it comes to the Skrulls.

Now again, the show can be good and I hope it will be. I just think Secret Invasion can be the next Infinity War-level Avengers movie. The Skrulls are a threat that require the whole team, so why just let Nick Fury and Captain Marvel fight them? If the show actually takes time to set that up, it could tie into many upcoming Marvel movies. I’m very excited either way.