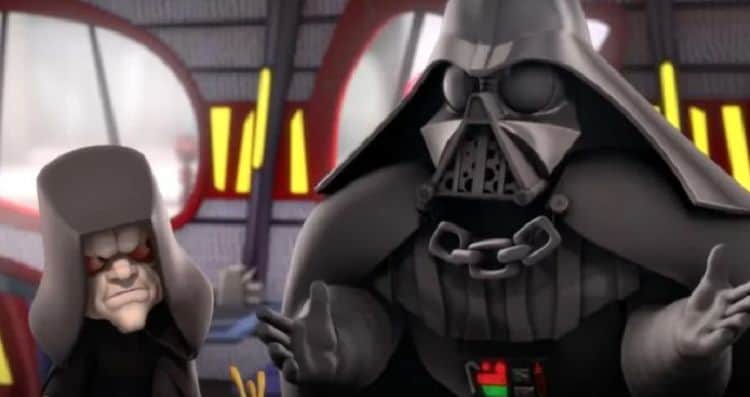 It’s enough to wonder why Disney does certain things and then pulls away from others, but it’s also a little frustrating when we’re given glimpses of what the Mouse House could have released and decided not to. Star Wars: Detours looks pretty hilarious in a lot of ways and yet, thanks to Disney’s decision not to air it, at least not yet, the chance that we’ll see it at all feels like it might be next to nil. Any and all outrage concerning this development is kind of hard to muster even though it would be all kinds of great to see this, especially since one of those who worked on the project, Seth Green isn’t that broken up about it. Likely, Green is a bit disappointed that all that hard work won’t get its due on Disney+, but at the same time, he sounds happy to have worked on something that pulled so many talented people together and gave them all something to focus on. Green had a chance to explain why he’s not that broken up about the lost opportunity. Here are his words via MovieWeb:

“I don’t really have an emotional position because I got to spend four straight years making something with George Lucas. And my partner and I, and all of the people that got to work on it, the artists and actors and directors and animators, we all got to make something Star Wars with the guy who created it. And so I know over those four years that he was having fun, and that’s really all I care about. I got a priceless experience with one of my truest heroes, and got to see him laugh and enjoy all of the things that he had created, in a time before he agreed to sell them to somebody else.”

So really, stating that one is upset about Disney’s decision not to air this show isn’t exactly easy since if the creators aren’t that broken up about it, why should the rest of us be?

It’s fair to say that a lot of people have been extremely frustrated with Disney when it comes to some of the properties they’ve taken control of, especially considering that the Mouse House has made a few questionable decisions when pushing forward with the franchises they’ve taken over. There have been plenty of memes, GIF’s, and other expressions that have been created alluding to Disney’s mishandling of some of its more popular properties, and in some cases, it feels as though the fans don’t fully understand what they’re saying, but it also feels as though the vision of those being brought in to create the shows and the movies are so far off base that one can’t imagine how they’ve been given the green light. The trouble with Star Wars though, as it’s been for a long time now, is that George Lucas had a specific vision, the fans have their own visions, and now Disney has its own vision of how things should go. From the arguments over why the EU is or isn’t the best way to go for the franchise to arguments over which movie is the best, Star Wars fans and creatives are constantly reaching one impasse after another.

Some might want to argue that there is a definitive direction that Star Wars needs to move in, while others might say that no, it should be allowed to branch as much as possible so long as the continuity is held. You see? It’s a morass of opinions and ideas that only take shape when one controlling body comes together to say ‘this is how it’s going to be’. Basically, those that hold control over the franchise are going to be those who are making the decisions. From a legal standpoint that’s how things work, and how it’s going to be. Fans might argue against it, but unless Disney is going to change their mind based on what fans say, versus what fans are willing to spend their money on, then the fans can squawk all they want. But as long as that cash is changing hands, Disney can afford to hit the mute button and not worry themselves over public opinion.

It’s always possible that somewhere down the line that we’ll see Detours make its way to Disney+, likely because the Mouse House will think that it’s a good idea, and possibly believe that they’ve come up with a great idea that will entertain the fans. At that point, it might be time to just smile, accept it, and realize that Disney is, like always, a corporation that will pat itself on the back for being innovative when coming up with something that many upon many people have already been praising and trying to push for years on end. Oh well.