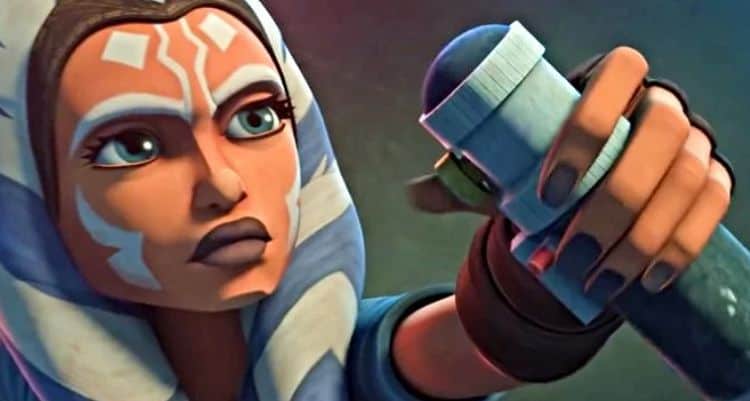 Well, it took me a while, but I am now completely caught up with the Clone Wars series. Staying at home has given me the luxury of actually being able to binge watch some awesome shows, and the Clone Wars is one series that I’ve put aside for too long. It’s unfortunate that Star Wars fans have lost their faith in the franchise, but if there’s one department that has succeeded in retaining our attention, it’s the shows. First off, I must say, kudos to Disney for giving us Disney+. I subscribed to that service just to watch The Mandalorian, still worrying if it was worth the money; thank goodness The Mandalorian was awesome and my worries were suppressed. I was honestly ready to cancel my subscription, but I decided to keep it a little while longer to check out the other things it had to offer.

Guess what other show I checked out afterwards? That’s right, the animated series that began in late 2008, better known as Star Wars: The Clone Wars. Canonically, the show takes place between the events of Attack of the Clones and Revenge of the Sith. The Clone Wars carried on for at least three years, meaning the Jedi and the Clones fought a lot of battles together. For me, it’s one of my favorite eras in the whole saga, because it marked the final years of the Jedi Order. It introduced us to some cool characters, delivered some intense action, and it’s sure to give us an awesome conclusion for the final season. Yeah, we know where it leads to, but we just have to see the final steps to the destination.

After watching the Clone Wars series, I came to a miraculous realization: this show has officially made me appreciate the prequels more. No, it wasn’t the Disney-produced trilogy or the direction of J.J. Abrams or Rian Johnson, it was the Clone Wars series. Why, you ask? Well, it’s a long story, but I’ll start from the beginning. Having Disney+ has allowed to me revisit everything that is Star Wars, the good and the bad. I rewatched the original trilogy, the first two Disney-produced movies, and ended with the prequels. Remember when pretty much everyone despised the prequel trilogy? Ever since the sequel trilogy ended, it seems that is no longer the case. I get it, people were disappointed with the new trilogy, but does that automatically make the prequels better?

The answer is ultimately no, but I must admit, the prequels did help expand the Star Wars storyline in many ways. It set the stages for the original trilogy, expanded the lore, and introduced some interesting characters. The ideas behind all of these were great, but the biggest crime of the prequel trilogy is that it failed to execute them properly. Yes, you can blame George Lucas all you want, but come on, it was a lot to cram into for just three movies. That’s where the golden opportunity of a show lies. Any movie simply doesn’t have the time to draw out every little subplot. A television show, however, has much more time to flush out multiple subplots and develop the characters more. That’s exactly what the Clone Wars series did for the prequels and it did it brilliantly.

Speaking of character development, think about the Jedi from the prequels who weren’t Anakin or Obi-Wan. Jedi Masters like Plo Koon, Kit Fisto, Aayla Secura, Shaak Ti, and Ki Adi Mundi, were characters who showed their faces many times in the prequels, but said nothing (except Mundi, but nothing important). The Clone Wars show gave them real arcs to work with and showed us why these Jedi were Masters and well-respected members of the Order.

Master Plo Koon was the Jedi who discovered Ahsoka Tano and inducted her into the Order. He even led his own unit of Clones called, The Wolf Pack, and led them in many battles during the war. His defining moment came when his Clone Troopers told him they were meant to be expendable, to which he replied, “Not to me.” Now that’s an ideal Jedi Master. Even the fish-faced Jedi Master, Kit Fisto, showed his true skills when he took on General Grievous while expressing his famous smile. Are we sure this is the same guy who lasted about eight seconds against Palpatine?

All the Jedi had their awesome moments and their moments of wisdom. This made them admirable characters we can actually care about, not to mention they actually painted a nice picture of the Jedi Order they served. Speaking of the Jedi Order, we were supposed to believe that they were corrupt because of their refusal to promote Anakin to Jedi Master. That fell pretty flat, especially since Anakin didn’t exactly deserve the rank. The Jedi code was flawed, though, considering it forbade Jedi to form attachments. Because of that rule, Anakin was forced to marry Padme in secret, and that stunk for him. However, his attachment and fear of loss was the cause of him turning to the dark side. So the Jedi code is flawed, but in the end, they were ultimately right about the dangers of forming attachments.

Lucas was trying to sell us on the idea that the fall of the Jedi Order was inevitable because of their corruption, but that vibe didn’t quite sell. The Order fell, because they thought they knew everything, but clearly didn’t. The prequels failed on that aspect, but the Clone Wars series rectified that misstep. The best example of this is when Ahsoka was framed for murder and expelled from the Jedi Order. The Jedi Council chose to not side with Ahsoka during her trial, much to Anakin’s chagrin. Although she was cleared of the charges and the Council’s willingness to reinstate her as a Jedi, Ahsoka became disillusioned with the Order and chose to walk away from it permanently. Her decision devastated Anakin and showed how the Jedi can really lack compassion in their pursuit of justice.

In a way, this was the beginning of Anakin’s shaken faith in the Jedi. And yes, his chemistry with Ahsoka was far more organic than his chemistry with Padme. Ahsoka’s decision to leave the Jedi was crucial for her development and Anakin’s, but the biggest point it delivered was how flawed the Jedi Order truly was. It reassured us that the Jedi really did needed to end.

Speaking of that, let’s just appreciate how the Jedi and the Clones were the perfect comrades. They developed a strong bond during the Clone Wars and were willing to die for each other. If the Jedi ever showed compassion, it was towards their Clone Troopers. Clone Commanders like Cody and Rex (best Clone ever) deeply respected their Jedi commanders and followed them to the darkest corners of the galaxy. This chemistry was crucial for the series, because we knew what was eventually going to happen.

When Order 66 came, the Clones turned on the Jedi and nearly exterminated them all. It was sad to watch in Revenge of the Sith, but the Clone Wars series builds up the relationships the Jedi and Clones formed during their years of fighting side by side. By the time we see Order 66 executed (again), it will be even more tragic, and it’s because the series spent so much time developing the friendships between the Jedi and the Clones. Oh man, I really don’t think I can sit through it a second time.

Above anything else, the Clone Wars series filled in the blanks that were created by the prequels. Anyone else wonder why the Jedi never questioned how a dead Jedi named Sifo-Dyas somehow ordered the creation of a Clone army? Unanswered questions like these were answered in the show and expanded on everything the prequels set the stage for. The show is supposed to end soon, but if you ask me, it’s one of the best things to ever happen to Star Wars. Anything that can actually justify the existence of the prequels is a winner in my book.