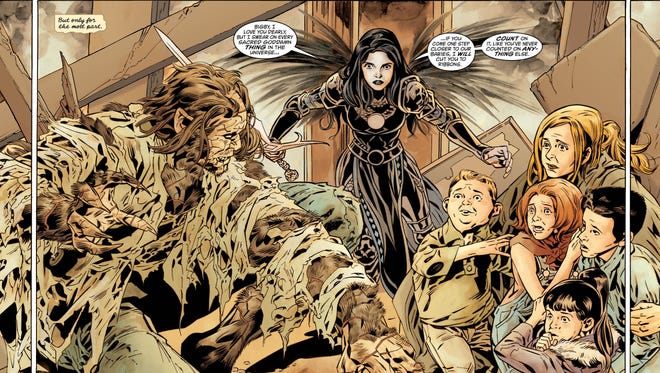 It’s been a while since I’ve read the Fables comics, but I’d rather not have cherished childhood memories tarnished any further. Actually, who am I kidding? I like seeing different iterations of characters that I’m already familiar with. That’s actually what turned me on to the Fables comics in the first place. All the best children’s characters from old works of folklore literature and fairy tales were thrown into the modern age. As for the way they were portrayed in the books, well… they’re not exactly suitable for the eyes of children.

This comic series has everything that makes it not appropriate for children, including sex, murder, and a lot more violence. If you’re a guy who grew up in the nineties and loved some old Disney movies like I did, give Fables a read. You’ll see some of your favorite characters in a different kind of light, and not a good one.

Honestly, that’s not a bad thing, because now I want to see Fables adapted into a television series. If you’re a gamer, just picture the show like the Wolf Among Us video game. For those who are unfamiliar with it, it’s officially canon with the comic series and serves as a prequel to them. Yes, Telltale is shut down, but do not fear, a sequel to the game is coming. We don’t know when and we don’t know what it’s about, but we are getting it. That’s good news, but I say why stop there? Fables is the kind of series that can be played with for a television show in many ways.

Let’s start with the chief characters. The main protagonist of the series is the Big Bad Wolf. Wait, the same Big Bad Wolf who tried to eat sweet Little Red Riding Hood? Yes, that one. In the comics and the game, he’s called Bigby. Oh, and he’s actually trying to turn a new leaf. In fact, he’s the sheriff of Fabletown. Fabletown is the place where all the fairy tale characters and creatures escaped to and made their sanctuary after being chased out of their home by a mysterious figure known as The Adversary. It’s also set in New York in the year of 1986 and it’s basically a slum. They’re not happy there, but they try to get on with their lives like regular folk.

So which other popular folklore characters are under Bigby’s protection? Fables really doesn’t hold back and it likes being weird. Who stopped The Big Bad Wolf? The Woodsman returns and he’s Bigby’s biggest rival. In the world of Fables, The Woodsman was a hero after defeating The Big Bad Wolf. However, The Woodsman’s heroic status didn’t last long, as he descended to a life of debauchery and pettiness. In the first episode of the game, Bigby even beats him in a brawl after he abuses a prostitute. Their enmity carries out for the whole series, but it’s an interesting take to see a heroic character fall from grace while the villain works towards redemption. Then again, why was The Woodsman just walking around the woods with the axe? Was he really just chopping wood? Family Guy, anyone?

Fabletown has more residents that’ll many people will likely recognize. The most prominent female of the series is none other than Snow White. Her story in the Fables universe is almost the same as the one you’re familiar with, but with some key differences. The most crucial one is her relationship with Prince Charming and the seven dwarfs. In the Fables series, the dwarfs treat her very cruelly and actually throw her body away after she falls into the coma after the apple. Prince Charming kisses her, she wakes up, they fall in love, and she learns how to use a sword. She got her revenge on the seven dwarfs, but then her marriage to Prince Charming falls apart. Yes, Prince Charming is just the pretty boy hero on the outside in Fables. He’s actually a narcissistic womanizer and rather unfaithful to his wives.

Snow White, however, doesn’t let these tragic experiences changer her for the worse. She’s the strongest female presence of the series and often assist Bigby in his adventures. She lives in Fabletown and works with Mayor Ichabob Crane. Yes, the Sleepy Hallow guy. As the Mayor of Fabletown, he is immensely corrupt and is quite cowardly, much like in the original tale. Snow White works in his office, but often works against him. Fables involves dirty politics. How much more real can it get?

Well, it doesn’t ignore the more exotic folklore characters. One of the most odd characters in the series is Bufkin. He’s one of the winged monkeys from the Oz tales and works as Fabletown’s librarian. If you remember the movie, these creatures are pretty mischievous and Bufkin lives up to that. However, he’s rather good at heart and often causes minor trouble. Oh, and the game also includes Mr. Toad (love those stories) and Colin. Who’s Colin, you ask? He’s one of the Three Little Pigs. Bigby crashes at his place sometimes and they got past the whole huff and puff and blow your house down incident. These are some weird characters in the world of Fables and I won’t lie, I would love to see them in live-action form.

The interesting part would be seeing these non-human characters act with such human elements to them. They’re the most exotic characters Fables has to offer, but they’re oddly relatable. Now that’s something that can be explored in a show. Speaking of which, how can I forget about Beauty and the Beast? Yes, Fables includes them too. They escaped their world and entered Fabletown as a couple, but Beast goes back and forth with his beast and human form. It’s weird, but the interesting thing about them is watching them struggle with the hardships of marriage. They fight, have make-up sex, and try to work out their problems. As far as realism goes, this is about as real as Fables gets. It’s a common, yet sensitive subject, but it’s one that I believe a show can explore to great lengths.

But hold on, I can’t not talk about The Adversary. He’s the main villain of the series and he is a popular fairy tale character. I’ll just say it, he’s Geppetto from Pinocchio. He carved thousands of wooden soldiers and used them to take over the Fable lands. While he did care about Pinocchio, he was frequently abusive towards him. He’s far from the loving, caring version we’re used to seeing, and that’s why the reveal came as such a shock. To me, it’s actually fun seeing villainous versions of heroic characters, but if I were the show runner, I’d take a rather different approach.

The original idea for The Adversary was not Geppetto, but another beloved folklore character. Any guesses? Well, it was Peter Pan who was supposed to be The Adversary. Oh, yes, the very same. The original concept was for Peter Pan to lure children to his island so that they can be young forever and therefore be forever be under his thrall. He’s a devious kidnapper who brainwashes children and they remain his young slaves forever. Pretty messed up, right? Well, it gets even weirder. Captain Hook is actually not the villain of the story. He was hired to invade Peter Pan’s island to rescue the children and bring them back to their parents. Okay, talk about insane. Not exactly the story you grew up with as a child, right? Personally, I actually like the Peter Pan route better and I do wish they explored that in the comics.

Well, a television series is the perfect opportunity to show that. The whole show would give us something that we love and flip it on it’s head completely. Although it would technically be a fantasy show, there would be a shockingly human element to it. This is why a Fables series would work and it needs to happen soon. In a time where fantasy shows are thriving, Fables needs to be on the list.