Home
Comics
Why The Flash is the Best DC Superhero Ever 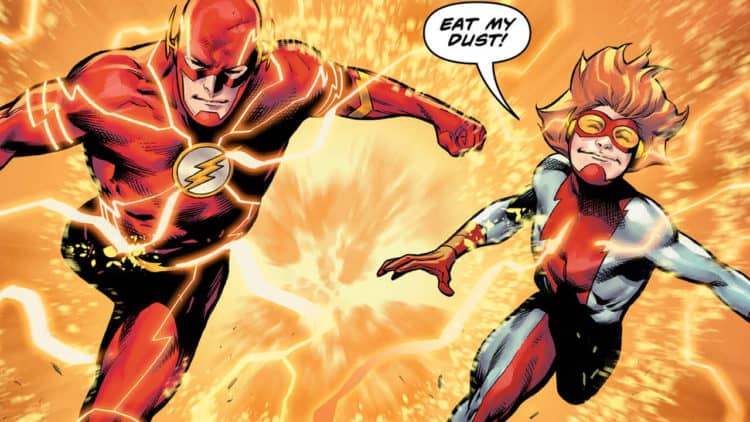 Ever since I began watching The Flash on The CW, Barry Allen has become my favorite superhero of all time; well, next to Spider-Man, of course. After finishing The Flash Season 1 on Netflix, I began to dive headfirst into the comic continuity of The Flash and my love for the character snowballed even further. From his extraordinary powers, to his overwhelming ambition, Barry Allen has done everything in his power to earn the title of the best DC superhero ever. While there have been several various characters that have taken up the mantle of The Flash, such as Wally West, Jay Garrick, Bart Allen, Jesse Chambers, John Fox, Jace Allen, and so many others, I’ll be talking about various iterations of Barry Allen exclusively, though this is mostly about the CW version, as I haven’t caught up to date with the recent Flash comics. So, without further ado, here’s why The Flash is the best (and my favorite) DC superhero ever! (Spoilers for The Flashpoint Paradox ahead)

With the powers of The Flash, Barry Allen can do just about anything. He can run faster than the speed of light, he can throw a (quite literally) Supersonic Punch, he can even go back (and forward) in time by running around the Earth so fast that he opens up a path to another timeline right in front of him. Using his super speed, he can also create time remnants of himself that basically makes it look like he’s in more than one, two, or even fifty places at once! There is very little that The Flash can’t do, except maybe be on time. Ironic, right?

The Flash is one of the most morally sound heroes in the entire DC universe, compared to Batman, Green Arrow, and other heroes that aren’t particularly known for having a strong code of ethics (other than Batman’s “no kill” rule). It seems that one of the job requirements for being able to take on the mantle of The Flash is that you can’t have a single bad bone in your body. Barry Allen continuously makes choices that don’t lead to a single person being hurt or killed, even if it means letting the villain temporarily get away, because he refuses to intentionally put others at risk.

Time and time again, we’ve seen The Flash have to make some incredibly tough choices. Sure, he might not always be the sharpest tool in the shed, and he has made some particularly poor choices in the past, but he has always gone out of his way in an attempt to make the right decision, when put in a position where has has to make the tough call. Take Flashpoint, for example. The CW version of Flashpoint and The Flashpoint Paradox vary quite a bit, but the basic premise stays the same. Barry Allen caused Flashpoint after running back in time and saving his mother from being killed by Eobard Thawne (aka Professor Zoom/Reverse-Flash). However, in doing so, Flashpoint causes an entire ripple of changes throughout the entire world that eventually led to the death of Bruce Wayne, the survival of Thomas and Martha Wayne, where Thomas became Batman and Martha became The Joker after the death of their beloved son, Bruce. It also caused a war between the Atlanteans and the Amazons in which Arthur “Aquaman” Curry and Diana “Wonder Woman” Prince would stop at nothing to end each other. One of the most important effects of Flashpoint is that The Flash no longer existed, because Barry saved his mother, causing him to never become The Flash After witnessing all of these terrible events unfold, and speaking to Thomas Wayne, Barry decides that he needs to regain his lost powers and fix what had been done, because of him. There are plenty of people that would have been able to sit back and idly watch from a distance as the entire world crumbles around them, if it meant their parents were alive and well again, however, Barry Allen could never let this happen. He had to make the hardest decision of all and come to terms with the fact that his mother was killed by Eobard Thawne, and that was how history was supposed to happen.

The Flash is by far my favorite DC superhero of all time, not only because he has insanely powerful abilities, but he also has a fortified mentality that allows him to make some of the hardest decisions that I’ve ever seen. Even if he doesn’t always make the right choice, he always learns from his actions and takes accountability when he makes the wrong choice. While we can only pretend to have superhuman abilities like Barry Allen, we can all take a page out of his book and learn from our mistakes and fortify our mentality to make choices that might be harder to make on our own.