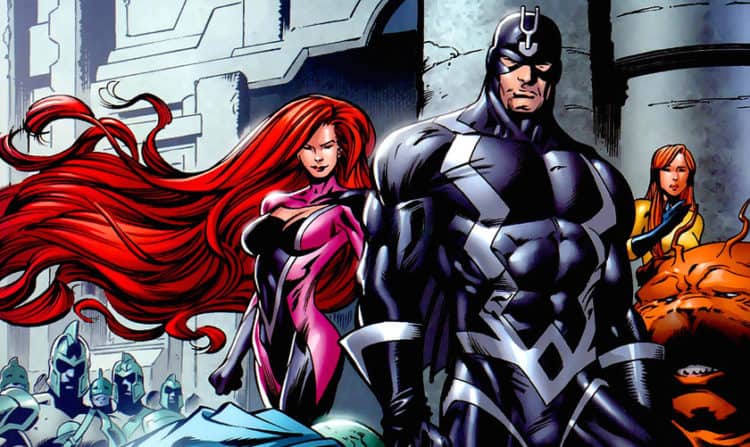 Out of all the Marvel characters, the very underrated Inhumans got the worst deal for the Marvel Cinematic Universe. A little trip down memory lane, back in 2014, Kevin Feige announced a movie for them was coming in 2018. Well, that didn’t happen and then it was postponed for a release date in July of 2019. Guess what? That never happened either. That’s unfortunate, but Marvel found a way to still give us the first live-action debut for the Inhumans. In case anyone forgot, it was the very, very terrible television show on ABC. I’ll admit, I just watched a few minutes of one episode and turned it off. I just couldn’t take it. Apparently, neither could the majority of fans and critics. The Inhumans ABC show is officially the lowest-rated property of the MCU.

Who’s to blame for that? Well, the short answer is behind-the-scenes struggles with Kevin Feige and the very camera-shy CEO of Marvel Entertainment, Ike Perlmutter. The working relationship between Perlmutter and Feige has always been pretty rocky, but apparently Perlmutter was the one pushing for an Inhumans show. He and Feige sparred over how to handle the royal family for a while, but the deal-breaker came in 2015 when Perlmutter wanted to give Robert Downey Jr. the boot. For Feige, that was the last straw and he decided that he should report directly to Alan Horn, the Chairman and CCO of Disney. From that moment on, Marvel was officially under the banner of Disney and not Marvel Entertainment.

That was very unfortunate for the movies, but the shows weren’t so lucky. Acclaimed comic book writer and former Executive Vice President of Marvel Television, Jeph Loeb, still had to answer to Ike Perlmutter. At least he did right up until 2019. But by then, the damage was already done. In 2017, they put out the Inhumans television show on ABC and we… just weren’t having it. It was bad and we have Ike Perlmutter to blame. Mass kudos to Kevin Feige for setting things straight.

Now the show is bad, that’s old news. However, I’m still very curious as to how Feige will plan on bringing them in for future MCU movies. Will he even do it? I would say yes, but don’t expect to see the same cast from the ABC show. The less that we’re reminded of that show, the better. So if Kevin Feige is planning to give the Inhumans another chance for the MCU, what does he have in mind? If he does have them on a future movie slate, I wouldn’t count on seeing them anytime soon. I’m guessing it’s because we’re already getting the Eternals.

As a comic fan, I would’ve welcomed the Inhumans to the MCU five years ago, but after watching Endgame, I don’t see how they would’ve fit in. Maybe their story could’ve worked after the events of Endgame and they didn’t have to interact with the Avengers, but if their movie was released, I feel like it would’ve been shoehorned in. The difference between the Inhumans and most other comic book teams is that they’re a family. On top of that, they’re also considered royalty. Hence, the Inhuman Royal Family title. Their origins stems way back when the Kree and the Skrulls were still at war. The Kree established a station near Earth and discovered sentient life on the planet.

The Kree were intrigued by these beings and began experimenting on them with the hopes of producing a genetically enhanced Inhuman race. Basically, they wanted super soldiers to help them fight the Skrulls. Their experiments were successful, but the Kree feared that their test subjects would eventually attempt to rebel against the Supreme Intelligence. So, they abandoned them and the Inhumans formed a society of their own called Attilan. The Kree experimented on them with the mutagenic Terrigen Mist (they called it Terrigenesis), the substance that gave the Inhumans their powers. Sound familiar? Remember when Captain Marvel was first exposed to the Tesseract in her movie?

I have a strong feeling the Tesseract was used by the Kree to conduct those type of experiments in the past on the Inhumans. I think they exist in the MCU and Captain Marvel has come into contact with them at some point. Now I do think there are some striking similarities between the Inhumans and the Eternals. They are both teams of genetically altered humans (the Celestials are responsible for the Eternals) and are immensely powerful. However, the Inhumans could have a much more significant role for future MCU films.

When I look at the Inhumans now, I think back at a fairly recent Marvel story that really stood out. I’m talking about when they went to war with everyone’s favorite superhero mutant team, the X-Men. To quickly sum it up, the Inhumans detonated a Terrigen bomb in Earth’s atmosphere when Thanos invaded Earth. This caused a Terrigen Cloud and when it passed over anyone who was a descendant of an Inhuman, their powers would begin to develop. The Terrigen Cloud helped create more Inhumans, but it was unfortunately dangerous for mutants. If it passed over them, their mutant genes would be infected and they would eventually die from it. This led to the Inhumans vs. X-Men storyline.

Now that the X-Men are certainly joining the MCU, I think it would be beyond epic to have them fight the Inhumans. Not right away, of course, because I do want to see them fight alongside the Avengers first. Black Bolt and his family, however, were never exactly too eager about fighting with other superheroes. They are a tight-knit group and don’t like getting involved in Earth’s battles. That’s why Captain Marvel (assuming she’s met with them) needs to be the bridge for Earth’s heroes and the intergalactic ones. If their powers originated from the Tesseract, they could’ve educated her on the nature of her powers and how the gene could be in unsuspecting Inhumans on Earth. Their debut could not only introduce another superhero team, but a whole new race as well.

For the record, I’m aware that Agents of Shield has already explored that, but don’t expect the movies to follow that. They’ve largely ignored that show’s continuity and that probably won’t change. However, I’m guessing the origins of the Inhumans will begin with the Ms. Marvel show. Those rumors have been popping up for a while now and if there is some fire to that smoke, it could be interesting. Ms. Marvel has the Inhuman gene and her exposure to the Terrigen Mist is what activated her powers. If the MCU is introducing her, I reckon the Royal Family won’t be too far behind. I predict Ms. Marvel will eventually meet Captain Marvel, her idol, and she’ll take her to meet Black Bolt and his family. They will teach her the history of the Inhumans and might even encourage her to join them on Attilan.

Having the Inhumans debut in the MCU (the right way) could open up several opportunities for some great storylines. They are a new race for the MCU and their presence could really expand the intergalactic boundaries of the universe. Plus, they really need some redemption after that travesty of a show. The only actor I’d bring back is Anson Mount, but he’ll most likely be recast. I’ll be honest, I really want to see Lockjaw the most. Come on, who doesn’t?