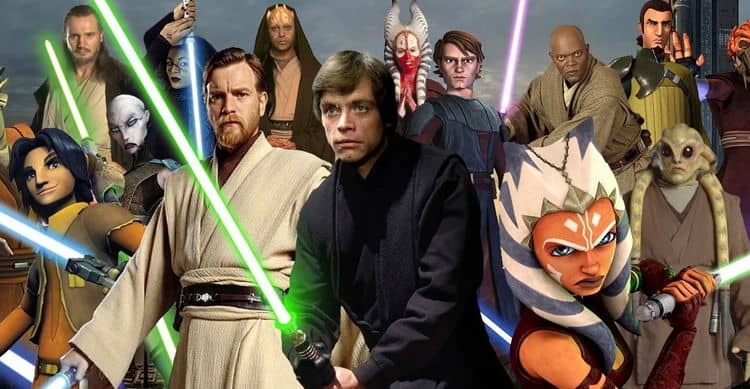 The Jedi are considered to be extinct in the current Star Wars continuity, probably because there’s only Rey. Sure, she’s Paplatine’s granddaughter, but she’s earned the right to be called a Jedi. Will she continue where Luke left off and train a new generation of Jedi? That would be a logical and exciting route because Rey’s story ending as a farmer felt very flat. However, there is a much more critical chapter in the Jedi’s history that takes place before Rey’s time.

That time was a dark time, and the darkest chapter in Jedi history. The main reason why is because that’s when the Jedi Order came to an end. In Revenge of the Sith, Palpatine was successful in destroying the Jedi and decimating the Order. Many Jedi Masters were killed by their own Clone Troopers, but by some miracle, many Jedi survived. Whether by luck or by the sacrifice of another, the baffled Jedi escaped the clutches of Palpatine’s wrath and went into hiding. The war was lost. The Sith have won.

The scattered Jedi had no easy way of contacting each other. Tapping into the force would alert the Sith to their presence and Darth Vader would surely hunt them down. So how did they survive? The best answer would be however they could. Some threw away their lightsabers and abandoned the force, while others became rebels. Shockingly enough, some even lost their way completely and turned to the dark side. It was indeed a dark time, but very interesting to see how the fall of the Order effected them all differently. In Star Wars lore, it is known as The Jedi Purge.

Revenge of the Sith showed the beginning of The Purge, but only the beginning. The Star Wars comics expand on it much further, showing how a handful of Jedi survived the massacre. I won’t be going into the Canon and Legends so much, because both have their own twists on it, but honestly, The Jedi Purge is too important. It offered a lot to the Star Wars universe, especially since it answered so many questions. Were Yoda and Obi-Wan Kenobi the only Jedi to survive Order 66? Did the survivors ever try to strike back? What did they do after the Order fell?

These questions were all answered in multiple novelizations, comics, and even some of the animated shows. Were they satisfying answers? The answer is a definite yes and that is exactly why The Purge deserves a big-screen adaptation. Which character should they focus on? Well, Â the answer varies by a long shot.

Let’s take a look at the most recent Star Wars video game, Star Wars Jedi: Fallen Order. It’s primarily an action adventure game that focuses on a young Padawan named Cal Kestis. The game takes place about five years after Revenge of the Sith and about fourteen years before A New Hope. That means The Purge was still in effect to a major degree and Kestis was a target for the Galactic Empire. The game’s plot involves him avoiding the Empire’s assassin’s while he attempts to complete his training. What was most interesting about this game was that Kestis was never seen before. He was an original character made just for the game.

This would serve a movie well, because no popular Star Wars character is needed to make it work. The main protagonist can be an fresh new face made just for the film and can be a Master, Knight, or Padawan. One of the benefits of having an original character gives the director of the film the chance to expand the universe further and creating new backstories. Is it a risk? Actually no, because the most recent films have been sticking too close to the characters we’ve seen dozens of times.

The Solo movie had Han Solo in it and guess what? It bombed spectacularly. A Star Wars movie with the franchise’s coolest character as the star bombed? Yes, as inconceivable as it is, it’s the truth. Perhaps the absence of Harrison Ford was the biggest factor, but that’s irrelevant now. The Star Wars name alone can draw a crowd and we need more characters we haven’t seen before. A new Jedi who’s name isn’t Yoda or Obi-Wan would be a fine addition to the expanded universe.

I know I’m emphasizing the use of original characters, but the Star Wars comics introduced some interesting characters in need of more development. One of them is A’Sharad Hett, a strong leader of The Clone Wars and a survivor of Order 66. He fled to his home planet of Tatooine and became the self-proclaimed leader of the Tusken Raiders. His actions on Tatooine led to a confrontation with fellow fugitive Obi-Wan, who sensed the dark side growing in him. The two warriors dueled and Obi-Wan cut off one of his arms, causing him to be exiled and become a bounty hunter. Hett didn’t stop there though, as he embraced the dark side of the force, eventually becoming a new Sith Lord called Darth Krayt.

Hett is one of the Jedi who gave into the dark side and joined The Sith. This is one of the most tragic effects of The Purge and it’s something a movie can exploit. Plus, a character like Hett would serve as a fine villain. He was among the handful that survived Order 66, but many others chose a simpler life.

Master Kai Hudorra was one of the Generals of The Clone Wars who survived a direct attack from his Clone Troopers. The sacrifice of another Master and witnessing other Jedi being cut down by Clones broke his morale. He tossed aside his lightsaber and turned away from the force, Â choosing a simpler life by becoming the owner of the Lucky Twi’lek Casino. It was all going well for him until Darth Vader tracked him down and killed him. This is a tragedy of a different kind that The Purge created, causing fugitive Jedi to constantly look over their shoulders because they were being hunted down like dogs.

The amount of possibilities The Jedi Purge can serve for a movie is almost endless. It was one of Star Wars’ darkest eras that involved the early days of The Galactic Empire and the remnants of The Jedi Order. I’m craving it the more I write about it. Just imagine The Fugitive meets Star Wars, only don’t expect Harrison Ford.