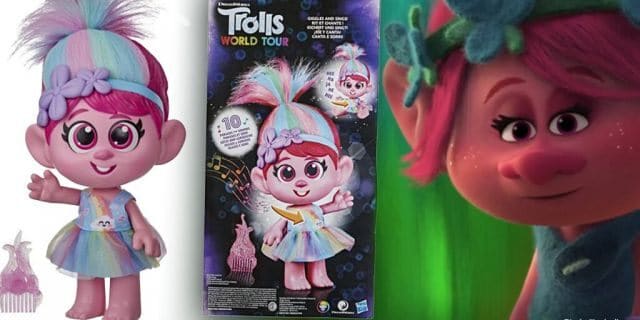 This is just poor planning on the part of the toymakers. Usually, one can look at a toy and hear a complaint and dismiss it as someone being butthurt about something that really doesn’t matter that much, but this time there’s something wrong that really can’t be ignored and passed over since again, it was just a huge design flaw that made a lot of parents mad. Somehow it doesn’t feel that Hasbro really planned to promote sexual abuse by targeting children with a Trolls doll, but why in the world this design was allowed is kind of hard to figure. The reasoning behind it is simple enough, the designers wanted Poppy to make her customary noises, such as giggling and gasping, when she sat down or was placed on her backside by kids while playing with her. This likely hasn’t placated anyone judging by the fact that the petition that was created reached roughly 169,000 thousand signatures and managed to get the dolls pulled with Hasbro stating that they would replace the flawed dolls with another doll of equal value to those that bought them. Some are even going so far as to question what the replacement doll will be like, which leads me to my next point. If this wasn’t done out of sheer malice then it’s likely that people are doing what comes naturally to many individuals unfortunately, they’re overreacting.

Of course, the placement of the button is a problem since those that take it this way are going to think that it’s a sign that Hasbro is promoting pedophilia, as that isn’t a hard jump for anyone to make these days, though one has to wonder just what other leaps people are making. There have been plenty of toys with design flaws that appear sexual to an adult but might fly right by the radar of a child since they don’t typically have the experience to think of things in such a way. Those kids that do may very well have been abused in their lives have been exposed to it, which is saddening and hard to argue against. But when a toy sparks this kind of outrage, righteous or not, it tends to make a lot of people hyper-vigilant and ready to start jumping at shadows since they’ve already found one wrong to right, and are bound to look for more. Even worse, there are those that are already wondering if the coloring of the Trolls dolls has anything to do with misrepresenting transgenderism and other various issues. It doesn’t take much to offend people these days really, and when it comes to children’s toys one can bet that many people would have an absolute heyday when talking through the average toy aisle.

It’s true, kids are very impressionable, and a toy with a button located in the genital region is not a great idea since it might make them think that the touching of one’s privates to elicit a noise is normal behavior. This is a big design flaw that Hasbro has acknowledged upon being called out, and they have taken action to pull the dolls, but the general feeling is that people are still angry and will be likely to start seeking out other problems if they haven’t already with other toys. Unfortunately, that’s what people do these days, sometimes under the guise of protecting kids, which is noble enough when it’s real, and at other times protecting society from itself, or so they’ll say. People want to be professional victims or point out how society is victimizing others, which is why things such as this gain such traction with so many individuals. They’ll want to be acknowledged as being ‘brave’, ‘courageous’, or somehow ‘strong’ for standing up for others. It’s a kids’ toy. It was a poor design, and it was taken off the shelves. Cut the four-alarm panic and let the story die off, especially since up until now Trolls has been a bit problematic with some people since it looks like one massive acid trip, but it’s been otherwise inoffensive to a lot of people. Does anyone remember the Ren and Stimpy doll that farted when it was squeezed? How about the baby dolls that actually peed when they were given water? Even better, how about pregnant Barbie? These were designs that were completed, marketed, and sold as-is ON PURPOSE, and people thought they were quirky and odd but still acceptable.

The point is that Hasbro admitted they goofed on this one, and it is a design flaw that doesn’t fly in an era when sexual abuse is a very big issue and has been seen to ruin many lives worldwide. But the toy is off the shelves people, let it go. Focus your ire on something else, preferably something that’s a little tougher to tackle and change with bullying tactics.