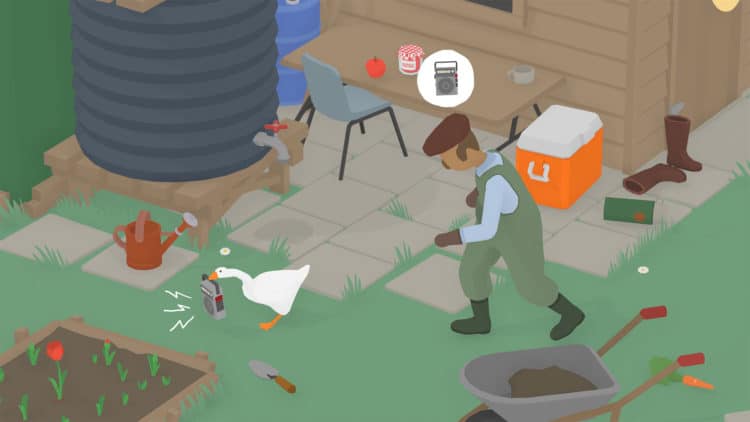 If you’re a gamer and you haven’t checked out the Untitled Goose Game (the actual title), you’ve been missing out. Yes, I realize the very title of the game is unusual. It even sounds uncreative, but I’ll admit that it surprised the daylights out of me. What is it about you ask? Well, as the title suggest, it involves a goose. Why would anyone want to play a goose? What possible fun can anyone get out of playing as a regular goose? The answer is a lot.

The game is labeled as a puzzle-stealth video game and if you’re wondering how that works when you play as a goose, then you might want to allow me to explain. Untitled Goose Game allows you to take control of a goose and your objective is to literally annoy people. Geese aren’t the most beloved creatures in real life and this game reminds us of that fact. They honk a lot and have a tendency to get in the way, much like the goose in the video game. Throughout the game, you can honk and spread your wings whenever you want, and the sound of its feet flapping won’t escape your head. There’s nothing special about this goose that you play, it’s just a normal goose.

On paper, this video game sounds very silly and boring. However, I watched the trailers, read some reviews, and decided to be fair and give it a shot. I couldn’t find a physical copy of the game anywhere, so I purchased a PlayStation Network card and bought it through the PlayStation Store. It was fairly cheap (twenty bucks) but since gaming can be rather time-consuming, I was a bit worried about how long it would take me to complete it. Reviews that I read claimed it would only take two or three hours to beat. I figured I could spare a few hours out of my day to have some fun and fun is what I had.

The setting of Untitled Goose Game is a small, English village with a handful of inhabitants. The objective of the goose is to bother these inhabitants as much as possible. This includes causing a groundskeeper to accidentally smash his own finger with a hammer, to making an artist break her fancy vase, to relentlessly bullying a nerdy teenager. Yeah, this is one bad goose, but I will not lie, I had loads of fun playing as it.

The game isn’t all about being a major nuisance to the peaceful villagers though. I stated earlier how the game is about stealth and solving puzzles, because that’s exactly what the goose does. When it enters an area, you have to hide it from the people, because they will have enough eventually. You can have the goose honk in front of people to startle them, but some will attempt to chase you. It’s these people that you have to focus on, because not only will you annoy them, but you will get revenge on them.

When enter the shopping area of a protective shopkeeper, she’ll go for her broom and force you out. That’s okay, just use the goose’s beak to grab the other end and play tug of war with her until she breaks it. You can then lock her in her own house and steal some goodies from her shop. This is one mischievous little goose, but it doesn’t stop there.

The last major area is a restaurant and there is a burly man acting as a bouncer. If he sees you enter his territory, he will chase you out. Even if you don’t bother anyone, he’ll still come after you. He’s a jerk, but you eventually get your revenge when you drop a bucket on his head. He’ll stumble until he falls on a crate filled with tomatoes, ruining his pants. Being a nuisance in a video game has never felt sweeter.

How many other video games are like this? Not very many, but part of the fun lies in its challenges. While the goose has to rely on stealth, it must also solve numerous puzzles. Like every other video game, it gives you a list of objectives you must complete. If the goose wants to really annoy people, it must get really creative. A good example of this is when it must turn two neighbors against each other. How can you make one neighbor spill his coffee by using one of the other neighbor’s possessions? How can you make that same neighbor accidentally break something that belongs to the other neighbor? These are the types of puzzles you must help the goose solve and when you do, the results are hilarious.

Untitled Goose Game just gives gamers that secret guilty pleasure we won’t admit we love. Well, maybe some of us admit we love it, but this game is just different. You don’t play a antihero who goes on killing sprees with superpowers. In fact, the goose of this game is pretty much the villain (kind of). By the end of the game, the goose steals a golden egg and takes it back to his nest just to add it to his pile of other broken golden eggs. If you want to feel more like a snobby goose, just give a victorious honk at the end. It actually feels satisfying.

The developers intended Untitled Goose Game to be similar to the games from the Hitman series. Sure, you don’t kill anyone in creative ways, but you do annoy the heck out of people in creative ways. It’s basically a watered down version of Hitman in terms of stealth mechanics. It’s a test of puzzle-solving skills and patience. If you’re a gamer and enjoy those elements in a game, then you’ll have fun with this game.

The main element that separates this game from others is primarily the humor. It has a splash of dark humor in it and the goose exploits that. Carrying out his acts is just fun to watch and you’ll be laughing throughout the whole thing. How many video games can make you laugh? For the gamers that like solving puzzles and have a bit of a dark sense of humor, Untitled Goose Game is right for you. Honk, honk.