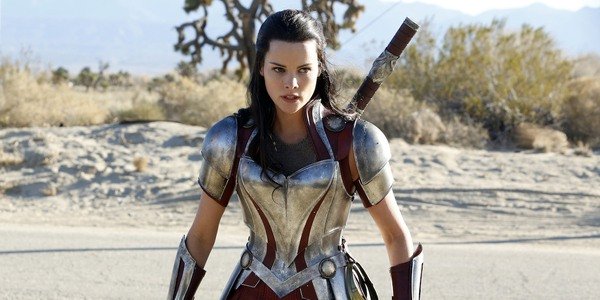 When it comes Sif, the length of her tale in Norse mythology isn’t as long as many other gods, but she has said to be the goddess of the harvest and she is married to Thor, who is about as faithful as the average Hollywood celebrity since it’s been written that he’s had several children by others throughout his long history. But there’s little to no word of how fierce of a warrior Sif is, though it does sound more impressive that Thor would be attracted to someone that’s just as capable in a fight as he is. Unfortunately for the MCU Sif, Thor is more smitten with a mortal than he is her, and as a result, she looks a bit forlorn at times considering that she might be wondering what a mortal woman has that she doesn’t when it comes to attracting the man she cares so much about. Despite that, Sif has continued to be a formidable force in the MCU when she shows up, though it’s very likely that a solo movie might not be in the works right away. Even if it is, the likelihood that it would be a Disney+ special feature feels more accurate than anything when making a prediction about her solo outing.

The truth is that Sif, in the MCU, is a definite badass, she doesn’t get nearly enough credit or attention since she doesn’t possess the power that Thor does and yes, she’s looked down upon a bit since, in a warrior culture where so many are called to the service of Asgard, she’s another soldier that’s caught up in the mix. She’s definitely tough and can handle herself against pretty much anything, but giving her a solo movie needs to have a reason, and it’s not hard to think that such a reason might be easy enough to concoct since Sif is a character that’s been around for quite some time and has been just as tough throughout everything when it comes to her place in Thor’s overall story. To say that Norse mythology has been twisted and otherwise turned around for the sake of Marvel’s narrative is easy and truthful since the Thor of Norse mythology was redhaired and had a beard and mustache instead of being blond and clean-shaven all the time. Plus, he tended to need a belt and gloves to handle his famed hammer, Mjolnir.

In Norse mythology, Sif isn’t mentioned quite as much and she’s certainly not mentioned as a warrior, though she does have a history with Loki, who cut her hair off and had to eventually get Eitri, one of the dwarves, to make her a new head of hair. It’s true, the Prose and Poetic Eddas and the many stories that come from Norse mythology are kind of odd, but they’re also kind of interesting to read, even if Marvel kind of dumped a lot of the source material along the way to get what they wanted. Sif has usually been seen as a warrior woman that is obviously not a valkyrie but is definitely on par with the ferocious warriors. It’s even been mentioned that since Valkyrie is now king of Asgard, having been made so by Thor at the end of Endgame, it’s likely that the king will need a queen, and it could be possible that Sif will at least show up for the next Thor movie. But taking on her own solo might be an interesting bid to see just where she would have been when the dreaded Snap happened during Infinity War. One has to remember that the Warriors Three, Hogun, Fandral, and Volstagg, had already been killed by Hela before the Snap even happened, so bringing them back would kind of be a slap in the face to Thor: Ragnarok. But Sif wasn’t present in the movie as the actress had another project going at that time.

So it is safe to think that Sif was somewhere in the galaxy waiting to be recalled or to come home, and it’s very likely that a story could be made from this, though whether it would make its way directly to streaming or to the big screen is hard to say since, at this point in time, Sif hasn’t really been allowed to distinguish herself when it comes to the MCU. She’s been a part of someone else’s story and has been a supporting character, nothing more. But giving her the ability to take on her own movie might be kind of interesting since this character has more to her than people might think, as in the comics she had an entire backstory and a definite flair that was all her own. But in Thor: Love and Thunder, it would be interesting to see what might happen if she returned to be Valkryie’s queen, or at least her ally, especially with Jane Foster taking on the mantle of Thor at some point.