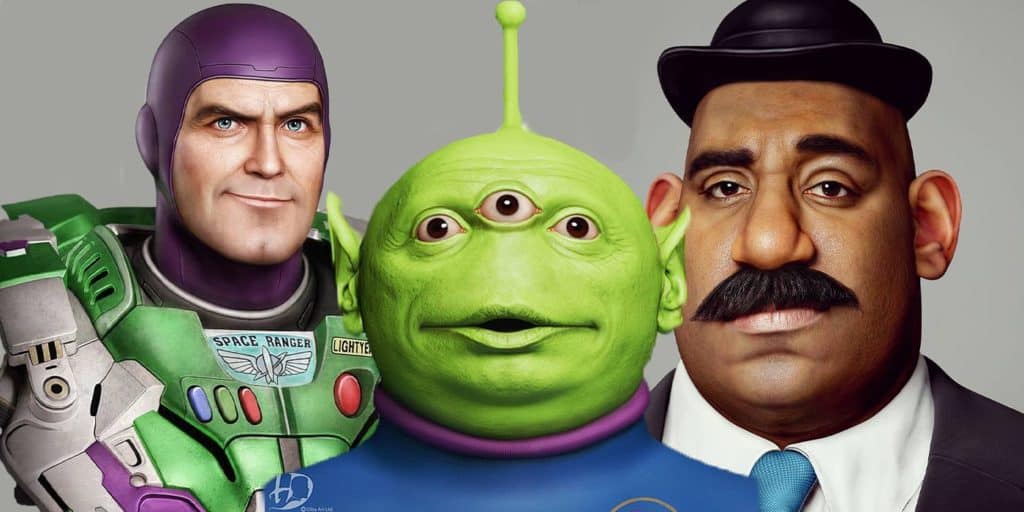 A live-action/CGI hybrid might be a good compromise for a movie such as Toy Story since the artwork for a supposed live-action Toy Story is enough to give anyone shivers down the spine since it looks a little creepy. Plus, it would make a lot more sense to incorporate CGI for a live-action movie simply because making the toys look TOO life-like would likely turn a lot of people off given that these are kids’ toys that are being displayed. There’s also the idea that Toy Story might not even need a live-action remake since the tale has been widely accepted as it is and over the years it’s evolved enough that people haven’t really given much thought to going back to it. But as anyone can guess when it comes to remaking and rebooting movies, there’s always bound to be someone that’s going to wonder what it would be like to do this, or that, or the other thing, or make Toy Story into a live-action movie.

Hopefully anyone that does ask that has taken into consideration these pictures and how freaky it would really be if a kid’s toys looked as though they could come to life at any second. There have been short films and cartoons made using the Toy Story idea and of course, Buzz Lightyear did get his own cartoon, but animation and Toy Story tend to go together so well that it feels as though people shouldn’t be rocking the boat at this point and should perhaps be content with what’s been given. That’s only going to happen for so long though, as anyone should be able to guess that an idea might come together that will convince someone at Pixar that this should happen and that it should one of the next big live-action projects.

Another thing to think about is the condition of Sid’s toys and what kind of nightmares those might bring about if put into a live-action movie. It was scary enough for some kids to see what happened in an animated movie since Sid was particularly nasty to some of his toys, but in real life, it would be horrendous and likely something that people would be talking about for a while. Keeping Toy Story animated sounds like the best move even if it’s not bound to happen in the coming future since there’s bound to be someone that says “I can do that” in regards to making a live-action movie in which the toys do look a little too realistic.

This is definitely one of those times when opinions would vary since some folks might go ahead and say that it wouldn’t be an issue and that others should stop being so oversensitive to something that’s not even an issue, while others might state that it’s just too creepy for a kids movie. That last statement is kind of funny since those of us that grew up in the 70s and 80s managed to see a few truly terrifying things on TV as kids and it was meant for our entertainment. Plus, we were also those that were still growing up with some of the grimmest fairy tales and stories that had been passed around since the old days, so it’s fair to say that what we were exposed to make what we’re talking about today rather tame. The idea still stands though, since creating a live-action version of Toy Story still feels like something that should probably be left alone even though it won’t be left alone forever most likely.

The live-action ideas that are currently in the mix and might not be seen for a while are no doubt plentiful since they’ve been successful enough for studios to think that this might be something that could be sustainable and might actually be what people want. It’s true that a few live-action movies that were once animated have done quite well, but those have usually paid attention to the source material and only changed what was needed in accordance with the story and to build things up a bit. Even then, people tend to wonder if the additions are needed or if they could have been left out. The look of a live-action movie usually throws the reality of an animated character into stark relief, and it’s easy to think that some people don’t expect what their favorite characters are really going to look like once they’re brought to life in such a manner. The appearance of a living being is far different than that of an animated individual as many people are figuring out, so Toy Story might be better off taking the hybrid approach in order to keep the fans happy and avoid making the mistake of needing EVERYTHING to look like live-action. Just imagine what Slinky-Dog would be like, gah.