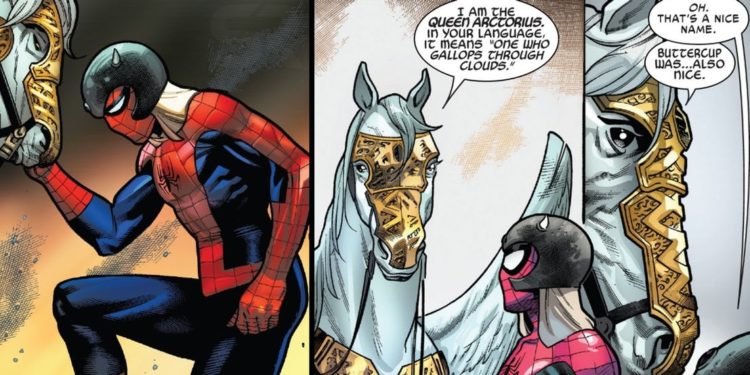 You can’t blame Andrew Dyce from ScreenRant or anyone other than the writers for this one, but it would appear that Spider-Man has taken a page right out of Robert Redford’s playbook and become a different kind of horse whisperer. In all honesty the ‘horse’ is a pegasus that was ridden by the Valkyries and has a name and her own level of intelligence since she’s a queen among her kind. Plus, the joke that was made with Wolverine simply plopping an unknown helmet on his head after telling him it was magical was kind of funny, but it turned out to be meaningful as well. Obviously the helmet did carry some magical qualities since it allowed Spidey to talk with Queen Arctorius, but only in a manner that could be understood between the two of them. When the focus pulls back out to show the others that he joined the fight with it can be seen that they’re looking on as Peter whinnies and neighs his way through what appears to be a conversation in a very Dr. Dolittle fashion.

To be fair it was a part of a story arc that, according to Tucker Chet Marcus of Marvel.com, included an array of heroes that were sent to Thor’s rescue when he was trapped on Jotunheim. Spidey’s whole angle with talking to the winged horse wasn’t exactly a power that he’s bound to keep once he took the helmet off, but it was still a development in the story that had a lot of people scratching their heads and some dropping their jaws in amazement. It’s not exactly something we might ever see in a movie unless it’s animated and makes at least a little bit of sense, but it’s something that in the comics is allowed since the panels of a comic book are meant to be taken up with the most fantastical and sometimes nonsensical material that can be found. That being said some folks actually kind of liked it since the respect towards the fallen after the battle was meant to be extended to the horses and the idea that they were warriors as well is something that a lot of people can get behind since horses have been used in warfare for so long that some of them seemed bred to it at one point, and likely were.

In the comics though talking animals might not be against the norm but there are times when it becomes kind of cheesy and even overdone to the point of being corny. This brings to mind the giant eagles in the Lord of the Rings and Hobbit trilogies. In the cartoons the eagles did speak, which was kind of creepy and a little off-putting despite being just fine for a cartoon. But thankfully in the live action movie they acted more like eagles and only shrieked occasionally while going about the business of saving Gandalf and the others. There’s nothing bad about an animal talking or being seen as intelligent in a comic book but making the assumption that a character will be able to converse with them in the same language is sometimes a little hard to really consider worthy of the panel. In moments of delusion and madness it might be understandable, and of course magical items that allow this could be explained away, but overall it’s just something that doesn’t seem to fit with Spider-Man’s character since it’s not a power that we could really see him having whether he had the helmet on or not.

Besides this fact is the reality that Spider-Man already has a well-established power set and adding to it just seems to be a little too over the top, especially when it’s one that has such a conditional limitation to it. In fact you could call this a very D&D-based power since like many magical items within the roleplaying game this helmet is something that grants its wearer an ability that might come in handy one out of ten to fifteen times in their entire life, and only when they have the right situation that calls for it. The main reason for not liking this ‘power’ is that it seems kind of silly despite the fact that the writers obviously wanted to roll with it and see where it would go. Obviously some people liked it but it’s just as obvious that a lot of people rolled their eyes and said ‘whatever’. After all, no one is going to like every idea that comes along and not every idea is going to be what some people think of as necessary or even feasible. But until people start writing their own stories the criticism means next to nothing. It’s true, this is a hard power to really get used to, but thankfully it’s not one that would stick with him.