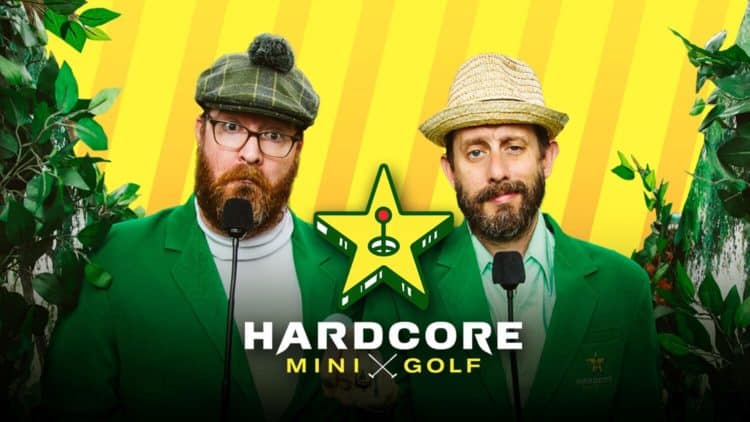 It’s like someone took Happy Gilmore, putt putt mini golf, the WWE, and Comic-Con and tossed them into a blender to see what would come out, and voila, we have Hardcore Mini Golf.Â  The game looks like something that one might want to do drunk, or maybe not since tempers appear to flare every now and then. The fun looks like it’s not bound to stop unless a person simply gets so bent out of shape that they can’t see the game for what it is. Come on, anyone that’s played a competitive game like this knows that there’s usually someone that comes along and can’t take a hint that it’s just a game and will get super-serious and eventually super-pissed because things aren’t going their way. This just looks like a good time with mini golf and costumes while trying to outfox the other people around you. This is definitely a show that’s not going to take itself too seriously and will be there just for the sheer entertainment of it, not to mention the chance to see who gets that coveted green jacket at the end. This is more of what TV needs really, shows that are bound to just pop up and be there to entertain the people without making them think too much about morality and the idea that they’re trying to make some political or social point with their content. We get enough politics and noise from newscasts that we have to sort through, the hope is that our entertainment wouldn’t be trying to force it down our throats so often.

But it’s going to be crazy, have no doubts about that. One guy appears to be channeling his inner-Macho Man while another looks like he’s straight out of the 60s or 70s. Then there’s the cardboard robot that looks like a Halloween reject from the 80s, along with a woman dressed as though she came from the set of Mary Poppins via the nearest chimney. It does look like it would be fun just to be there and witness the show being made and it could be a great deal of amusement since mini golf is at times a very competitive game and can bring out the best, worst, or even goofiest in anyone. If you’ve ever played the game then you know how irritating and frustrating but also fun it can be since some of the obstacles appear to be designed just to test the patience of the players. There are those courses that make a person think outside of the box and tend to really get on the nerves of several people since they can’t think of the angles or the possibility of how such things would work. Of course there are also holes in which the desired reaction is pure frustration since even getting the ball in the hole doesn’t guarantee it’s going to stay there, as has been seen with some mini golf courses. There are those times when it feels that the designers of the course are bitter, rejected individuals that just want to make people suffer in any way they can, or are just flat out nuts and are out to make people just as crazy as they are.

Looking at the course it’s not bound to be too tough, but looking at how the game is played the difficulty level might be kicked up a few dozen notches just to insure that the show is going to be as funny as possible and as challenging as mini golf can possibly be. It’s almost as if a sadist visited a mini golf course and wondered how they could possibly bring even more difficulty to the course and in the process make it entertaining. Sometimes the most devious minds really do come up with the greatest ideas apparently since this is something that may or may not catch on but is still bound to be pretty funny since it looks like it could be a show that people will talk about for a little while at least. Normally it feels as though mini golf is just a step or two above bowling in the estimation of many people that might find it to be a kind of low-brow, family thing that isn’t meant to be taken seriously. But really, when you get into it and start having fun with the game it’s a great way to just kick back and relax, at least until you start missing shots that look insanely easy but are able to miss because of deceptive courses that slant to one side or another. Deborah Hartz-Seeley of The Coastal Star has more to say on the topic.

All in all this looks like it could be a fun and extremely interesting show, so it might be worth turning on the TV in an attempt to catch it and get a few well-deserved chuckles.