Home
Entertainment
Why We Need a Movie Adaptation of Kathy Rain 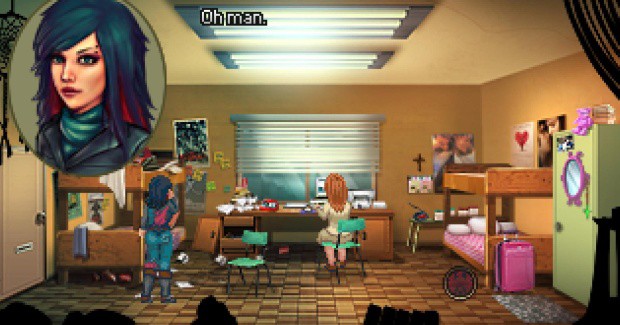 It’s in the spirit of bringing back a piece of the 90s so perhaps people might like seeing Kathy Rain brought into the cinematic arena to see if her story would be able to hold water. No, there’s no pun intended there. But the detective story, that was released in 2016, which is essentially the point of this character might actually be something that people would get into and be able to vibe with since it does take players back to a time when technology wasn’t quite as advanced, which could offer up a bit of challenge to some. Detective games are usually pretty interesting since some people pick up on them quickly and have little to no issue moving through each task, while others become stymied and have to sit and go over everything trying to figure what they’d missed. But Kathy Rain, despite being one among many games, is one of those that was fun simply because it’s pretty raw when it comes to the language and the interactions between the characters, and despite still being a computer game it deals with the idea of Kathy coming home to attend her grandfather’s funeral, only to get drawn into a mystery where the likelihood of being locked up for one thing or another is a certainty at times, and having to deal with real-life issues in the game is also something that players have to expect. In effect, it’s one of the more realistic games of its time and to be fair, it does feel as though it’s been buried as games move forward so quickly and don’t always take into account that the story might be something that people really enjoy. It would be great to see another version of this game come out since it’s likely that it could be redone and given a serious facelift that might make it just as attractive to gamers of today. But making it into a movie feels as though it would be kind of simple and would require something extra that would carry it even further.

Detective stories can be kind of hit and miss since a lot of them tend to follow a very set formula that eventually makes them all blur together as the same elements are used time and time again in order to create a story that’s supposed to be unique but ends up becoming too much like a movie that was just released. If Kathy Rain was kept back in the 90s as a movie it might be a little more interesting simply because the technology was a little more limited, society still had different views of women like Kathy, and it’s very possible that it would stand out a little more if this was the plan. That’s a big ‘if’ though since to be honest, sometimes luck can turn on a dime and someone might notice a story like Kathy Rain and try to run with it, while at other times the game might get a glance and a nod from those that remember it coming out several years ago but don’t really want to give it the time of day. It’s rough when one thinks of all the work that went into this game and the time and effort that was spent trying to get it to those that wanted to play. But the fact is that the competition that arises when deciding which ideas to make into movies and which to leave behind is pretty fierce, and it’s also heavily dependent on what’s popular at any given time since if fantasy and science fiction is what’s really hot in the market then a detective story might not fly as well. Trends are given a great deal of attention when it comes to movies since the almighty dollar is what’s driving the ideas to be discovered, developed, and turned into movies and TV shows that people will want to watch.

The question is whether or not Kathy Rain would be able to thrive as a movie, or if she might need to be a limited series with the possible option of becoming a TV show since to be fair, this idea does sound as though it could expand and move forward if given the proper attention and treatment. It might take a bit of effort to get this noticed and get it out where people can see it, but it does feel like something that might be worth the effort if it could be marketed to those that enjoy a good detective story. In fact, it might even be popular with the type of crowd that finds The Girl With the Dragon Tattoo to be one of their favorite movies. If nothing else, it would make for an interesting movie for those that remember the game and would want to see it taken a little further.