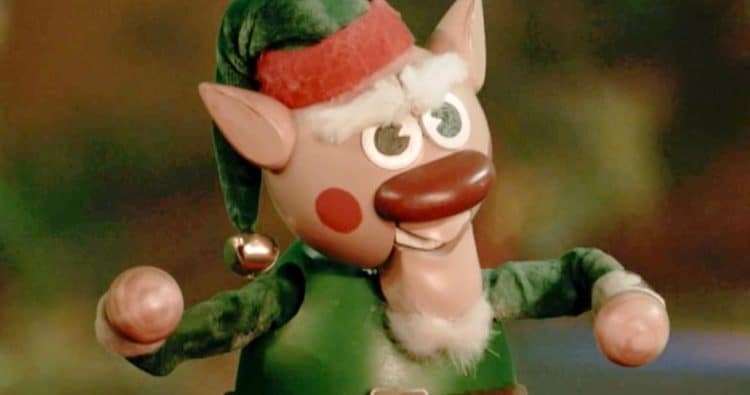 Don’t you just hate it when your toys tell you to wreck stuff and then decide to go quiet when you’re about to get in trouble? Honestly, it’s the pits, and it’s enough to make a person want to use some of those toys as kindling, but somehow this movie makes it feel as though that might be a bad idea since there’s no idea how many other ‘accomplices’ the toys might have. There’s no doubt that Toys of Terror is bound to be just as laughable as it is terrifying, but the idea behind it is one that a lot of people are bound to find creepy as hell since the whole thing about movies featuring toys that have a dark side is enough to get to just about any parent that has a vivid imagination. The story follows a family that has just moved into a creepy old home that the parents are going to renovate, and while they’re focused on that aspect, the kids decide to roam the house and end up finding a box full of toys in the attic. Not a problem, right? The only problem here is that the toys manage to come to life and start showing their dark side as is seen in the trailer.

Movies featuring toys that talk and move on their own aren’t always creepy since otherwise Toy Story would be a straight-up horror movie and other titles such as Small Soldiers and the like would have been in dire need of an R rating at some point. But actual horror movies featuring toys that talk and can walk around and do various things that aren’t exactly nice have been pretty creepy for quite a while now. Does anyone remember The Puppetmaster movies? How about Dolls? Or even better, how about Child’s Play? When toys come to life in horror movies it’s not typically a good thing since for one reason or another they decide to go homicidal and kill pretty much anyone that knows about them or that’s in their path. It does sound as though this movie will be following that same theme and yet it’s not known at this time just why they were left in the trunk where they were found or why they were left in the house. Of course, to some people, they might have appeared to be just toys that didn’t require a lot of attention, but when they ‘wake up’ and start interacting with the kids it sounds like things go from strange to terrifying in a very short time.

There are a lot of answers to the ‘why’ of this since using toys in a horror movie is a popular habit and it’s one that has the effect of making a lot of people give odd looks to the toys they have in their home if there are any. Some folks have a seriously tough time trusting any inanimate toy after watching one movie or another since they don’t want to risk the idea that reality might just follow along in the movie’s footsteps. Silly as that might sound there are plenty of people that might tell you that this is right on the money. Toys of Terror is even worse since just looking at a couple of the toys so far it would appear that one of them is a monkey with that same fierce countenance that has been used in several movies, while the other is a wooden elf with bushy white eyebrows and a very impish-looking grin that could hide any number of psychotic ideas. Despite being Christmas-themed, this movie looks as though it’s going to full steam ahead with the scare tactics and might even start off slow and build up to a sudden crescendo that might have some people gripping their sofas and chairs a little tighter since the trailer is kind awkward and makes one feel as though the toys are little more than tricksters that are there to get the kids in trouble. Things are going to get even worse no doubt since toys in horror movies have a serious reputation for starting out cute and mischievous and getting continually violent until things have gone way beyond playtime.

With all that being said, the presence of a horror movie during the Christmas season does manage to break up the monotony a bit since there’s only so much cuteness and Hallmark-laden sweetness that some folks can take. That’s when it’s necessary to sit down and enjoy a movie that might have a different view of the holidays and will smash one’s sensibilities and twist them a bit until they’re ready to go back to love stories and tales of Old Saint Nick.