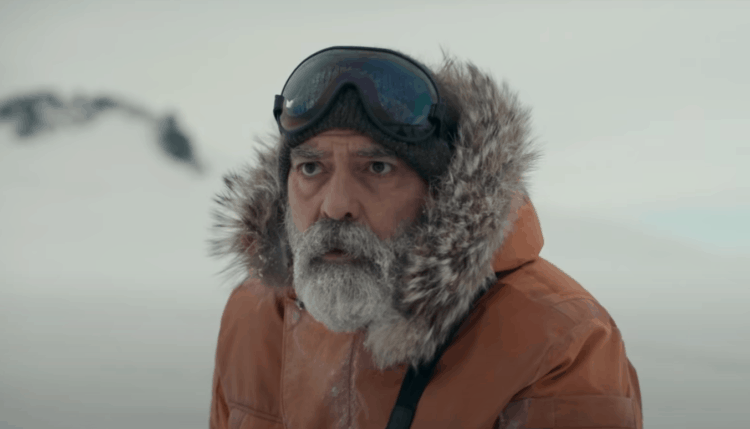 It’s not entirely accurate to say that post-apocalyptic movies are on the rise again, but it does feel safe to state that movies with a very meaningful conflict have been a big part of this year and have been given a great deal of attention, or as much as people can give at this moment since so much has been going on. In this George Clooney-directed thriller it would appear that the earth has become an uninhabitable ball of ice where survival is nearly impossible and the attempt to find a world that can be utilized as a means of helping the human race survive is the secondary or ancillary goal while the main goal is for Clooney and his young charge, Iris, to reach another outpost that will allow them to speak to a group of human beings in space in order to inform them of the fall of humanity. In a big way, this is Clooney’s attempt to showcase the direction that many people believe the world might be headed thanks to climate change, and it’s likely going to be taken up by some as a way to express that many things need to change in order to prevent the future that’s been laid out in film from happening.

There are plenty of people that would take Clooney’s stance on the world and the idea that things have been building up to a crescendo that might be our end for quite a while. To many of those individuals, a lot of folks would raise an eyebrow and say ‘duh’. Without going too far into a philosophical or technical debate, humanity has been quite skilled at causing its own demise for some time, be it due to theological, moral, ethical, or simply practical reasons such has resources, survival, power, or anything else that can be thought up. The human race is seen as the most divisive issue that has ever lived upon the face of the earth as being our own demise isn’t enough for some folks, since many believe that we’re bound to ruin a world that was just fine without us, but was likely going to expire at one point regardless of our presence. Many folks forget to mention that humanity is just as impermanent to this world as anything and that the earth has been through far more than humans could ever do to it, no matter if someone deliberately drilled a hole to the core (good luck with that) and fired off every nuclear warhead they could find. Yes, that would probably do a significant amount of damage, but humans are good at constructing their own end, and it’s hubris that makes people think that our species will bring about the end of the world.

And if by some dark miracle we manage that, the world will go on at some point, or it will break up and life will continue in some other fashion elsewhere. Big picture people aren’t often appreciated no matter how some say they care about the grand design, since far too often they don’t sweat the small stuff that many people fret over. The movie is bound to be one that will remind many people of the dangers of climate change and why humanity is flawed and why we have virtues worth saving and so on and so forth, but as with any other global disaster movie that ends in the downfall of humanity, it’s going to be very likely that it will end with a note of hope that humans will change their way after what they see and will learn how to respect their world a little better. No offense to Clooney, but people are going to take this as entertainment, another addition to the overall story of humanity that has been ongoing for so long and another footnote in a much larger chapter that has been created to house the scope of humanity’s belief that we’re far more important to the world, to reality, than we want to accept. Like it or not, the quote “All the world’s a stage…” is entirely accurate, and people will play many parts before the final act is done. Accepting this on a very final and meaningful level is something that many people claim they can do, but the moment their belief or their resolve is challenged, many will fall back into the habit of believing that they are far more important than they truly are.

The importance of humanity is something that matters to the species, and not much else. Like it or not, the world will continue to turn, the fading light from far off stars will still be seen, and life will, in some way, continue to exist long after we’re gone. Movies such as this are still important and still entertaining, but beyond that, they’re another cry into the void that may or may not go unnoticed.