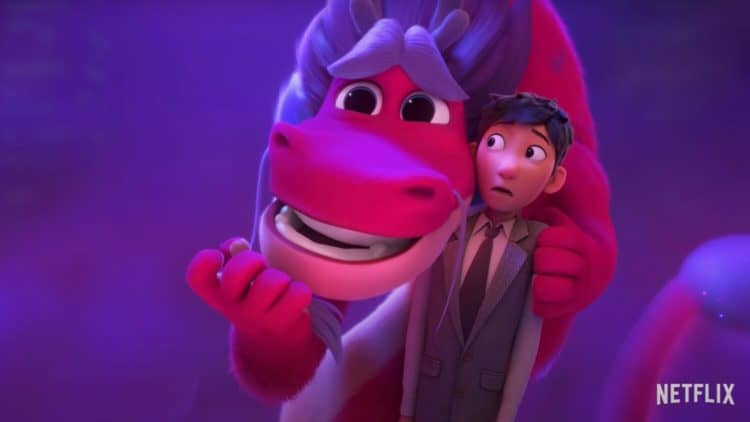 Right off the bat, this looks like an adaptation of Aladdin from a different time period and region of the world since the Genie has become a Wish Dragon, and the area is no longer a kingdom in the desert, but a cityscape where a young man who doesn’t have the means he needs wants to get back in touch with a young woman that he was friends with long ago. Stop me if I’m wrong, but there are even moments in the trailer that track back to Aladdin since the dragon takes action without a wish being made and even lays out rules for the protagonist such as the fact that he can’t make anyone fall in love. It’s not a condemnation you’re reading, simply an observation, since there are differences to be noted, such as the fact that the dragon is coming out of a teapot that he’s been in for a thousand years or more and that, well, he’s a dragon. It does feel as though some folks will decide to call the idea a horrible stereotype as they’ll likely label the whole thing as trouble since dragons, people of Asian descent, teapots, and so on and so forth, are bound to be seen as huge stereotypes that almost make this movie feel like a giant dare to the more ‘woke’ parts of society, especially given everything that’s gone down over the past few years. But in a way, it’s kind of fun since it makes a case for having a similar legend in different countries that might not be too different than what we’ve already seen. Perhaps in Russia, we’d see a big, bear-like genie pop out of a nesting doll or a tea kettle or something. It’s worth thinking about really since it could even lead to an idea of how there might be a type of wish fulfillment department in some far-off fantasy land where figures of all types coordinate and get together to figure out how to fulfill the wishes of humanity. It’s an odd idea really, but kind of interesting.

Anyway, getting back to the idea at hand, one can easily think that this will be kind of a fun movie since while there are a lot of similarities to other movies that have taken on this idea there are just enough differences to make it worth it since the fact that it’s set in the present, or at least it looks that way, could alter the legend quite a bit. From a kid’s perspective, this could be a lot of fun and it could be something that a kid would be highly interested in since dragons are still a versatile bunch of creatures and as it’s been seen, they take on very different appearances depending on what they’re being used for. For instance, Raya and the Last Dragon made the dragons look just as fuzzy and friendly-looking as the Wish Dragon in this movie looks, meaning that it’s definitely family-friendly and not as prone to upsetting anyone based on the content that’s bound to be shown in the movie. Plugging a dragon such as was seen in Harry Potter or even in How to Train Your Dragon might be a little different, or not. It’s hard to say since some kids can watch adult horror movies and not be fazed and some get frightened by something as innocent as a Care Bear. No joke, some kids don’t like the colorful bunch that shoots various rays from their tummies.

One thing about this dragon that’s pretty easy to notice at the moment is that he does have a bit of an attitude that the Genie in Aladdin didn’t have for one reason or another, but being stuck in a teapot for so long might do that to anyone. Still, the overall attitude appears to match the current time period in which the dragon finds himself, but the whole idea of treating his new master like a commoner, or a ‘street rat’ appears to make the dragon a bit haughty as he tries to convince the kid to make his wishes and get things over with. From the start, it does feel as though this movie is going to be something that people might need to get into, but it’s also possible that they’ll find enough to like that will keep their interest for long enough to see what the movie is all about. It does feel as though the female lead in this movie is going to have parents that might be a little demanding, but that they’ll also be a little more understanding. We won’t know much else until the movie is released this coming June. The chances feel pretty good that people will enjoy the story, but don’t be surprised at some of the criticisms.