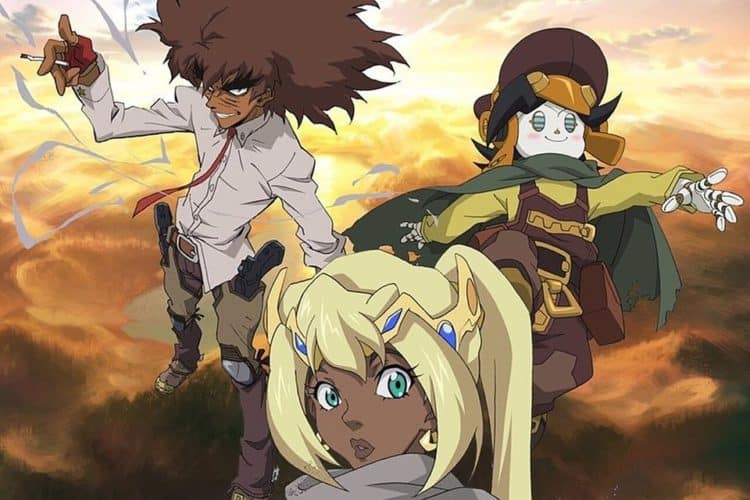 You may have noticed we love our Netflix. Ever since they put Blockbuster out of business, we’ve been fans of all the outstanding movies and shows they offer with such easy access. When they launched Netflix Originals, we were in love, but they’re quickly becoming our go-to for great anime as well. If you haven’t yet seen the trailer for Cannon Busters, you’ll want to do that because this show looks absolutely amazing. Okay, full disclosure, we’re already watching the first few episodes, but no worries, we won’t spoiler anything too juicy here. We’ll only share some MILD SPOILERS!!! It is a great show.

Things We Love About Anime

Let’s talk about what makes anime so fascinating to audiences of all ages. There are quite a few tropes that make the genre really pop for us. From big-eyed girls and talking animals to bounty hunters and crazy costumes, anime is everything the original cartoon animators thought their art would become. It’s aimed at adults with both bad-boys and cutie poos, so it’s not hard to see the appeal. There’s something for everyone. Cannon Busters is a superb blend of all the best things about anime.

First and always, giant transforming robots have had our attention since the ’80s. We blame and thank the Transformers for that. Gundam came along later for us, and we loved that too. This show features a tricked out car that can change form as well, but not into a world-saving, humanoid, robot fighter. Instead, it turns into a giant humanoid bull-headed robot fighter. Sure, it’s a fine distinction, a Robo-bullfighter named Bessie who functions as both transportation and a backup for tough situations is pretty cool.

Sam, the adorable female friendship robot who’s just looking for her buddy the prince is everything we need in a female lead robot. Instead of the traditional sexy garb, her clothing is more modest. Sam avoids the sexy robot stereotype by skipping the witty innuendo-filled banter and blatantly asking for new buddies and assistance with the innocence of a child. She might be a little too saccharine to handle if it weren’t for the fact that she’s also a Cannon Buster. You can read that as ‘weapon capable of defending her new friends and doing serious damage. She is both damsel in distress and the baddest thing on two legs at once. Any leading lady who doesn’t need a big strong man to save her gets our seal of approval.

So many great animes draw from the idea of space cowboys, and it’s always worked for us. Saloons and over-makeup filled ladies of the evening, gun battles and lots of desert scenery remind us of a simpler time. Then an artist adds a few aliens, cyborgs and futuristic touches to make it new again. Mercenaries and a snarky villain who’s probably not as bad as they are technically, plus a lot more likable is always a worthy watch. Cannon Busters has a runaway prince, and a snarky undying bounty with tattoos and a devil may care attitude.

Things We Love About Americanized Anime

Perhaps the most delightful and entertaining part of Philly the Kid’s relationship with his car is her method of operation. Though we admit that calling a bestial robot bull “Bessie” is adorable too. Bessie doesn’t run on grass and hay, but neither does she seem to require gasoline or other fuel per se. You can only turn on this pink Cadillac/red bull with a coin. Like a video game, you have to pay to play. In fact, it takes one to run her and four tokens for beast-mode. Clearly, LeSean grew up in the ’80s watching Cherry 2000 and Akira. Playing at the local arcade and pumping quarters into the machines for one more chance at life is such a retro amusement. It gives us all the feels to see it resurrected in some future space-desert world.

With a dash of Cowboy Bebop, a smidge of Afro Samurai and a whole lot of pop culture references thrown in with sly and cunning tricks. The punny quality of things like the red bull who is also a bullfighter makes us grin. The grownup robot version of a Gunslinger Girl appeals to us differently. There’s so much to love here we could write ten articles about why you should add this to your watch list. Instead, we’ll leave you with this thought: Whatever you want in your anime, LeSean has managed to pull it all together somehow and make it work. It’s no real surprise with his incredible background. We’ll be waiting to see if there’s a second season coming.