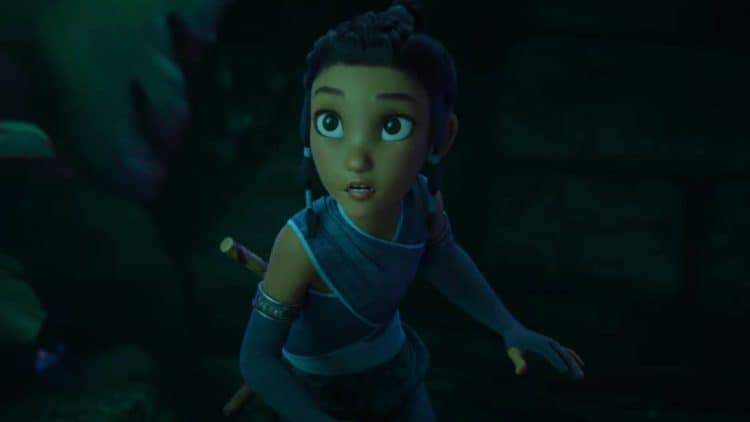 Does anyone remember the level of excitement that came when Brave was first introduced, or when Moana came out? So far that’s what it feels like for Raya and the Last Dragon since there’s been some buzz and excitement, but not a huge amount for one reason or another, as though Disney might be holding their breath just a bit to see how people are going to react to it. From the start the trailer makes it look and sound unique and exotic enough that it would appear to be something that people are going to go nuts over, but if there are any points to the trailer that might detract from it for anyone it’s that first, it’s in English despite the fact that it’s definitely not featuring a white cast. But as one might argue, and rightfully so, it’s being launched in America, where people want to hear one of the most dominant languages and not have to read subtitles all the time. For showings in other countries, it would of course need to be dubbed in the dominant language, which sounds like a good idea despite the fact that it’s likely a bit expensive to do. But considering that it’s also being created by an American company, and the fact that Kumandra is a fantasy realm, and that Kelly Marie Tran is taking on the voice of the main character, there shouldn’t be much of anything to gripe about.

Some folks are already saying that it looks and sounds like a Legend of Korra ripoff, which might carry some weight since, despite the fact that she’s not playing with elements and has no control over them, Raya’s determination and grit are enough to make this assumption. Of course, if that’s all people have to go on then they’re going to need a bit more to discredit this movie since it already looks pretty cool and should be entertaining enough for a lot of folks since it could be a nice family movie as well as entertaining for kids that want to see a lot of action. Besides, when one really boils it down there are a large number of factors that can tie a lot of movies together when it comes to the characters, the settings, the action sequences, the quest, and the main point behind the whole movie. If that’s what we’re going to do then, of course, Raya’s tale is going to mirror A LOT of movies that have come before her, possibly even Moana’s and that of other female protagonists since it’s obvious that it’s going to be up to her to sort out just how the many tribes can come together for whatever purpose is needed.

Some folks are bound to say that it’s another mark against diversity for a number of reasons, but to be realistic this would indicate that it’s another mark FOR diversity since Raya is most definitely not Caucasian, she’s not a damsel in distress, and to be honest, those that might say anything about this are now looking for excuses to criticize movies that don’t check every single box on their own personal list of things that need to be present in any given project. For a while now it feels as though a story just can’t be good enough unless it encompasses every possible example of the world around us that it can, and is even more unacceptable if it’s shown to not embrace diversity just for the sake of it. Watching the trailer it does feel as though this movie is taking a diverse look at a FANTASY world, and it could be a good attempt to create something that’s positive and tells a compelling story. Hopefully, those willing to nitpick just about any movie to death will take note that it is a fantasy movie and will factor in the idea that any given story doesn’t need to show a representation of every element of the real world in order to be valid. So far, the movie looks as though it’s focusing intently upon a fairly diverse population, which should hopefully pacify a lot of people, even if it doesn’t fit their quota of what they feel is needed. The story needs to matter a little more than the form sometimes since it’s the story that keeps a lot of people in their seats when it comes to a movie.

So far the story looks like it’s going to be a lot of fun and will be able to stand up as another Disney movie that is capable of continuing the magic. Whether or not it’s going to be treated as a big deal is hard to say since it doesn’t sound like it so far. But things could change rather quickly if the Mouse House decides to really push this story for what it’s worth.