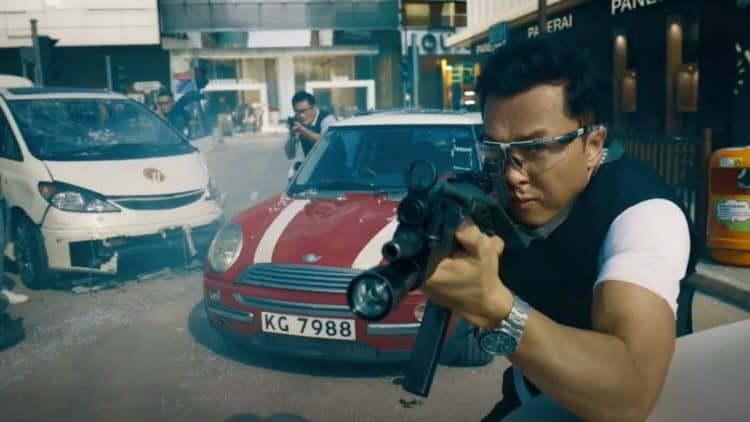 First things first: does Donnie Yen ever age? The obvious answer is yes since a lot of us have seen him in other movies when he’s looking a little worn down either thanks to the makeup department or simply because he’s in his late 50s at this time. But the guy looks as though he could keep going for a while when it comes to making action movies and still keep people entertained with everything he does as he’s a great actor and tends to come up with one impressive performance after another. It’s very fair to say that not every movie he’s made has been an instant classic, but many of his movies have been highly enjoyable simply because they manage to pair action with a decent tale that comes together to create something that might not be award-worthy but is always worth taking a look at. In Raging Fire, he plays an officer of the Regional Crime Unit that is as straight-laced as they come and is one of the most exemplary officers in his unit. But his protege, Yau Kong-gno, doesn’t always agree with his by the book methods and tries to do things on his own by taking shortcuts. Long story short, this is going to be a mentor vs. student type of movie.

That’s what it looks and sounds like at least, and it’s one of the more interesting premises out there since it pits two individuals that happen to know each other on a deeper level than many enemies since they’ve been around each other far longer. Throughout a lot of his movies, this appears to be the role that Yen excels in, since being the teacher, the mentor, is what has really made him stand out in a lot of ways. He’s also been the type that has been the rogue, the wildcard in some respects, and that’s worked as well.

It’s amazing to see how Yen’s career has shaped up over the years. He started acting back in the early 80s and managed to pick up several roles along the way, even starring with Jet Li a couple of times over the years. He didn’t really start rolling along until around the time he starred in Highlander: Endgame and Blade II. By that point, people were getting to know him by his fighting style and appearance, and not long after that, they began to remember his name as Donnie’s fame continued to grow. By the time the 2000s rolled around he was definitely a big name in the US and was getting even more popular as the first Ip Man movie came out. A lot of people were heard to question his credentials and whether or not he was an actual martial artist or if, like some actors, he was simply exceptional at selling the movements. The fun thing about this is that Donnie is a highly-skilled martial artist and a fight choreographer, so he not only knows that fights in the movies aren’t entirely real, but he also knows how to make them look impressive in order to get people to forget this fact.

He is the genuine article but it’s very likely that much like any martial artist he would agree that a fight tends to break down much quicker in real life than one might see in a movie. Some of the fight scenes that Yen has been involved in throughout his career in the movies are definitely cinematic, but in real life, it’s not entirely likely that people would give each other the kind of space that opponents in the movies grant. What’s really fun is that he’s managed to choreograph fights that are grand in scope and involve a lot of cool, complicated movements and wide, sweeping motions as well as short and very pointed movements that feel a little more sensible. In each fight, he’s been controlled and precise with his movements, and this is one reason that he’s fun to watch since he’s employed a few different fighting styles that he’s learned over the years. His fight scenes are also a lot of fun to watch since they’re usually quick, hard-hitting, and actually kind of wild but also very controlled.

Raging Fire kind of sounds like a movie title that might have been popular in the 80s or 90s but until we get to see what the movie is all about it’s best to reserve any judgment since some of the best movies have some of the simplest titles. Plus, anything with Donnie Yen in it usually instills a lot of faith in the movie until one gets to see it and determine whether or not his part really made a difference. I’m looking at you Highlander: Endgame, since his fight scenes were great, but he could have used a bigger part.