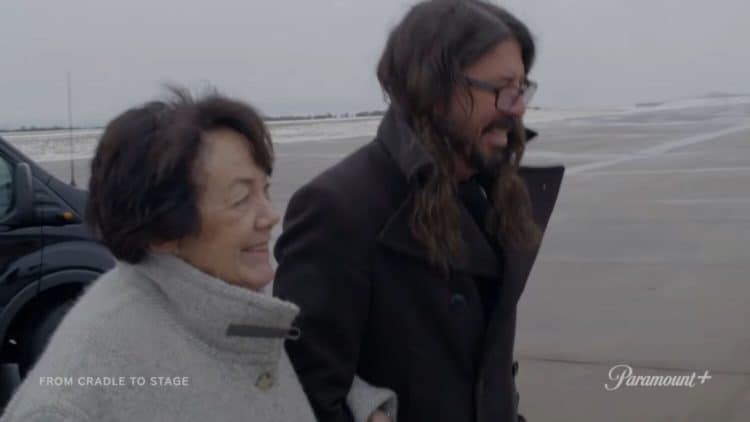 Before anyone gets into the idea of ‘what about the dads and their point of view?’ let’s back that up and make it clear that the musicians being featured in From Cradle to Stage weren’t all raised by a single mother, but the focus is based on a book written by the mother of Dave Grohl, Virginia, and as such one can imagine that the idea is going to be how the mothers of various musicians helped to shape the careers of their famous children by supporting them through thick and thin, and enduring whatever they had to in order to watch their child become famous in the music industry. There’s no doubt that fathers played a part in this too, but focusing on the matter at hand is a better tactic than trying to ascertain why fathers aren’t getting their equal mention at this time. Plus, the series starts off on May 6th, just a few days before Mother’s Day. It’s also fair to say that the relationship between an individual and their mother is usually bound to be far different than their relationship with their father. It is what is when it comes to the show and already the trailer makes it appear as though it’s going to be an insightful look into a desired profession and lifestyle that a lot of people look at with stars in their eyes as they figure that being a musician must be a lot of fun. A lot of people tend to wander into the music industry or try to, thinking that all they have to do is be better than everyone else in order to get a recording deal, but as it will hopefully reveal during the course of the show, the struggle is hard on everyone involved, not just those that are attempting to get noticed.

Much like any performance art, music is a file that thousands if not millions of people have attempted to break into over the years, and it’s something that takes both talent and the ability to project a presence in front of people that isn’t always present in everyone that tries. There are people that have genuine talent and yet are so incredibly shy that getting them on stage becomes the most difficult part of the matter since to be certain, getting in front of people is a big part of a musician’s career and if one can’t bring themselves to do this then they’re limiting themselves in a huge way. This could be where the mothers of certain artists have come in since while some likely haven’t been too supportive, others have gone all-in with their kids or have at least been there to support them every step of the way, making certain that they have the kind of encouragement that they need and the love and kind words that are necessary at times in order to keep them from stepping away from something that could be their ticket to greatness. It’s not bound to be easy, since nearly every parent wants their child to do something that makes them happy, be it great or moderate. But the mothers of famous musicians give the feeling that they might have had to endure quite a bit of fear for their child’s future and quite possibly might have supported them but still felt that breaking into the music business was bound to be unbearably difficult.

The series will of into the difficulties that each artist had to face and how their family had to face it with them, and obviously how supportive their mothers were during this time in their lives. While it might not sound applicable, pretty much any parent is going to feel the same way when it comes to watching their child attempt to break into something that has a high risk of failure but, if they’re lucky, can allow them to become famous beyond their wildest dreams. From the start, it’s important for any parent to simply understand why a person loves what they do and what it means to them. This is what separates the parents of the stars from a lot of other parents, since as one can imagine, watching a child fail is not an easy task, but being there for them through every trial and tribulation until they find their path and become what they desired is bound to be a very proud day in any parent’s life. The life of a musician is, as many people have believed for so long, kind of a rough road simply because at any given time there are thousands of skilled musicians in any given area that are trying to become something bigger and are willing to do just about anything. Getting noticed is only the first step since staying the course is what separates the famous from those that play for fun. Along the way though, the support of one’s family is of absolute importance.