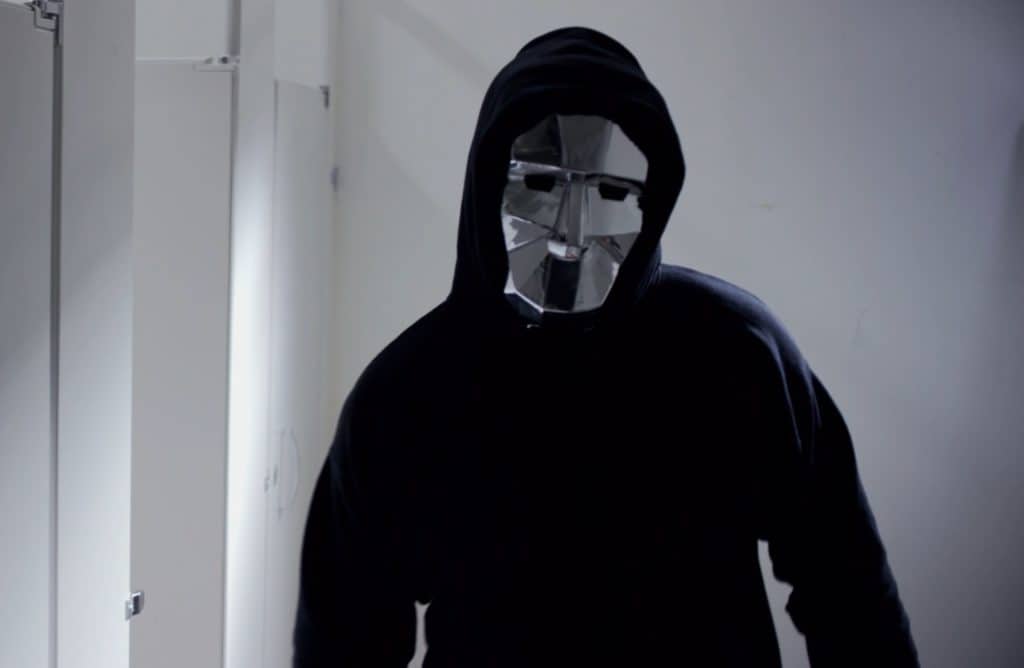 It’s not hard to guess what a lot of people are going to be thinking once they see the trailer for Initiation since the commonality seen in many college-based movies has a lot to do with what many people think goes on in fraternities and sororities. While there are likely plenty of issues to be had, the idea that every single organization across the US would follow the stereotypes and seek to emulate them is a troubling idea that is pushed by the over-generalization that if one or two locations suffer this kind of thing, then ALL of them must be susceptible to it. That’s what makes it so easy to assume that every popular fraternity or sorority is bound to harbor secrets, that colleges will bury secrets, and that there are dark things in the corners of every institution that one could name. In light of using this kind of thinking for a horror movie, it’s highly successful since Initiation does look like something that might take Scream, Urban Legend, and a few other movies and combine them into something that might provide a decent scare or two. So far the movie doesn’t appear to have any of the inherent humor in it that many college-based movies have, but there could be more to the movie than the trailer is showing at the moment, which means that it might be that what we’re seeing isn’t the whole picture.

The fact that the killer is hunting down pledges is kind of interesting, and the fact that the killer is using a drill is definitely bizarre since it’s not a weapon that many people happen to think of that often, though some horror movies have made use of it, such as Pet Semetary 2 and Hostel. But getting back to the movie, college settings usually bring up a wide list of possible scenarios that are bound to be used, such as the helpless young woman that seeks to hide in a dark place but finds that it’s the last place she should have picked. Then there’s the bathroom stall murder, which has actually been less used in the past, but is just as effective, as it was in Scream 2. In essence, a lot of horror movies currently being filmed and released are proving to be recycled ideas that take advantage of a good number of ideas that have been seen throughout the years. Some of them tend to work no matter how often they’re used, while some might be worth an eye roll and a mild grumble since they haven’t really stood the test of time that well.

But the fun thing about horror is that it doesn’t take a lot of tweaking to make it work, since the dread, the fear, that keeps people coming back is easy to tap into and it’s almost as easy to employ in a number of different ways, familiar and different, that can be utilized to make people jump in their seats. One thing about this movie is that it would appear that the silver, blocky mask that’s used by the killer is seen earlier in the trailer, meaning that it’s likely a familiar sight to some of the individuals in the story and would possibly allow them to lower their guard, or not, depending on their knowledge of it. This mask isn’t exactly the most terrifying thing ever devised, but it’s also spooky simply because it’s featureless, it doesn’t offer a clue as to who might be behind it, and the dark and formless clothing helps create the illusion that it could be anyone. When one factors in the admission that the college has been harboring a dark secret about one of its students it becomes even more ominous since there have been plenty of stories focusing on revenge, on a person that people didn’t realize was still alive, and on various other characters whose motivation is strong enough to perpetrate such a terror-filled killing spree. It does feel that the killer in Initiation is going to turn out to be either a total surprise or someone that people were holding as a suspect from the beginning. It doesn’t feel that there will be some mega twist that will come out of nowhere, but I could be wrong. Sometimes the twist that people are expecting turns out to be a gentle J curve that doesn’t tweak everyone’s emotions as much, while the horror leading up to it is the main thrust of the movie.

One thing that sounded especially ominous comes when two of the young women are hiding in what looks like a classroom. After the lights go out, the drill can be heard nearby, making it clear that the killer isn’t too far away. That kind of terror is what we’re looking for, the near and always present type.