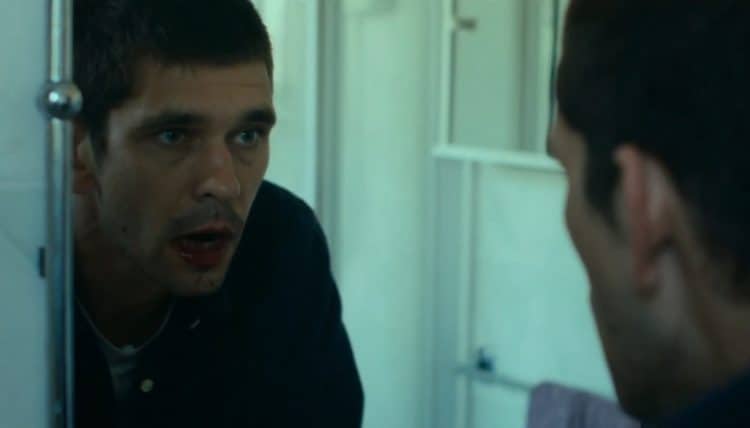 There are those movies that make people question what’s going on inside the heads of those that have what amount to menial, depressing jobs that don’t really allow them that much upward mobility and tend to drag on day after day since there’s apparently nothing else this person can do. Those are thoughts that the average person might have and thoughts that someone might entertain if they sit in the dark and wonder about something other than themselves. But Surge is the type of movie that takes a wild guess at what might happen if the mental cogs of one of many workers out there that people depend on slips. The result might be what we’re seeing in this movie or it might be something entirely different depending on the person. Ben Whishaw is being praised for his wild antics in this movie and to be fair, he should. Just from looking at the trailer, it’s easy to feel the manic, insane energy that’s running through the movie, almost like an electric current that sparks here and there once it reaches a particularly frazzled point in the conduit.

A lot of us have likely felt this way, worn out and somehow close to snapping if someone says the wrong word or the wrong thing happens at the wrong moment. Working as security isn’t one of the best places to have this sudden breakdown occur, but it’s not the worst either. Looking at Joseph’s life, played by Whishaw, it would appear that everything is pretty humdrum and not exactly out of whack as it might appear. But the mundane life that people lead on occasion can be every bit as dangerous as the anxiety-inducing jobs that threaten to cause a person to snap and explode every now and then. Let’s face it, dealing with people is a difficult task at times and dealing with them as they attempt to get past a security checkpoint is even worse since people tend to flip a great deal of attitude when they believe that they’re being inconvenienced in any way.

But the snap that comes finally appears to happen in a way that disconnects Joseph from reality in a way that isn’t complete but only keeps the most tenuous of links as he runs amok, robs a bank, gets in a fight, and basically turns his life inside out as he attempts to simply ride the mania wave as far as he can. This sudden surge is enough to make a person think that he’s flipped his lid and gone wonky, but at the same time there are a lot of us out there that feel this thinning of the membrane between rational thought and the need to just act, and act, and react, and keep moving instead of doing the common, everyday routine that we’ve been doing for so long. It’s a crazed type of elation that brings this to mind since quite honestly that veil between being calm and orderly and being able to simply run and be out of control is not thick or as opaque as some might want to think. That’s what makes this movie the type that might hit home with a lot of people since they could possibly take a look at it and say ‘that’s me’, or ‘that could be me’.

It’s a scary thought for some, especially since the idea of working with and around people is something that terrifies some people and just bores others. Surge is a look into what could be if we lowered our inhibitions or simply felt them fall away like illusions that were never real in the first place. The thing is, Joseph has a life, to begin with, albeit a droll and rather unsatisfying life, and he has people in his life, but apparently no one that can alleviate the stress he’s been under, so it’s likely that this madness, this surge, was a long time coming and something finally triggered it in a way that made it possible for him to embrace or fall into it without knowing.

The thing about this movie is that walking into it one shouldn’t have any expectations, and possibly tamp down their biases since realizing what people around us go through and what might be eating at them at any given moment is wiser than thinking that other people don’t have issues. It’s not an invitation or a demand to want to understand everyone’s frame of mind, but it’s smart to think that others around us could possibly be under enough stress and don’t need to be pushed any further. It’s a common and very cliche way to respond to life without a doubt, but it’s real at least, and being decent to people for no reason at all isn’t that tough.