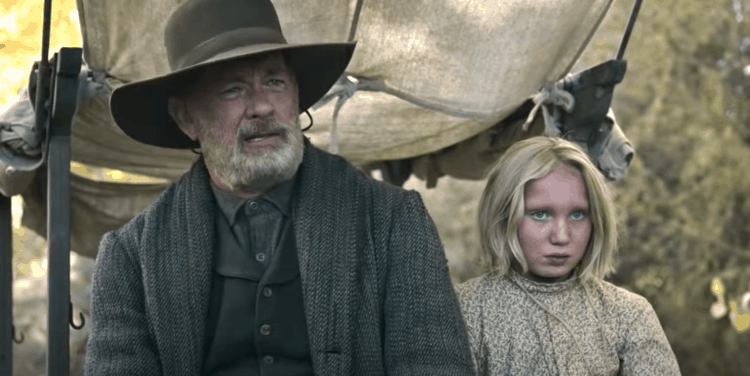 Tom Hanks certainly knows how to pick his roles and tends to select those that force his characters to make hard decisions. In News of the World, he’ll be playing the part of Captain Jefferson Kyle Kidd, a survivor of the Civil War that goes from town to town, reading newspaper clippings of what’s going on in the world to those that are willing to pay for the pleasure of knowing what’s happening in the nation. While that might sound like an odd career choice it’s apparent from the trailer that it suits the main character just fine as it keeps him from putting down roots anywhere, which might be preferable as he’s a widower without a solid family life and appears to prefer such an existence. When he comes upon a young girl whose family was raided by the Kiowa people though, life becomes rather complicated as he’s tasked with delivering her to family members she doesn’t remember and likely has never known. Having been raised by the Kiowa, young Johanna speaks their language, not a bit of English, and attempts to run away more than once, as it’s stated in the book, and is likely to happen in the movie. One has to imagine that being torn from one life is traumatic enough, but to be torn from another life, no matter how hard it is, would be even worse.

Every actor has their niche, and some are able to branch out quite often and prove that they can satisfy just about any fan with the right act. Tom Hanks has proven to be one of those that are able to come up with an act that a lot of people will like, but one of his most prominent roles is usually someone similar to Captain Jefferson Kyle Kidd, a person that’s content to live the life that he’s chosen for himself, even if it’s not the ideal life that many people would think of. The character is someone that would gladly settle down if he had a reason, or so it feels, but is bound to make his way onward in life, not setting down any roots, largely because he has a belief in keeping people informed and somehow bringing them together in a very uncertain way, and possibly because he has no reason to stay in one place any longer. It’s a bit difficult to explain with mere words, but the wanderlust that grips such characters isn’t always so simple to explain since it’s not always by choice that these characters continue to wander, but also by hidden necessity that they won’t often admit to. Sometimes staying put can be stifling, and then again, sometimes it allows a person’s past to catch up with them, which can be even worse.

Another quality that Tom Hanks has brought to mind in a few of his movies and obviously brings to bear here is that, especially as he’s grown older, his characters have been seen as protectors, people that definitely have their secrets, but are still capable of thinking outside of themselves in order to shield others from the world around them to one purpose or another. A person could definitely argue this point but there are a few movies in which Hanks’ characters tend to protect those around them in one manner or another, no matter if it’s obvious, as it was in Saving Private Ryan and Forrest Gump, or slightly obscure as one might think in movies such as The Terminal and A Beautiful Day in the Neighborhood. Hanks’ characters tend to be, a lot of the time, individuals that care about others and seek to protect them in some manner no matter if it’s direct or indirect, and this current movie is no different since Captain Kidd will be protecting Johanna in a very obvious fashion. The dangers that both characters will face are bound to be historically accurate in many ways since al lone need to do to be reminded what the country was like after the Civil War is pick up a history book to be reminded that the country was hurting in a big way after the bloody conflict and needed some form of hope that would allow people to reconnect and at least attempt to heal.

This is kind of interesting to see a movie such as this since many people would remark that its timing is interesting since the nation has been undergoing a few trials throughout 2020, and while another Civil War hasn’t kicked off, thankfully, the general feeling is that people need to be reminded quite often what it is that keeps us together. As far as the rest of the story, Hanks and his young costar are bound to remind a lot of folks why hope isn’t always found on the perfect path, but it’s always worth traversing said path to keep that hope alive.