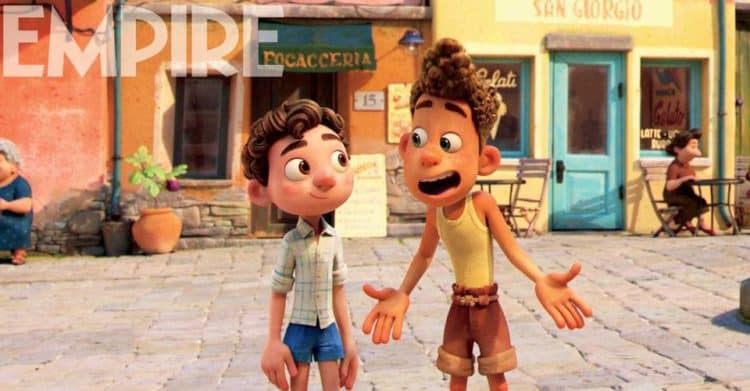 It’s time to head over to Italy for one of Pixar’s next animated installments as Luca will be arriving this coming June, and so far it sounds like something that will be kind of cute and able to be understood by kids while also intelligent enough for adults to pick up on. In a way, this movie already sounds as though it’s bound to be connected to many elements of storytelling, and many stories in the process, since despite taking off after the creator’s childhood memories, it does contain several hints of this and that according to what we’ve already been given. Two sea creatures, Luca and Alberto, want to see what it’s like to experience life on land and while they’re on dry land they appear as young boys and none are the wiser. They even meet and befriend a young girl that may or may not be an issue depending on how the story goes since at a certain age many children don’t really worry about much more than having fun and including one another in this or that unless interests collide and something untoward happens that splits them apart. But that’s getting a little too far ahead at the moment since without that much information yet it’s easy to think that past movie experiences could be used to tinge the overall feel of this movie and what it’s going to show people as it moves forward.

In a sense it does feel like The Little Mermaid meets Pete’s Dragon in a very telling way, but with a very different location and a different story that’s meant to create a different feeling altogether. The idea of the two main characters being magical sea creatures feels like a bit of childish whimsy that could be seen as one person’s long-awaited dream coming true after many years of having kept it close and perhaps running it through one revision after another. If those that grew up hearing about old legends, myths, and other stories were able to take their experiences and place them on the big screen it feels likely that we would see various cultures take root on the big screen in a manner that would be education as well as enlightening since every culture has their own shared tales and experiences that have gone into the making of one society after another. One thing that is both frustrating and interesting at the same time is that the myths, legends, and fables that some folks grow up to think of as juvenile and rather childish are those that have helped to create civilization as we know it in a big way. Whether the old ways that were created by those tales are outdated or no longer followed isn’t really an issue since to be fair, those that want to forget how one society after another was founded are those that tend to forget that mythology and legend used to be insanely important since this was how we viewed the world and how we believed things worked.

Hopefully Luca will be a return to the child-like wonder that a lot of us can remember from our younger days and a joy that came with knowing that no matter how complicated things get and how far beyond the fables people move, there is always a reason to keep them around and to recall that they do have a very important place in civilization. It does feel that far too often there are people that forget the idea that the stories we tell are important and vital when it comes to humanity since they carry lessons, history, and many other elements pertaining to humanity and the many complexities that come with living in this world. Luca could be a simplistic look at the friendship and the magic that is felt when one person has another to rely on and to experience life with, but it might also be about hard lessons and a better understanding of what it means to be human. Whatever happens in this movie it does feel that it’s been geared to make people feel good and possibly deliver a story that a lot of folks will end up agreeing is one of the more uplifting stories of the year. If nothing else, especially if it’s able to be shown in theaters, it will be something that will be viewed as a bit of hope that will put a smile on the faces of those that go to watch it.

Luca is just one of many movies that are being anticipated this year, and like many others, it’s no doubt going to be viewed with an eye that will be hopeful as well as discerning. So far the story sounds like fun, and it’s a big hope that it will be something the entire family can enjoy.