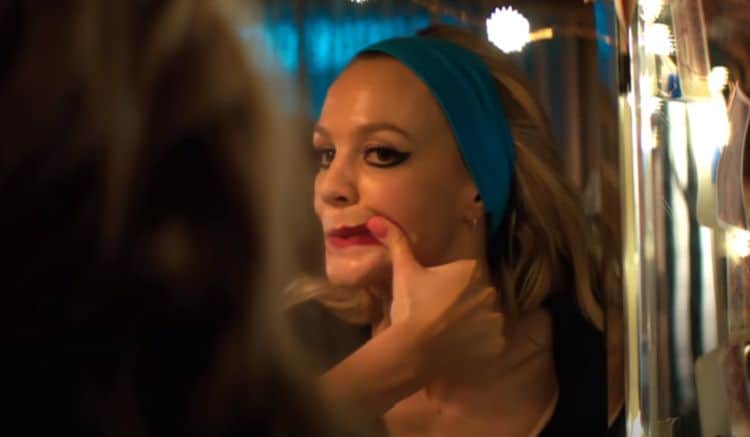 If there’s anything to say about Promising Young Woman that is as neutral as it can be, it would have to fall along the lines of describing just how disturbing the overall premise is considering the undeniable fact that the lead character is targeting men who, admittedly, are ‘asking for it’ by being the biggest creeps imaginable by seeking to take advantage a woman that appears to be highly intoxicated and less capable of making sound decisions. Then the other shoe drops and we come to realize that she’s leading up to the revenge plot that her actions appear to be practice for since something deeply traumatic happened to her in the past and she’s seeking a form of revenge against those that managed to get away with the act because…reasons. No, seriously, if you’ve watched Law & Order: SVU, then you’ve likely seen this kind of story play out more than once, and you might have even seen something like this happen during the show’s long and tumultuous history. The lead character, played by Carey Mulligan, is actively seeking revenge and apparently needs practice before she gets on with her personal matters since otherwise the act of dolling herself up and learning various tricks on how to appear sloshed without actually getting to that point is highly premeditated and speak to a very vindictive attitude that’s hard to argue with when it comes from someone that’s been wronged in the past, but is still problematic as it sets a very dangerous precedent.

Also, as much as women don’t care to be objectified in movies it should be noted that men don’t always enjoy this type of treatment either, no matter that to some, such a statement might elicit a ‘poor baby’ and an explanation of how Hollywood and possibly the world is still male-dominated. Here’s the trick though, showing equality doesn’t work one way, not in life and not in movies, and while the lean towards the lead character having a well-defined reason for her actions is all well and good, painting the men she deals with as lecherous scum is definitely a reality that many people live with, but assuming that wherever she goes in order to set herself up as bait, it’s possible that the men might actually ignore her or that the bartender would call for a cab to take her home. Why you ask? Because people falling asleep on couches and in booths is not good for business, no matter if the place is a dive or a high-end bar. Plus, attentive bartenders and other staff will make it known when a customer has become so intoxicated they can’t stay awake, which could be a dangerous situation that might need their immediate attention. In short, this ploy isn’t bound to work as well as the movie might make us believe since one, places with a liquor license have to be much more attentive, and two, if you’re too drunk to stay awake then it’s their responsibility to get you home however they can, as most bars don’t want to be connected to an incident of any sort.

The point behind the movie is easy enough to get, but the methods used to get there are questionable considering that there’s no such thing as equality here, as so many people are pushing for. Were a man to be put in this role it would be a rather boring movie since many women want nothing to do with a drunken male at a bar. But on the flip side, many men want nothing to do with a woman that’s this visibly drunk, unless they’re complete creeps as the movie is portraying. Even then, there’s still the problem of the attentive bartender and/or servers that tend to circulate around the space. The idea here is sound enough, but the image of a woman falling down at a bar because she’s that drunk isn’t one that strikes any sense of realism. Sadly, on a college campus, where there are parties within frat houses it is apparent that this is still a problem. But in an establishment that is dependent on its liquor license, this movie has derailed immediately the moment that a woman is seen nearly falling down because she’s that drunk. And if a taxi or an ambulance is called and she decides to drop the act, it’s likely that she won’t be welcomed back since like it or not, such deception isn’t bound to be taken lightly by the owner of the bar or those that work there, since they could easily be implicated in her quest for revenge.

So kudos to the movie for telling a revenge tale, but in terms of realism, the director of this movie could have done a bit more research in order to get things right. Having worked at more than one bar and 86’ed more than one drunk individual, and a few that were simply trolling for people to take home, I can say with all honesty, and in anecdotal fashion obviously, that I will be watching this movie, but I’ll probably be more interested when the lead character finally looks to get her well-earned revenge if only to see something worthwhile after the bar-hopping scenes.